The Malaysian government had stirred a controversy after offering tips on social media as to how wives should behave during the coronavirus lockdown that began in the country on 18 March.

The Malaysian Ministry of Women, Family & Community Development shared a series of posters on Facebook with the hashtag that translates to #WomenPreventCOVID19, reported Al Jazeera. 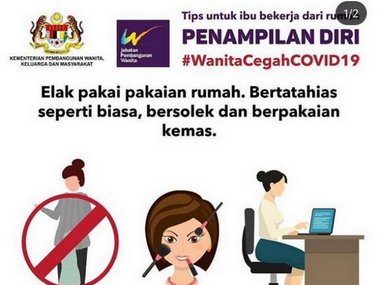 Malaysian govt later issued an apology for these posters

However, the government had to offer an apology after its move sparked outcry, with critics accusing it of sexism.

In one of the posters, a man can be seen sitting on a sofa, asking a woman to stop being "sarcastic", if she wants him to help her with household chores.

Another campaign poster suggested that women should use baby voice of cartoon character Doraemon instead of nagging their husbands, the report added.

Other tips asked women to put makeup and dress neatly instead of wearing casual clothes.

After the posters sparked outrage, the ministry issued a statement saying, "We apologise if some of the tips we shared were inappropriate and touched on the sensitivities of some parties."

Netizens were shocked by the government’s advisory and criticized the move.

A Twitter user asked why the government has not shared tips to deal with domestic violence.

Avoid wearing home clothes. Dress up as usual, put on make-up and dress neatly. OMG! This is what Rina, our Minister of Women, Family & Community Development thinks is important during the #COVID19 lockdown? No tips on how to deal with #DomesticViolence? Just state DV is a crime. pic.twitter.com/FfswtPBIPH

There was one user who questioned why husbands shouldn’t follow any rules. “I think my husband should speak to me in a Doraemon like voice. That will amuse me to bits and put me in a good mood,” she added.