Prime Minister Narendra Modi will inaugurate the Mahakaleshwar Corridor in Madhya Pradesh’s Ujjain on 11 October. It’s part of an expansive redevelopment project of the Mahakaleshwar temple complex, which houses one of the 12 jyotirlingas, and its surrounding areas

The construction of the Mahakaleshwar Corridor in Ujjain has cost Rs 350 crore. This is part of the first phase of the redevelopment of the temple complex and its surronding areas. PTI

The ancient Mahakaleshwar temple in Madhya Pradesh’s Ujjain is getting a big makeover. The first phase of the redevelopment plan is over and Prime Minister Narendra Modi will inaugurate the Mahakaleshwar Corridor on 11 October.

The story of the temple

Mahakaleshwar temple houses one of 12 jyotirlingas, considered the most sacred of Lord Shiva’s shrines. It is located in the ancient city of Ujjain alongside the holy river Kshipra.

According to Hindu mythology, the temple was built by Lord Brahma. The Mahakal lingam is believed to be swayambhu (self-manifested) and the idol of Mahakaleshwar is said to be dakshinmukhi (facing the south), a feature found only in this temple.

The temple is also one of the 18 Maha Shakti Peeths – shrines which have the presence of Shakti because some part of the corpse of Sati Devi fell there. The upper lip of the devi is said to be in this holy place and the Shakti is called Mahakali, according to Hindu mythology.

The temple in its present form was built by the Maratha general Ranoji Shinde in 1734 CE.

The plan for the temple revamp

In 2017, the Madhya Pradesh government announced the plan to expand and beautify the Mahakal complex that houses the temple and its adjoining areas.

The temple complex which is spread across two and a half hectares will be expanded to more than 40 hectares and this includes Rudrasagar lake. The redevelopment plan is expected to cost Rs 705 crore.

The Mahakal Maharaj Mandir Parisar Vistar Yojna, as the project is called, is being undertaken in two phases and is expected to increase footfall in the city from 1.50 crore to three crore, reports The Indian Express.

The first phase of the project is now completed.

PM Modi will inaugurate the first phase of the Mahakaleshwar Corridor, which has been constructed at the cost of Rs 350 crore.

The newly constructed corridor will be called will be known as Mahakal Lok, CM Chouhan announced on Tuesday after the first-ever Cabinet meeting in Ujjain.

The first phase of the project includes the redevelopment of the Mahakal temple campus, facelift of the Rudrasagar lake including a bridge, development of Rudrasagar banks, Mahakaleshwar Vatika, Dharmshala, ann kshetra (food hall), preaching hall and a lotus pond.

The temple area will be increased by almost eight times the earlier one once the project is completed. 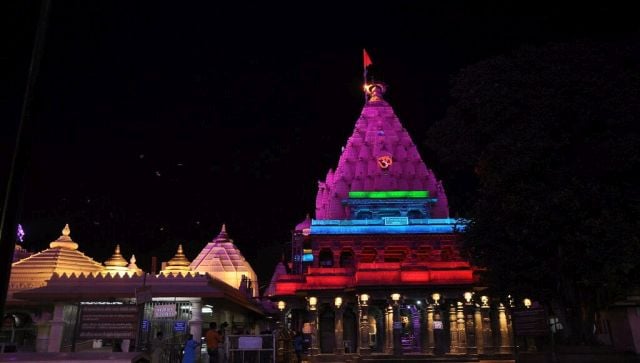 The campus extension scheme will increase the temple area to almost eight times what it was earlier. Image courtesy: Ujjain Smart City

A pedestrian corridor has been constructed to connect the entrance to the temple complex. This area has been dotted with statues and murals depicting stories of Lord Shiva, according to The Indian Express. There are eateries and shopping stores along this route.

The congested nearby markets have been dismantled and shopkeepers are designated commercial areas to carry on with their business.

Coming soon in the second phase

The second phase is expected to be completed by June 2023 and will cost another Rs 300-odd crore. A lotus pond with a statue of Lord Shiva is built in the new temple complex. Image courtesy: Ujjain Smart City

Areas around Ujjain will be revamped. A dharmshala and a Kumbh museum will be part of the plan, according to The Indian Express report.

Heritage places near the complex will also get a facelift while keeping the heritage site intact.

Under Amrit Yojana, an underground sewer system is being developed so that drain water isn’t discharged into River Kshipra or Rudrasagar.

The politics over the plan

At the Cabinet meeting held in Ujjain on Tuesday, the Madhya Pradesh CM ceded his seat to Lord Mahakal’s portrait. Chouhan said that tenders were invited to start the first phase of the project during his earlier tenure but work was stalled because of the change in government. “… we visited Ujjain in 2020 and reviewed the work in detail,” he said.

According to the CM, the project was conceptualised for Rs 95 crore in 2017 but when the Congress government came to power in 2018, no progress was made.

However, the MP Congress president Kamal Nath said that his government allocated Rs 300 crore for the Mahakal temple and set up a committee to execute the plan in time.