Eight African cheetahs were released in Madhya Pradesh’s Kuno-Palpur National Park on Saturday by Prime Minister Narendra Modi. We take a look at the history of this sanctuary, which was once the hunting ground of maharajas of Gwalior, and why it was picked for the grand reintroduction project

Eight African cheetahs, five females and three males, boarded a chartered cargo flight from the Namibian capital of Windhoek on Friday. They landed in Jaipur on Saturday. Seen in this photo is one of the female cheetahs, which was released in Kuno-Palpur National. News18

The cheetah is on the comeback trail in India, and that leads straight to Kuno-Palpur National Park in Madhya Pradesh. They arrived in Gwalior on Saturday from Africa’s Namibia on a special tiger-faced plane. Then the big cats were flown to their new home, Kuno in Air Force helicopters.

At Kuno, the eight cheetahs (five females and three males) were released in giant enclosures by Prime Minister Narendra Modi – it’s a birthday that is hard to forget. The arrival of the big cats has put the little-known sanctuary on the world map.

We take a look at its history and why it was picked for the crucial reintroduction project.

The rich history of Kuno

Madhya Pradesh boasts of the country’s most famous tiger reserves – Bandhavgarh, Pench, Satpura, and Kanha. In a state, which has dense forests on the foothills of the Satpura range and vast dry grasslands, this humble national park was largely forgotten until it was picked as the new home for the African cheetahs.

Located in the northern district of Sheopur, at the heart of the Vindhya range, the national park is dominated by grasslands, which are similar to the African savannas, and sparse forests. Most grasslands in Kuno are bigger than the ones at Kanha and Bandhavgarh. The sanctuary gets its name from the Kuno River, which flows through it from the south to the north, and is the lifeline of the forest. 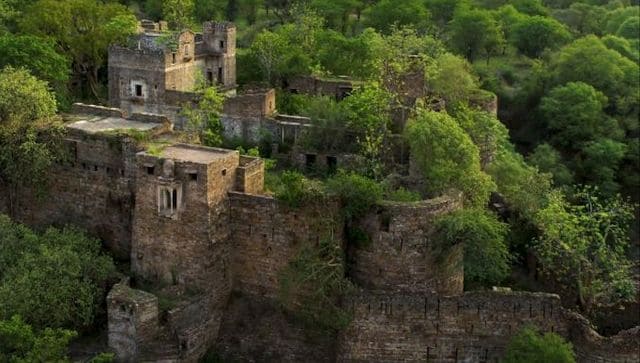 Inside the sanctuary are ruins of centuries-old forts, now reclaimed by the forest. Image courtesy: Kuno National Park

The park has a rich history, the ancient forts that dot the landscape, stand testimony. Five-hundred-year-old ruins of the Palpur fort overlook the Kuno river. Chandravanshi Raja Bal Bahadur Singh acquired this throne in the year 1666.

There are two other forts inside the park – the Amet Fort and the Maitoni Fort, which are now completely covered in shrubs and wild trees

Kuno was once the hunting ground of the maharajas of Gwalior.

The status of a national park

Kuno was reduced to a just tiny chapter in Madhya Pradesh’s wildlife story until it was notified as a sanctuary in 1981 and then upgraded to a national park in 2018. Spread over 750 kilometres of pristine wilderness, it is rich in floral diversity with more than 120 species of trees. The tropical dry deciduous forest mainly consists of Anogeissus pendula (Kardhai), Senegalia catechu (Khair) Boswellia serrata (Salai) and associated flora, according to a report in Nature in Focus. The mighty Kuno River that runs through the sanctuary is the lifeline of the forest. Image courtesy: Devendra Mahor/Kuno National Park

It is inhabited by carnivores such as the Indian leopard, Indian wolf, golden jackal, sloth bear, Indian fox and striped hyena. The herbivores found here are spotted deer, sambhar, nilgai, chousingha and blackbuck, the report says.

Situated between the Aravallis and the Madhav National Park, Kuno also serves as an important wildlife corridor.

Until recently, the park gate welcomed you with graffiti of lions, telling a story of its tryst with the majestic cats.

Asiatic lions ruled the wilderness of India for centuries. However, their habitat shrunk with urbanisation. Until the 1850s, they were spotted in the erstwhile pockets of the Gwalior state but hunting and poaching led to a sharp decline in population.

In 1920, Madhav Roa Scindia I of Gwalior was working on a plan to introduce lions to Kuno and massive enclosures were created in the sanctuary. Upon the king’s royal decree, a few were brought from Africa which he planned to release into the wild, according to the documentary Kuno: The Forgotten Pride. However, his dream remained unfulfilled and the lions perished.

Today, Gujarat’s Gir is the only abode for the Asiatic lion in the wild. However, since they have been reduced to one region, they have started venturing out of their protected areas.

Conservationists realised they need another home to protect the lions. Kuno was suggested since it was geographically isolated from Gir. After a detailed study in 1991, the Wildlife Institute of India (WII) came up with three forests and Kuno looked the most promising. A graffiti of lions welcomed you to the park until recently. It has now been replaced by the one depicting cheetahs. Image courtesy: Kuno National Park

In 2013, the sanctuary was finalised for the lion relocation project with strong objections from Gujarat, which said the cats were part of the state’s heritage.

The “Action plan for the reintroduction of the Asiatic lions (Panthera leo persica) in Kuno Wildlife Sanctuary – Draft 2016” said that carnivore populations restricted to single sites face a variety of extinction threats from genetic and stochastic environmental factors. The project was to be completed in 2020 but did not see the light of day.

The Lion Project launched by Prime Minister Narendra Modi on 15 August 2020 zeroed in on seven sites in Madhya Pradesh and Rajasthan for relocation. By 2021, Gujarat prepared a fresh plan to move the animals to the state’s Badra Wildlife Sanctuary and other areas. This does not include relocation to other states. 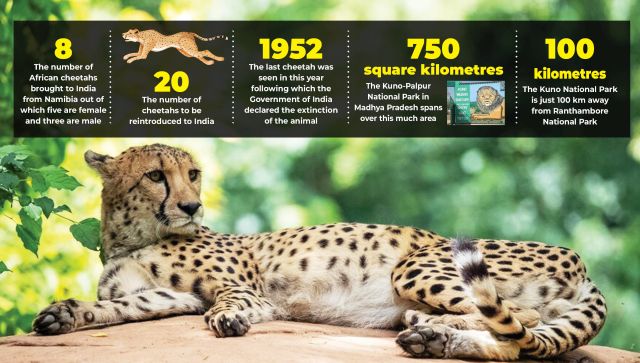 While eight cheetahs are coming from Namibia, another 12 will be reintroduced from South Africa. Graphic: Pranay Bhardwaj

The new home for cheetahs

With the plan to relocate the lions not progressing, Kuno National Park was picked as the new home for the African cheetahs to be brought in from Namibia. The sanctuary was already prepared for the lions, which made it an easy pick. Between 1996 and 2001, the Madhya Pradesh government relocated 23 villages containing 1,547 families from Kuno, which meant less chance of a man-animal conflict.

Kuno and the surrounding region were once a prime cheetah habitat and a principal site for their capture during the Mughal era, reports Nature in Focus. Now the reserve is all set to welcome eight cheetahs who have been first released in giant enclosures. There is abundant prey for the cheetahs in Kuno, from spotted deer to wild pig. Image courtesy: @Kunowls/Facebook

There is no dearth of water in Kuno and there is abundant prey. Chital, sambar, nilgai, chinkara, wild pig, chowsingha, and blackbuck roam the forest. Kuno also has ample natural habitat for the cheetah in the form of grasslands, savannah, and open woodland with evergreen riverine ravines, a technical committee that was entrusted to look into the relocation found, according to India Today.

Sheopur district, where Kuno is located, has rainfall levels, temperatures, altitude and conditions similar to that of South Africa and Namibia, Environment Minister Bhupender Yadav told The Indian Express. “The aim behind the translocation is not only to be able to re-introduce the cheetah in India – it was declared extinct in 1952 – thereby restoring India’s natural heritage, but also to develop a cheetah metapopulation that will help in the global conservation of the animal,” he said.

While there are no tigers in Kuno – the lone striped cat, who had wandered in from Ranthambore, chose to return home in November 2020 – some experts warn of threats from leopards.

However, sources in charge of the project said that most leopards that were inside the enclosure prepared for the cheetahs were lured into cages, trapped and moved elsewhere. There was reportedly one leopard cub which was to be removed before the arrival of their cousins. 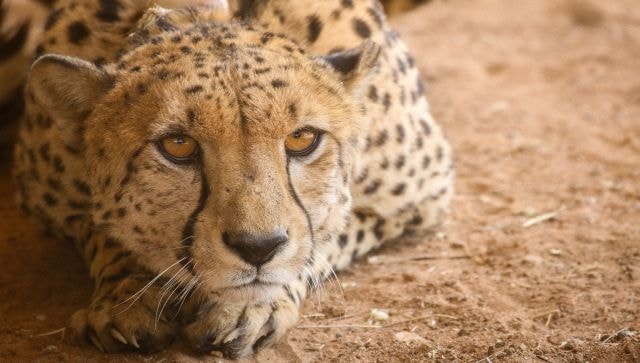 The radio-collared cheetahs will be kept in a large quarantine enclosure before they are moved to a bigger enclosure of 6 square kilometres until they adapt to the new environment. News18

The stage then is set to welcome the cheetahs from Namibia. They will soon be joined by more from South Africa. And the purr of the feline will reverberate in Kuno’s pristine wilderness.