New Delhi: The National Investigation Agency (NIA) custody of four Kashmiri separatists, including the son-in-law of Hurriyat leader Syed Ali Shah Geelani, was on Friday extended by 10 more days by a Delhi court in a terror funding case.

Special Judge OP Saini, however, sent three other separatist leaders to judicial custody for a month after the National Investigation Agency did not seek their custody. 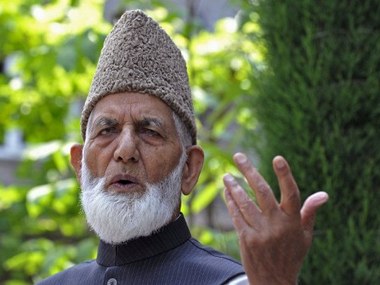 The agency had earlier sought their custody, saying they had to be taken to various places for the purpose of investigation.

Shah, the son-in-law of hardline separatist leader Geelani, was in the custody of the Jammu and Kashmir Police, who had put him under preventive detention immediately after the festival of Eid last month.

Geelani's close aides Tehreek-e-Hurriyat spokesman Ayaz Akbar and Peer Saifullah were arrested by the NIA from the Valley.

Shahid-ul-Islam is the spokesman of the moderate Hurriyat Conference led by Mirwaiz Umer Farooq.

Hafeez Saeed, the Pakistan-based chief of the Jamaat-ul Dawah, the front of the banned Lashker-e-Taiba (LeT), has been named in the FIR as an accused, besides organisations such as the Hurriyat Conference (factions led by Geelani and Mirwaiz Farooq), Hizbul Mujahideen (HM) and Dukhtaran-e-Milat.

The houses of those arrested had been earlier raided by NIA sleuths as a part of the agency's efforts at clamping down on separatist groups allegedly receiving funds for subversive activities in the Valley.

The NIA had claimed that it recovered account books, Rs two crore in cash and letterheads of banned terror groups, including of the LeT and the HM, during the raids.