Heavy rainfall was reported in Srinagar again. The water levels in Jhelum have begun rising because of the rains, according to CNN-IBN. It has been in Srinagar since last night.

Minister of State for Home Affairs Kiren Rijiju said that there should not be hue and cry about the Kashmir floods. "Hue & cry about situation in Jammu and Kashmir isn't necessary. The situation is in control. We are prepared to handle it," he said.

Meanwhile, the Indian Meteorological Department (IMD) Director Sonam Lotus said that tonight will be a crucial night for Kashmir. "Moderate or heavy rainfall might take place in Kashmir. Tonight is crucial," he said.

National Conference MLAs created a massive uproar in the Jammu and Kashmir Assembly over the floodlike situation, which took a violent turn as the NC members were marshaled out of the Assembly. The NC members were demanding an update on the situation in Kashmir, according to TV reports.

Uproar in J&K Assembly over flood like situation, NC members marshaled out of the assembly. pic.twitter.com/72WlDXJ8fp The Met has said that heavy rainfall is expected in the Valley from today till 3 April. ANI also reported that some rainfall took place in Srinagar last night.

"Some houses were washed off but there was no loss of lives," said Lt Gen Subrata Saha of the Indian army. He also said that three bridges had been washed off till now. "We have mobilized resources from north Kashmir...we are prepared to deal with any situation."

Meanwhile, the Jammu-Srinagar highway was re-opened on Tuesday, according to CNN-IBN.

Omar Abdullah appeals to tourists not to cancel visit

Former Jammu and Kashmir Chief Minister Omar Abdullah today appealed to tourists not to cancel their booking for visiting Kashmir in view of flood threats.

"Those of you with bookings to visit Kashmir please PLEASE don't rush to cancel. Instead I request you wait to see how things develop," Omar wrote on Twitter.

Those of you with bookings to visit Kashmir please PLEASE don't rush to cancel. In stead I request you wait to see how things develop 1/n

The Tourist industry had a disastrous Autumn & a really bad winter because of the floods. Finally things were looking up in April 2/n

So my earnest appeal to you is please keep the faith, don't rush to cancel. Wait to see how the next few days go & then decide. Thanks 4/4

Mukhtar Abbas Naqvi said he has given a report on the situation in Kashmir to Prime Minister Modi and also spoke to him on the issue. He added that the Centre has assured help to Jammu and Kashmir. 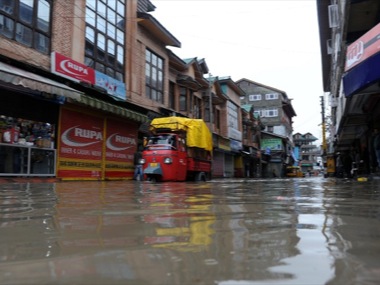 The Centre on Tuesday said the flood situation in Jammu and Kashmir so far is not as grave as last year but authorities are on alert to deal with any situation.

"Situation is not as grave as last time. But we are fully alert and if required we will send more assistance," Home Minister Rajnath Singh told PTI.

The Home Minister yesterday had a telephonic conversation with Jammu and Kashmir Chief Minister Mufti Mohammad Sayeed who gave him a detailed briefing about the flood situation in the state. 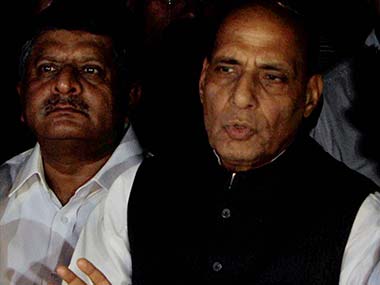 Death toll due to floods rises to 19

According to television reports, death toll has climbed up to 19 on Tuesday. According to Headlines Today, next 48 hours are critical for Jammu and Kashmir.

Met had predicted that heavy to very heavy rains in the Valley in the next six days.

NDTV reported that Jhelum is flowing below its danger mark as flood water in Jammu and Kashmir receded on Tuesday. According to latest reports, there was no rainfall in the last 28 hours and NDRF confirmed that the situation in Srinagar and adjoining areas is under control now.

The Jhelum river on Monday crossed the danger level in Srinagar and Sangam area of South Kashmir with heavy rains lashing most parts of the state which sounded an alert asking people to move to safer places.

A senior official said water level of river Jhelum at 6 am at Sangam (South Kashmir) and Ram Munshi Bagh (Srinagar city) has touched 22.4 feet and 18.8 feet respectively. Danger level at Sangam is 21 feet and at Ram Munshi Bagh it is 18 feet.

People living on the banks of the river Jhelum have been asked to remain alert and advised to move to safer places. Old persons and children have also been asked to shift to specially set up camps, a government spokesman has said. He said all the employees deployed for flood control have been asked to report for duty immediately.

If the water level breaches 23 feet mark, the state will have to undertake a massive rescue operations and evacuate people from areas adjoining the river.

Flash floods triggered by incessant rain have damaged scores of houses, school buildings and other structures besides snapping road connectivity in the Kashmir Valley, an official said on Sunday.

"Over 80 structures, including residential homes, school buildings and other structures, have suffered damage due to flash floods since Saturday," an administrative officer told IANS in Srinagar.

The Srinagar-Jammu National Highway was closed following landslides at a number of places on Sunday. The Srinagar-Gulmarg road was also closed after a bridge in Kunzar village was washed away by the swollen Ferozepur Nallah.
There was water-logging in many commercial and residential areas in Srinagar.

Chief Minister Mufti Muhammad Sayeed took stock of the flood threat and reviewed the preparedness of the administration that has already been put on high alert.

The University of Kashmir has postponed all examinations scheduled for Monday and Tuesday.

The Meteorological Department predicts heavy rainfall will continue for another six days, according to CNN-IBN. Around 300 people had died when flash floods had hit Jammu and Kashmir in 2014.

Meanwhile, 45 villagers are trapped in Poonch and the police and army personnel have been sent for rescue. "We are monitoring the sitaution," a government official said.

DG NDRF also told CNN-IBN that there is no need to panic as they were working with government officials and everything was under control.

JVMC hospital, a government hospital on the outskirts of Srinagar, was waterlogged. Patients were being evacuated from the hospital. No casualties have been reported due to the floods so far, according to NDTV. Flood relief camps have also been set up in Srinagar.