Bengaluru: Normal life was affected on Monday across Karnataka, including the IT capital here, with over one lakh employees of four state road transport corporations commencing an indefinite strike, seeking wage hike.

As the employees struck work since last midnight, office-goers waiting at bus stops was a common sight across the city, while thousands who had come down to Bengaluru from different parts of the state were seen stranded at Kempegowda bus stand, the city's main bus terminal.

Commuters had started facing trouble since Sunday evening with drivers and conductors not turning up for work. Similar reports have emerged from different parts of the state. Authorities in several districts have declared a holiday in schools and colleges. 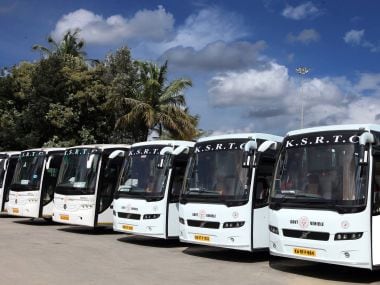 Over 1 lakh employees of the state transport have gone on strike. Photo courtesy: Facebook/KSRTC

More than one lakh employees of state transport corporations have gone on strike with about 41 demands, including a 35 percent wage hike, while state government has offered 10 percent increase.

Several rounds of reconciliatory meetings held between the management of state transport corporations and the unions, even at the level of Transport Minister Ramalinga Reddy, had failed with both sides sticking to their stand.

KSRTC Staff and Workers Federation General Secretary and All India Trade Union Congress leader H V Anantha Subbarao said, "The unions are ready for a meeting with Chief Minister. Let him call a meeting. We feel sorry that public are suffering, but our concerns should also be addressed."

Meanwhile, stone pelting on buses was reported from different parts of the state like Hassan, Bengaluru,
Ramanagara, Belagavi, Shivamogga, Koppal and Chikkamagaluru.

Transport officials said alternative arrangements are being made by giving temporary contract carriage to private  operators during the strike.