New Delhi: A delegation of BJP MPs on Thursday met Union Home Minister Rajnath Singh to demand a probe by the National Investigation Agency (NIA) into the killing of a Hindu activist in Karnataka and other such deaths in the state. 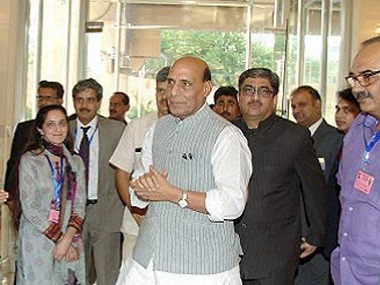 Lead by Bharatiya Janata Party (BJP) MP Shobha Karandlaje, the delegation requested the Home Minister to intervene in the matter and ensure a probe by the counter-terrorism agency into the murder of Deepak Rao, who is reportedly 21st person to be killed in Karnataka in the recent past.

According to police, Rao was hacked to death in the Dakshina Kannada district on Wednesday when he was returning after collecting some documents from his shop owner Abdul Majid. He was riding a motorbike on his way to work when four assailants came in a car, waylaid him and attacked with a sharp-edged weapon.

Karandlaje alleged involvement of radical Islamist outfit Popular Front of India (PFI) in most of the killings.

"This is the 21st murder in Karnataka. Of these, 12 were committed by 'jihadis'. The organisation is active in Karnataka because the state government is supporting it. It should be linked to national security and terrorism. The cases should be probed by the NIA," Karandlaje told reporters after the meeting.

She accused the Congress-led Siddaramaiah state government of trying to hush up the cases and not disclosing the forensic report of another slain activist, Paresh Mesta.

She also charged the state government with supporting the Islamist group for "vote bank politics".

"Siddaramaiah himself called the PFI and its political body, and asked them to support the Congress in the next elections," she claimed.

BJP MP Pralhad Joshi also demanded on Thursday in the Lok Sabha a probe into the murder of Rao by the NIA while raising the issue during the Zero Hour.

He accused the Congress government in Karnataka of turning a blind eye to the killings as it "wants to adopt the Kerala model" of governance where BJP members "are being targeted".

"I demand an NIA inquiry into all these cases," Joshi said.