Judgement error? Jayalalithaa's disproportionate assets may be 76% and not 8.12%

Even as her supporters are still celebrating her acquittal, her political opponents and critics have raised doubts that Justice CR Kumaraswamy might have made huge errors in calculations while delivering his judgement on Monday. The errors render the whole basis of the judgement meaningless. Here's an explanation of the mistake.

As per the table on Page 852 of the judgement, Jayalalithaa and her associates have taken loans worth Rs Rs 24.2 crore, which has been considered by the judge as lawful income. However, a simple addition of all the 10 heads in the table shows that the actual aggregate loan amount was only Rs 10.67 crore. This means there has been an error of about Rs 13.5 crore.

The correct calculation shows that the lawful income of Jayalalithaa would reduce by Rs 13.5 crore to just Rs 10.67 crore. The mistake has been pointed out by the DMK in a statement, according to media reports. 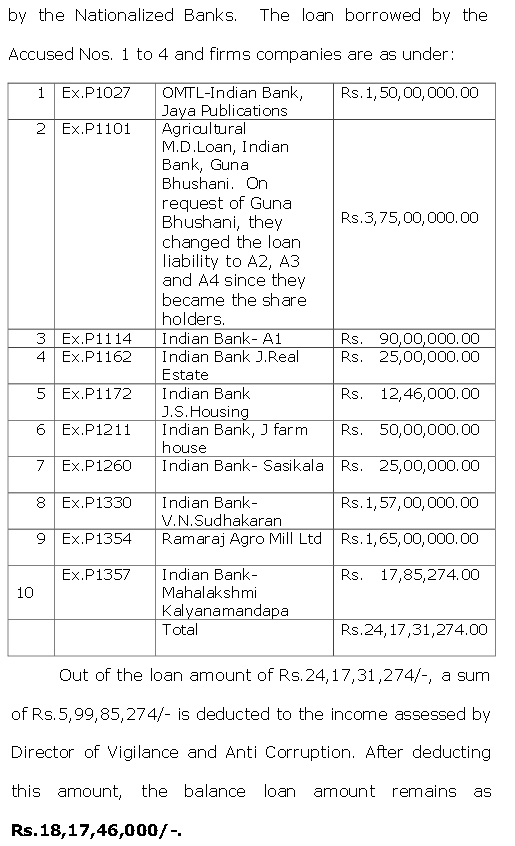 The table on page 852 of the judgement

Further, as per the judgement, about Rs 6 crore has been deducted from the loan amount as the income assessed by director of vigilance and anti-corruption, which reduces the loan amount to Rs 18.2 crore. According to a report in The News Minute, citing the DMK statement, the loan amount has to be Rs 4.67 crore. Here too the error is Rs 13.5 crore, the report says.

The error in the loan amount has a cascading impact as the figure had been used in many other calculations by the judge. On Page 913, in the statement of the income of the accused, the first head, loan as income, has been put at the said Rs 18.2 crore. Once this is replaced with Rs 4.67 crore, it again results in a mismatch of Rs 13.5 crore. The table on page 913 of the judgement

The same is the case with calculation of disproportionate assets, where total income is subtracted from the total assets.

As per the judgement, Jayalalitha's total assets stand at Rs 37 crore. Deducting the total income (Rs 34.77 crore) from this, the judge has arrived at a figure of Rs 2.82 crore. This figure shoots up to Rs 16 crore, once we replace the total income with the correct number of Rs 21.2 crore.

As per this calculation, the percentage of disproportionate assets is a whopping 76.5 percent of Jayalalithaa's income and not 8.12 percent as the judge has said in the judgement, The News Minute report said. The calculation of disproportionate assets as per the HC

It may also explains why BJP leader Subramanian Swamy termed the judgement a "tragedy of arithmetic errors".

In my Appeal to SC In JJ DA case. I will prove that the KHC judgment is a "tragedy of arithmetic errors". JJ will have to resign again if CM