Independence Day as it happened: PM Modi's strong message for Pakistan, but no words on Kashmir

A hawk-eye vigil is being kept across Delhi as Prime Minister Narendra Modi addresses the nation from 17th century Red Fort on the 70th Independence Day while tight security remained in force in violence-hit Kashmir Valley as a precautionary measure.

Prime Minister Narendra Modi's speech is being touted as the longest Independence Day speech in history. Modi broke his own record from last year, The Times of India reported, when he made a speech that in turn reportedly broke a record held by former Prime Minister Jawaharlal Nehru.

Prime Minister Narendra Modi's speech is being touted as the longest Independence Day speech in history. Modi broke his own record from last year, The Times of India reported, when he made a speech that in turn reportedly broke a record held by former Prime Minister Jawaharlal Nehru. 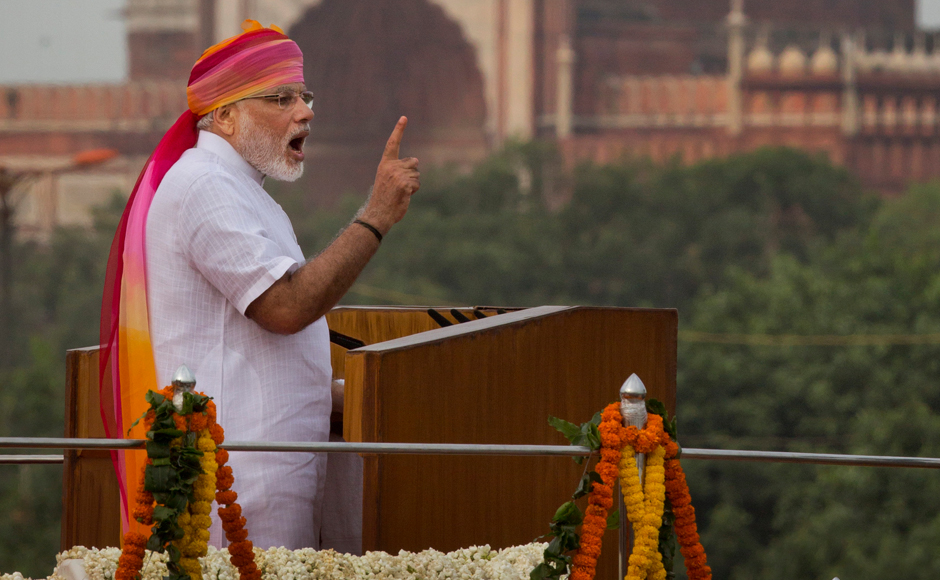 Prime Minister Narendra Modi at Red Fort on Monday after his speech. 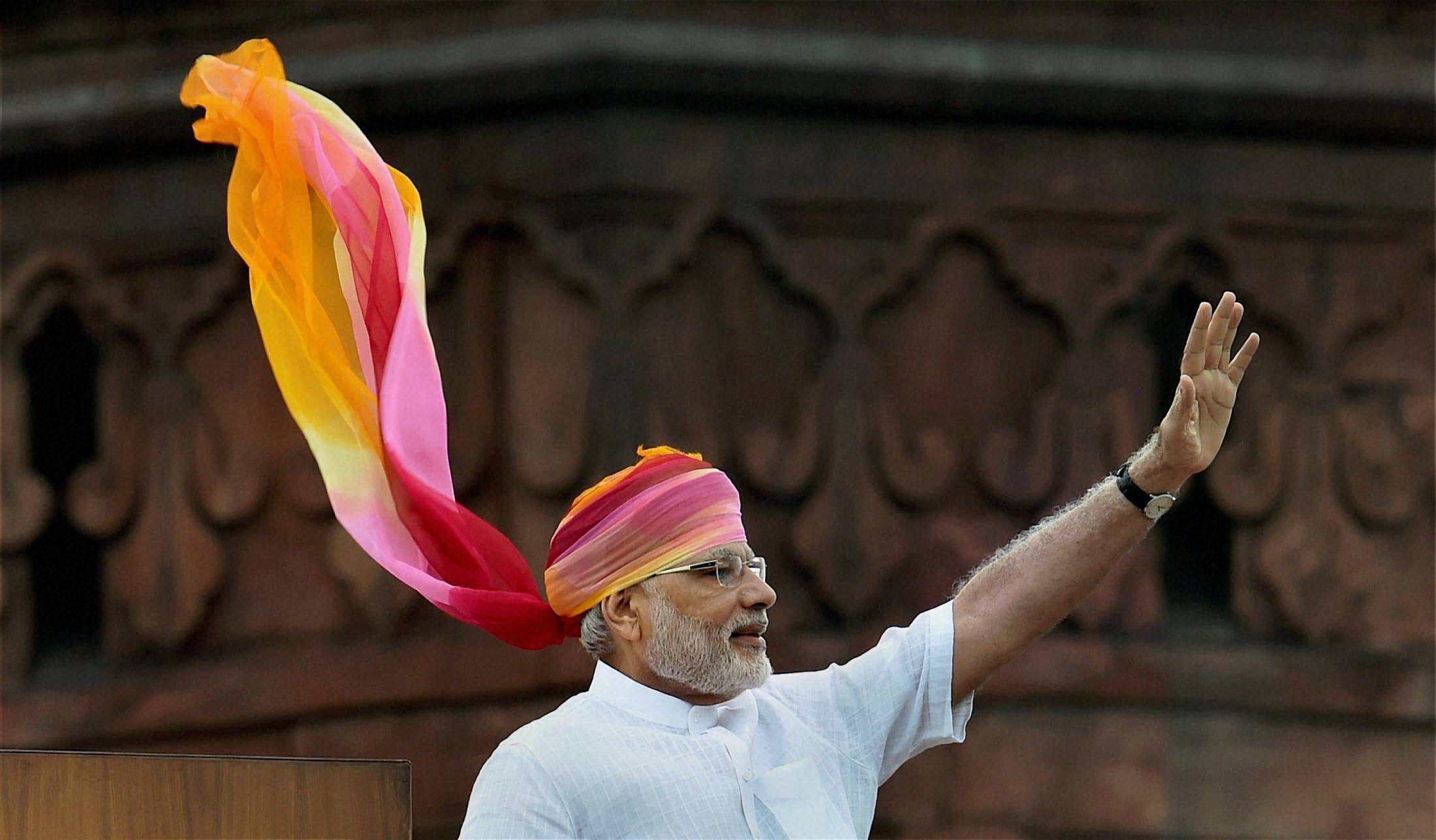 The Chief Minister said she too had a grievance at the way Kashmir issue has been handled over the years.

"I also have grievances. People of Jammu and Kashmir joined with such a big country, not considering the religion, and preferred a democracy. Why has our democracy remained confined to casting votes? The biggest part of democracy is dialogue. We have resolved so many issues but why have we failed to take forward the dialogue process here? Where have made a mistake? Why did it take till 2002 for the (fair) election system to reach Kashmir? Why did our system and leadership here and in Delhi in 1987 elections usurp the rights of those people (now separatists) who could have become MLAs, Ministers or Chief Minister? They wanted to take oath of Constitution of Jammu and Kashmir along with the Constitution of the country. There is no fault of people of Jammu and Kashmir in it," she said.

Mehbooba said the separatists were then looking for alternatives to National Conference and Congress but "it was not allowed to happen by the leaders here and there (Delhi)".

Guns will not solve any problem: Mehbooba

Speaking against the backdrop of over month-long unrest in the valley triggered by the killing of Hizbul Mujahideen commander Burhan Wani, she questioned people who have been indulging in violence as she underlined that any remedy could be found through dialogue in a great democracy like India.

Emphasising that any propaganda like attempts to erode the special status of Jammu and Kashmir is false, she urged the people to give her time so that she could work on the plans and programmes she had charted for peace and progress of the state.

"Gun will not solve the problm. Guns has not solved any issue," Mehbooba said, adding there is no way other than the dialogue to resolve problems and address grievances. People of Jammu and Kashmir are not bad, nor is India bad. Somewhere mistakes were made with regard to elections. The leadership of the country -- from Jawahar Lal Nehru till date -- and the parties, it is their mistake," she said.

Asserting that gun will not solve any problem, Jammu and Kashmir Chief Minister Mehbooba Mufti hoped Prime Minister Narendra Modi will complete the process started by Atal Bihari Vajpayee to address the state's problems which she attributed to the "mistakes" by successive central governments, starting from Jawaharlal Nehru.

In her maiden Independence Day address as Chief Minister, Mehbooba made an emotional appeal to the youth indulging in violence, telling them not to be misled by the "vested interests" who want to keep Kashmir burning, and prevent the beautiful valley from turning into another Syria or Afghanistan.

Rahul said the generation which earned us the hard earned freedom is no longer with us but the Constitution is their precious gift.

"It embodies the values, principles and ideals for which they fought, values they hoped would guide our brave young country. Now it is up to us."

Rahul's remarks come against the backdrop of attacks on Dalits as also on Muslims by cow vigilantes in the recent past.

When forces of darkness threaten this liberty for some of us, we must remember that freedom can never be for the few: Rahul Gandhi

Against the backdrop of recent attacks on Dalits, Congress Vice President Rahul Gandhi today said freedom can never be for the few and asked Indians to aspire for a country where ideas are not "crushed violently" by the forces of hate and mediocrity.

"When the forces of darkness threaten this liberty for some of us, as we saw in recent times, we must remember that freedom can never be for the few — it has to be for everyone. Every human being in India has the right to dignity and the freedom to live and express themselves freely," he said in a message on Independence Day.

Gandhi said Indians are honour-bound to aspire to a country where nobody lives in fear and "where ideas flow freely and are not crushed violently by the forces of hate and mediocrity. We must insist and fight for this truth, at all times."

Rahul hoisted the national flag at the party headquarters here for the first time since he took over as the Congress vice-president three years ago. 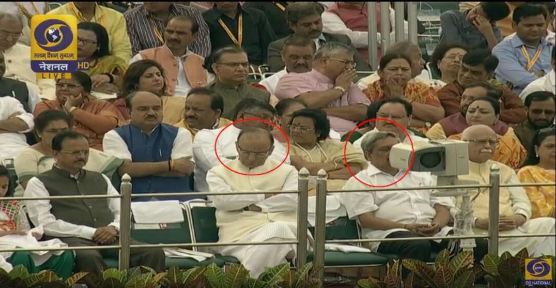 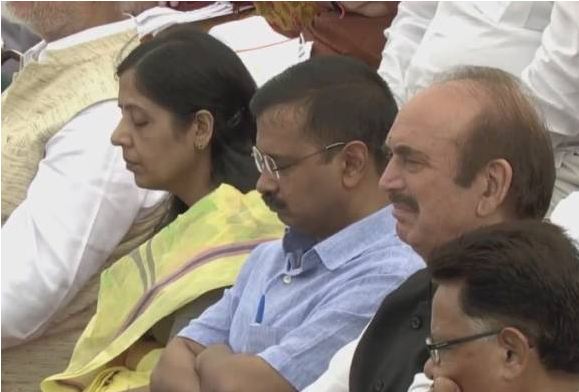 A hawk-eye vigil is being kept across Delhi as Prime Minister Narendra Modi addresses the nation from 17th century Red Fort on the 70th Independence Day while tight security remained in force in violence-hit Kashmir Valley as a precautionary measure.

Thousands of security personnel have been deployed in and around the historic Mughal fort which will see the presence of senior ministers, top bureaucrats and foreign dignitaries, besides a large audience to hear the Prime Minister.

A multi-layer security has also been thrown around Rajpath where a seven-day-long cultural festival 'Bharat Parv' is underway. The step has been taken as people have been flocking to the area to witness the illumination of North Block, South Block and other government buildings after sunset in the run up to August 15.

Strict security measures were in force in curfew-bound Srinagar ahead of the Independence Day celebrations with large contingents of paramilitary and police personnnel being deployed across the city.

Bakhshi Stadium — the main venue of the Independence Day function in Jammu and Kashmir — has been turned into a virtual fortress. "All the roads leading to Bakhshi Stadium have been sealed and heavy deployment of security forces carried out en route to ensure peaceful celebrations tomorrow," a police official said. Preparations on for Independence Day celebrations in Ahmedabad. PTI

He said there were no inputs about the possibility of militant attacks to disrupt the celebrations but the security grid is not taking any chances. "The usual security drill is being followed but some extra measures have been put in place to ensure no mob violence takes place around the venues in Srinagar or elsewhere in the Valley," the official said.

Due to the ongoing unrest -- that began on July 9 following killing of Hizbul Mujahideen commander Burhan Wani, mobile telephony and internet services have already been snapped in the Valley.

In the past, the mobile phone and mobile internet services used to be disabled for few hours during Independence Day and Republic Day celebrations as a precautionary measure to prevent militants from using these devices to trigger explosions.

Curfew was extended to several places in Kashmir in view of the separatists' call for a march to the heart of Srinagar even as restrictions on the movement of people remained in rest of the Valley.

Despite curfew, separatists elements managed to hoist Pakistan flags in many localities across Kashmir to mark the Independence Day of the neighbouring country, the official said, adding security forces pulled down the flags as soon as they were noticed.

56 people, including two policemen, have been killed and several thousand others have been injured in the clashes in the Valley that began on July 9.

In Delhi, Home Minister Rajnath Singh reviewed the security situation in the country, particularly in J-K, on the eve of Independence Day.

The top brass of the security establishment briefed him on the prevailing situation in the country and the steps taken to foil any attempt by terrorists and other elements to disturb peace, official sources said.

Army and NSG officials have set up a special communication and command centre to keep a close watch on the proceedings at Red Fort.

Special measures are being taken to meet "on-the-spot situations" such as the Prime Minister choosing to meet people at the venue as he has done earlier, officials said.

CCTV cameras have been installed along the route to be taken by the PM's cavalcade from 7 RCR to Red Fort, besides 200 CCTVs and two high-mast, high-resolution cameras at the fort premises.

Security has also been beefed up and police patrolling intensified in North East, Punjab, especially the border districts, Haryana and other parts of the country in the view of the celebrations with bomb disposal squads being deployed at the main function venues.