In Odisha, mob sets truck on fire suspecting it was transporting beef

Berhampur: A mob on Sunday set ablaze a truck after it overturned on the national highway in Berhampur, alleging that it was carrying beef, police said.

The driver and the cleaner of the truck fled from the spot when the mob attack took place near Golanthara, the a police official said. 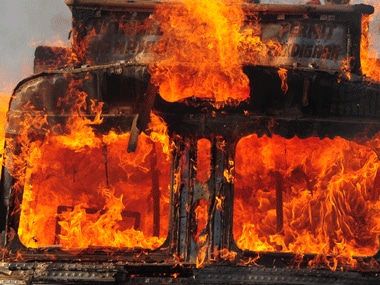 The truck was on its way from Bihar to Mumbai when it overturned after losing balance, the official said.

After it overturned, a packet fell off from it, which the locals alleged contained beef, the police official said.

"We will examine the contents of the packets to ascertain wheather it was beef or not," said sub divisional police officer, Berhampur Sadar, Ashok Kumar Mohanty.

Meanwhile, tension gripped the area and people blocked the national highway, demanding immediate arrest of the driver and the cleaner.

Senior police officers rushed to the spot to control the situation. They also seized some packets from the truck.

"The National Highway has been cleared," Mohanty said.