For once, the exhortation was to overcome a virus — and not a tirade against a community, which has been the ethos of the Shiv Sena. In fact, Maharashtra chief minister Uddhav Thackeray explicitly stated that he would not tolerate communalisation of the ongoing coronavirus outbreak, or even fake news that incited people. In one of his frequent video addresses, he called for wearing homemade masks while going out, much as soldiers wear bullet proof vests in battle; he invoked the pride and patience of Maharashtrians to win the battle against the deadly pandemic. As senior journalist Sujata Anandan notes, Uddhav Thackeray has got his messaging right.

To administer a state weighed down by a gross lack of health infrastructure since long, in an unprecedented crisis, is not easy. It is often said of Mumbai: “Maximum City, Minimum Governance”. With Mumbai at the epicenter of the outbreak, mounting cases, and the city as well as the state of Maharashtra in lockdown, many are wondering where their next meal will come from.

As chief minister of the worst-hit state in the country, Uddhav Thackeray has inherited a set- up that is far from ideal. Over the years, he has been described in many ways — a gifted photographer, reluctant politician, reticent man, and an introvert to boot. He may be all of these things. But in the midst of this crisis, he is also — at the very least — making the right noises. His stance against the communalising of the Tablighi Jamaat incident in New Delhi was firm; he appealed to migrants not to leave the state. Whether or not this will be enough to mitigate the situation remains to be seen.

Even if Mumbai is India’s commercial capital and Maharashtra among its frontline states, services and infrastructure are not always up to the mark. During the swine flu crisis some years ago, Mumbai hospitals struggled to cope with patients and the state administration was rather lax in testing, identifying and isolating patients, and even providing medicines.

This time, the world is dealing with a deadly virus that has caused global lockdowns and staggering fatalities. In Maharashtra, the first COVID-19 case was reported on 9 March in Pune; the first coronavirus-related death was reported in Mumbai on 13 March. That was the day the state government notified the coronavirus outbreak under the Epidemic Diseases Act, under which you can forcibly hospitalise affected individuals. Movie halls, gyms and other public places were shut; public gatherings and events were banned. On 20 March, the suburban trains were stopped as was other transport, and the state withdrew reluctantly into a grim, curfew-like situation. 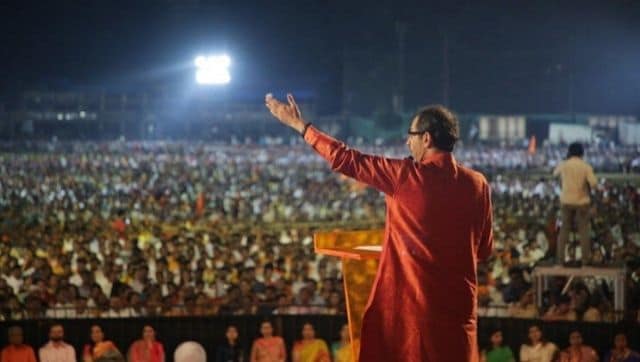 As chief minister of the worst-hit state in the country, Uddhav Thackeray has inherited a set- up that is far from ideal. File Photo

The city’s slums are now being eyed askance, not the global travelers who flew in with the virus and were not tested. Shakeel Ahmed, a lawyer and activist working in the Wadala slums in Central Mumbai, said the government should be reaching out to people. Instead, it is individuals and NGOs who are stepping out and providing food and supplies. Those who do not have ration cards are being turned away from ration shops, and this needs to be addressed on a priority basis. Ahmed says government officials should be on the streets, administering the state, instead of working from home. At least some sort of primary screening should be conducted in all homes with doctors and teams to isolate those with symptoms, especially in slum areas, Ahmed suggested.

What about elected representatives? Some of them are out in their areas doling out food and masks, but not all. Faced with an unknown and alarming enemy, the sagging health infrastructure is fighting it as best as it can. Private hospitals are shut, some of them due to the outbreak, and individuals with other illnesses are facing difficulties in accessing care. Doctors in public hospitals are coping as best as they can in the absence of protective equipment. Social media is full of news: resident doctors in government hospitals in Aurangabad protesting to demand personal protective equipment; a viral video from Poddar hospital in Mumbai in which a nurse explains how no one was willing to enter a ward where a COVID-19 patient had died. Environment minister Aaditya Thackeray tweeted that action has been taken against some doctors.

Public hospitals are not fully geared to treat coronavirus patients. This is perhaps where the Maharashtra government needs to step in and take bold decisions. While calling for a clampdown on fake news and ensuring a supply of essential commodities in the state are necessary actions, much more needs to be done as India has not yet reached the peak of the crisis.

Meanwhile, the existence of the virus in the community even before the first case was detected, cannot be ruled out. In some cases, patient zero has not been traced. There are more than enough good Samaritans — and Mumbai has never fallen short of them — including celebrities like Shah Rukh Khan, who are helping with food, donations, shelter. There is promising news coming in, of patients recovering at the Kasturba Hospital, of an increase in testing and isolation numbers in the state. There are over 3,000 camps for migrants (the chief minister’s figures), although some of them need to be run better. (For example, in Bhiwandi, a journalist pointed out that six lakh migrants are desperately in need of attention.) Earlier this year, the government had launched its Shiv Bhojan Scheme, which provided a full meal to the meal to the poor for just Rs 10.

But in a grave situation like this, the state has to go the extra mile in ensuring the most vulnerable get access to basic facilities.

Somehow all this is not about Uddhav Thackeray and yet it is about him.

One needs to go beyond the rhetoric and video addresses and study the ground realities. Reaching out to people and reassuring them in a language they can relate to is important, and it is a trait that Uddhav seems to have inherited from his father. As surprising as this may sound to his detractors, Uddhav does have certain political qualities and he should put these to good use. Moving beyond announcements, this is a time when he can make a real difference by addressing the needs of the vulnerable, and by putting in place a robust emergency plan which works for all times — not just from one crisis to the next.

Mumbai and Maharashtra are unique in many aspects. Mumbai has a vast slum population which has shoddy health care, and the city is increasingly divesting this sector to private sources. One has to always fall back on public hospitals, which are themselves overstrained. While Kerala is earning accolades for its handling of the situation, the state has put tremendous energy and effort in creating a decentralised public health care and food distribution system. That has come significantly in handy each time there is a crisis. Maharashtra, under Uddhav, needs to get organised on that front, as do many other Indian states.

This is a time to foreground health care as a public service, to create infrastructure that is state-of-the-art, to give our medical personnel the attention and respect they deserve for being on the frontline of any emergency. For too long we have suffered from ad hoc decisions and makeshift arrangements. Let the Maharashtra government learn instructive lessons and hold on to this experience of the war against the coronavirus.

That will be the real test of Uddhav Thackeray’s statesmanship — and his true legacy to the state.