An "enigmatic woman", a "shy actor", the "astute politician", the "iron lady", a "beloved leader": The late AIADMK chief J Jayalalithaa has earned many such monikers through her work as six-time Tamil Nadu chief minister. She was a fighter, so much so that she managed to hold together a disillusioned and broken party in the post-MG Ramachandran era, single-handedly around her cult. However, it was her efforts following the tsunami that shook Tamil Nadu on 26 December, 2004, that best highlighted her administrative skills. 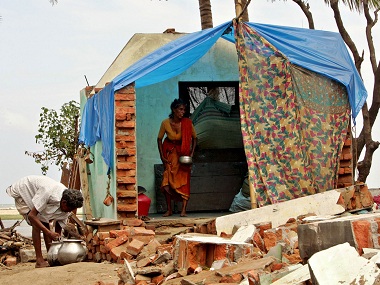 Jayalalitha announced that 14,364 houses would be built in 444 villages along coastal Tamil Nadu. Reuters

The tsunami left over 9000 people dead and many more homeless in India, Sri Lanka and South-East Asia. On the day of the tsunami, the death toll was 131 in Chennai; Nagapattinam was worst-hit with 788 deaths, and in Kanyakumari, around 392 people died, according to a report by The Hindu. The earthquake off the coast of Sumatra that caused the tsunami was recorded at a magnitude of 8.9 by the United States Geological Survey. It caused buildings in lands as far away as Thailand, Bangladesh and Singapore to sway.

Another report by the Hindustan Times claims that the tsunami took the lives of 12,405 in all, many of whom were children.

Jayalalithaa announced a Rs 153.37 crore relief package, divided into a general package and a separate one for fishermen. Families would get Rs 1 lakh as compensation for every member lost, along with one dhoti, one sari, two bedsheets, 60 kg of rice, three litres of kerosene, and Rs 1,000 in cash for groceries. Furthermore, Rs 1,000 was to be given for purchase of utensils, Rs 2,000 so they could put up accommodation. Per family, and there were about one lakh families in all, the package would cost about Rs 5,000. The fishermen also recieved an extra Rs 65 crore meant to cover gill nets and boats, according to another report by The Hindu.

Once the state tsunami relief fund of Rs 1,000 crore was exhausted, she wrote to then Prime Minister Manmohan Singh asking for a donation of Rs 1,120 from the National Contingency Fund, according to The Telegraph.

It was only a matter of hours before Nagapattinam had its power supply back. With the state working on disaster management for over seven years, response time had been reduced significantly; mobile cranes and ambulances were on patrol. The government entrusted district administration with rehabilitation of affected families, and when they were found to be incompetent, she reshuffled or sacked officers immediately, according to a report on Rediff.

A report by NDTV says that Jayalalithaa drew up the Emergency Tsunami Rehabilitation Scheme in 2005, according to which 14,364 houses would be built for 444 villages along coastal Tamil Nadu, the ones most severely affected by the tsunami.

She called on Manmohan Singh again, urging the prime minister to house the tsunami warning centre in Chennai in the National Institute of Ocean Technology (NIOT), as it would be psychologically reassuring to the coastal population. She cited the 50 seismic disturbances that had taken place in TN, including seven severe and very severe cyclonic storms in 50 years leading up to 2005, according to The Hindu.

Jayalalithaa even extended help to the Sri Lankan government by instating officers to guide the island nation in the process of rehabilitation, according to Deccan Chronicle quoting state revenue minister RB Udhayakumar. After China and Pakistan denied help to Sri Lanka, Colombo looked to Jayalalithaa for assistance. And she responded.

Her administrative style was uncompromising, whether it was banning the sale of gutkha, or mandatory installation of rainwater harvesting systems, but, she got things done on time without any ifs or buts, as was seen with the tsunami relief, ensuring people remembered not the ruthlessness of her tenure, but the help it gave them.