A cheetah lies inside a transport cage at the Cheetah Conservation Fund (CCF) in Otjiwarongo, Namibia before being transported to India. The CCF travelled to India to deliver eight wild cheetahs to the Kuno National Park. AP

It is a big day for wildlife conservation in India, ad cheetahs make a comeback. Prime Minister Narendra Modi’s ambitious plan to reintroduce the world’s fastest cat has seen the light of day on his birthday. Seventy years after extinction in India, eight cheetahs have been flown into India from Africa’s Namibia. They will be then taken to Madhya Pradesh’s Kuno-Palpur National Park.

We take a look at the grand plan to translocate the spotted felines.

How were the cheetahs were brought to India?

The African cats – five females and three males – were brought to India on a tiger-faced chartered cargo flight, which take off from Windhoek, the capital of Namibia on Friday. After an overnight journey, the cheetahs landed at Gwalior's Maharajpura airbase on Saturday morning. The flight was scheduled to land at 6.30 am but was delayed and landed just before 8 am. After the immigration process and other formalities, cheetahs are flown in an Indian Air Force Chinook heavy-lift helicopter to Kuno National Park.

On the flight, the radio-collared animals were kept in cages measuring 114 cm X 118 cm X 84 cm. They were not tranquilised but well-fed for two to three days before the journey, reports The Indian Express.

"The cats are under very mild sedation, but they are not tranquilised. They are all looking great," said Dr Laurie Marker, world's leading expert on cheetahs, who was on the jet with the big cats told NDTV.

There were reportedly three veterinarians from India, Namibia and South Africa on the flight transporting the animals.

#WATCH | First look of Cheetahs that will be brought from Namibia to India on 17th September at KUNO National Park, in Madhya Pradesh pic.twitter.com/HOjexYWtE6

Also read: From extinction to reintroduction: A brief history of India’s tryst with the cheetah

What happened after the animals landed in Gwalior?

After the formalities are the airbase were complete, the cheetahs were transported to the Kuno-Palpur National Park by helicopter. This ride takes another 40 minutes. A temporary helipad has been constructed at the park.

Where will the cheetahs be kept in Kuno?

At Kuno, the cheetahs will be released by Prime Minister Narendra Modi. For a month, they will be kept in large quarantine enclosures. This will help keep a check on them if they are carrying any disease and help them adapt to the new environment.

The enclosures are 50×30 metres in dimension and there are six such enclosures for the eight big cats. 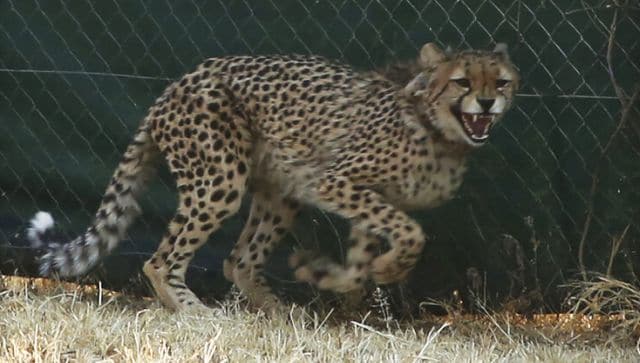 A cheetah which is translocated to India at the Cheetah Conservation Fund (CCF) in Otjiwarongo, Namibia on Friday. AP

According to the protocols, the cheetahs need to be quarantined for a month before and after shifting from one continent to another, he added.

Once the quarantine is over, they will be released into a bigger enclosure of five square kilometres until they adapt to the new environment.

How long will the cats be in the enclosures?

According to a report in The Indian Express, the animals will be able to hunt in the bigger enclosures. “In this bigger enclosure, where they will have prey and be able to hunt, we will closely monitor not only their health but also how they are adapting to Kuno, hunting, feeding, excreta etc. Once this is found to be satisfactory, they will be released into the 740 sq km Kuno National Park,’’ SP Yadav, member secretary, National Tiger Conservation Authority told the newspaper. The cheetahs will be released in enclosures, where they will be quarantined and monitored. Image courtesy: @moefcc/Twiter

So far, 24 of the 25 villages with a population of about 5,000 have been resettled to make way for the cheetahs. Also, feral dogs in the region have been vaccinated to ensure that they do not spread any disease in the spotted animals, the NTCA chief said, adding that locals in the regions have been sensitised about the new guests.

According to Yadav, Kuno has enough prey base to host the cheetahs. “It has a lot of positive factors such as good quality and diversity of habitats, grasslands, bamboo, wet patches. And then there are perennial massive tributaries to the Chambal river and diverse species of prey for the survival of the Cheetahs,” he told Daily Pioneer.

Will more cheetahs be coming to India?

Yes. The government plans to reintroduce 50 cheetahs in India over the next five years. This year, India will get 20. While eight will come from Namibia on Saturday, 12 others will be translocated from South Africa.

The cheetahs from South Africa are all ready to be moved to India. They are vaccinated, radio-collared and an extensive health check-up has been conducted.

India’s last cheetah died 75 years earlier in 1947 and the species was declared extinct in the country. The Indian government has been attempting to bring back the cheetah since the 1960s. Earlier, the aim was to reintroduce the Asian cheetah which is surviving in Iran. However, Tehran declined because the population of the endangered animal was critically low.

The plans to bring the African cheetah to India gained momentum in September 2009 when Jairam Ramesh was the environment minister. Officials informed that the “African Cheetah Introduction Project in India” was conceived back then.

Now 13 years later, India has received its first batch of cheetahs. It remains to be seen how well they adapt to the country.