New Delhi: Activist Yogendra Yadav was today sacked from the UGC for being a member of Arvind Kejriwal-led Aam Aadmi Party as the government said his association with the apex body of higher education may give a scope for its "future politicisation".

He was served a show cause notice on September 4 by the HRD Ministry citing conflict of interest "as his antecedents and credentials at the time of his appointment in 2011 and now stand substantially altered". 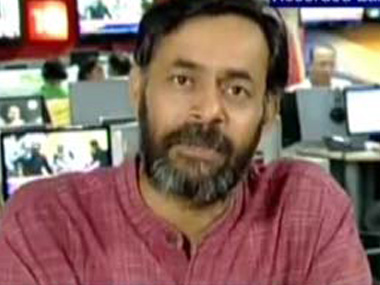 In its order, the Ministry said, "The central government in pursuance of powers vested under Rule 6 of UGC (Disqualification, Retirement and Conditions of Service of the Members) Rules 1992 hereby retires Yogendra Yadav from the post of member UGC with immediate effect."

Yadav, an officer bearer of AAP and his association with UGC as a member, having created a conflict of interest, may not only set a dangerous precedent, "it may even scope for future politicisation of UGC and its academic decision making", the order said.

Slamming the Centre, Yadav in his reply on September 10 had wondered whether the Ministry would have acted with similar "zeal" had he joined Congress.

Stating that he was not alone in holding the UGC post while being in a political outfit, Yadav referred to the Nehurvian days when Acharya Narendra Deva, a renowned scholar of Buddhism and the national president of Socialist Party, a leading opposition party of the day, was appointed the Vice Chancellor of two universities consecutively.