Food prices in India are likely to rise soon, warn experts, as farmers in the country face the double whammy of erratic rainfall and a nationwide lockdown due to the novel coronavirus.

The Skymet Weather, a private weather forecasting agency, in a report published on Monday, expressed fear of loss of crops due to the recent untimely rainfall when the agriculture sector in India is already struggling to meet the challenges thrown by the nationwide lockdown. 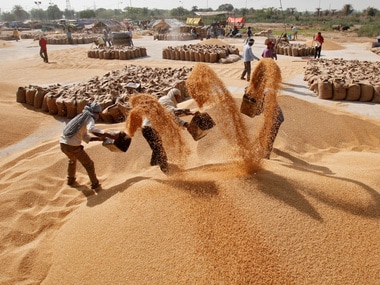 The report said, "The month of March has been rather harsh for many crops across several
parts of the country. Widespread rains lashed several parts of Punjab, Haryana, Rajasthan,
Uttar Pradesh, Bihar, Madhya Pradesh, and Maharashtra. Even Gujarat experienced
unseasonal rain, but it was mercifully light to moderate only. This untimely and unrelenting
weather activity has triggered fear amongst farmers about damage to standing crops. Rains are
not good at this stage and will certainly affect the yield of the crops."

A source in the private weather forecaster told Firstpost that n the month of March alone, this year, there has been excessive rainfall by 57 percent along with hailstorm, which could damage crops.

The source also informed that heavy rainfall along with hailstorm during the harvesting season
makes standing crops fall, thus decreasing the yield substantially.

Rekha Mishra, an expert with Skymet said that heavy rainfall not only decreases the quantity of
produce negatively but also quality.

“Due to heavy rains fields would be filled with water and the falling of crops could also result in damage of food grains,” she said.

The harvest season of Rabi crops starts from the month of February and continues till the month of May. The unseasonal rains are likely to impact Rabi crops like wheat, potato, tomato, and onions.

Brijkishore Yadav, a farmer in the Badaun district of Uttar Pradesh told Firstpost that his district has seen a massive loss of crops due to unseasonal rains.

“On average, 50 percent of the wheat produced in the district has been damaged due to the rains,
which was accompanied with hails in many places,” he said.

He further added that the gravity of the situation would become clear only after the wholesale
markets open up after the 21-day lockdown announced by Prime Minister Narendra Modi on 24 March is over.

"It is unlikely that adequate crops would reach the wholesale markets to meet the demand," he
warned.

The unseasonal rains have only added to the woes of the farmers, who are already suffering
due to the nationwide lockdown over coronavirus.

The agriculture sector has already been facing a shortage of manpower to harvest crops due to mass-scale migration of labourers from states like Haryana, Punjab, Gujarat and Delhi NCR to their home districts in Uttar Pradesh, Bihar, and Rajasthan, following the lockdown.

Venkatesh Athreya, a leading economist associated with the MS Swaminathan Research Institute told Firstpost a number of states are dependent on migrant labourers for agricultural works.

“States like Punjab, Haryana and a part of Uttar Pradesh are heavily dependent on migrant labourers for the agriculture sector. On the other hand, many states engage these labourers for loading and unloading, which also has a bearing in the agricultural sector," he said.

Ranveer Singh Munder, a farmer at Shamli district in Uttar Pradesh, however, says that restrictions on mobility have also resulted in the unavailability of labourers.

“On account of the lockdown many labourers living in Uttar Pradesh are not being able to move to the farmlands in Haryana, as a result of which, the harvesting of the crop has suffered,” he said.

Apart from a scarcity of labourers, there is also a scarcity of buyers of the agricultural produce as the wholesale markets are closed due to the lockdown.

“Many farmers are not finding buyers for their produce which they have already harvested as
some of the wholesale markets are closed as well,” said Yadav.

Rajesh N Garh, a wholesale trader in the Najafgarh wholesale market in Delhi, who deals in foodgrains told Firstpost that due to the lockdown, the operating time of the market has been reduced to four hours per day.

“As per the instructions of the market committee, we open our shops at 8 am and shut it down within four hours. Whatever sale or purchase is done is done during this period and not beyond that,” he said.

Several farmers fear that a major chunk of their produce may get damaged by the time they would find buyers.

There's also the fear that the closure of the wholesale markets coupled with a substantial decrease in agricultural production may lead to a rise in price levels of food.

Yadav, who also leads a farmer’s organisation in Uttar Pradesh, says that the only solution out of this mess is a dialogue between the government and the farmers about how to ensure mobility and facilitate the sale of agricultural produce during the lockdown.