The Delhi government has initiated a 15-point ‘winter action plan’ to combat air pollution in the city. PTI File photo

With air pollution choking Delhi every winter, the Arvind Kejriwal-led government has launched a new action plan to tackle the problem.

Under the 15-point ‘winter action plan’, a Green War Room has been set up to monitor air pollution 24X7. Launched by Delhi environment minister Gopal Rai today (3 October), the war room will ensure the effective implementation of the action plan.

It will comprise a 12-member team of environmental scientists, ‘green fellows’ and trainee engineers, as per News18.

“We have launched an advanced Green War Room from today and it will work round the clock. It will monitor air pollution levels 24X7 and ensure that all necessary measures are taken to curb the pollution in accordance with the amended GRAP (Graded Response Action Plan). The war room will also analyse pollution data of the city,” Rai was quoted as saying by PTI. 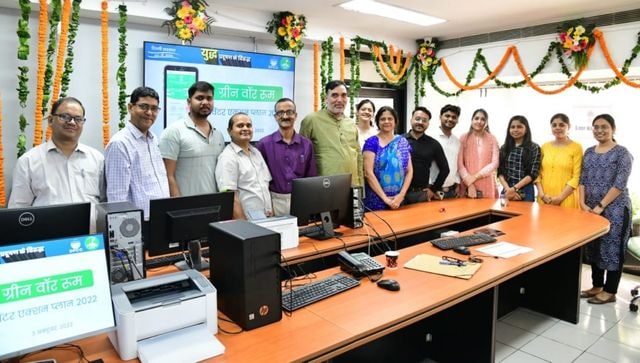 The Delhi government has set up a Green War Room to monitor air pollution 24X7. News18

The environment minister said the war room will also be linked with Green Delhi App.

The development comes in the wake of the 15-point winter action plan announced by Delhi chief minister Kejriwal on Friday.

Besides the war room, what are the other steps of the ‘action plan’ that will come into effect to combat air pollution? Why does Delhi choke up every winter? Let’s have a closer look.

The Kejriwal government will kick-off an anti-dust campaign on 6 October under which surprise assessments will be conducted at construction sites to curb dust pollution.

As many as 586 teams have been established to keep an eye on construction sites.

“If these measures are not followed by companies at construction sites, then strict action will be taken against them under the anti-dust campaign,” Rai was quoted as saying by PTI.

The bio-decomposer developed by the PUSA institute will be distributed to the farmers without any cost, reports India Today.

The bio-decomposer, which is in liquid form, is sprayed on the stem of the crop after the harvest; the stem decomposes and thus reducing the requirement for stubble burning.

PUSA bio-decomposer will be used on 5,000 acres of farmland this year to check stubble burning.

“We have been using this method for the past two to three years and it has shown great results. We sprayed bio-decomposer over 4,000 acres of agricultural land in the previous year. This year, we will spray it over 5,000 acres of land,” Kejriwal was quoted as saying by India Today.

From 25 October, vehicle owners will have to produce valid pollution under control (PUC) certificates for buying fuel at petrol pumps in Delhi, as per PTI.

As per the Delhi Transport Department, over 17 lakh vehicles, including 13 lakh two-wheelers and three lakh cars, were plying on the roads without valid PUC certificates till July 2022.

To control vehicular emissions, alternative routes will be suggested for more than 200 roads with heavy traffic for decongestion, as per PTI.

The Kejriwal government has prohibited the online sale and delivery of firecrackers in Delhi till 1 January next year. There is already a ban on the production, storage, distribution and purchase of firecrackers.

Over 200 teams will oversee the implementation of the ban.

The revised Graded Response Action Plan, a set of anti-air pollution measures, will be implemented in a stringent manner.

Under the modified GRAP, restrictions can be enforced on activities causing pollution for up to three days in advance based on forecasts.

Earlier, the curbs were imposed only after the concentration of PM2.5 and PM10 reached a certain limit. However, the measures will come into effect this year on the basis of Air Quality Index (AQI) values.

As per the new GRAP, the four stages of adverse air quality in Delhi have been classified as:

Stage III classification is for ‘severe’ air when AQI is from 401-450.

Stage IV is when AQI is above 450, the air will be labelled as ‘severe plus’, reports Outlook.

Ban on waste burning in open

The government in Delhi has banned the burning of garbage in the open, reports India Today.

As many as 611 teams will fine those involved in the open-burning of garbage in the city.

The Delhi government has identified 13 hotspots that are being monitored. Strict pollution control measures will be implemented in these areas.

The Green Delhi App was launched two years ago for people to report their problems concerning pollution.

Environment minister Rai apprised the government has received 54,156 complaints from various parts of the national capital via the Green Delhi App till now. He added that nearly 90 per cent of these issues have been resolved.

The maximum complaints were related to the Municipal Corporation of Delhi (32,573), followed by Public Works Department (9,118) and Delhi Development Authority (3,333), the minister said.

The Delhi government is planting trees to increase the green cover.

Arvind Kejriwal said on Friday his government had set a target of 42 lakh saplings in the national capital. The revised GRAP will be implemented in Delhi to check air pollution in winter. PTI File photo

A real-time source apportionment study was carried out in collaboration with IIT Kanpur to find out the level of pollution and its source at any specific point in time.

“Samples of air can be taken to identify the source of pollution, if it is from vehicles, stubble burning, or industry. We have established a super site on Rouse Avenue for this purpose and deployed several mobile vans equipped with various instruments. We are expecting to receive the data from 20 October. There will not only be source apportionment but source forecasting as well,” PTI quoted Kejriwal as saying.

An e-waste park will be set up to handle the pollution-causing electronic waste.

“The size of the park is 20 acres and it will be located in Holambi Kalan. Once inaugurated, we will collect all the e-waste of Delhi to be taken to this park and processed scientifically,” Kejriwal said.

People can become ‘paryavaran mitra’ or volunteers who will spread awareness about environmental protection in Delhi. As per the Delhi chief minister, more than 3,500 volunteers have already registered.

The Delhi government has called for coordinated efforts with the neighbouring states and the central government to check air pollution in the national capital.

“I request all the neighbouring states to ensure that all those vehicles which enter Delhi are either CNG or electric vehicles. They can also stop industrial units from using fuel, which causes pollution, and direct them to use PNG,” Kejriwal said.

Stubble burning from neigbouring states and use of biomass for household heating and cooking are the two major causes of the surge in air pollution in Delhi during the winter season, as per the study conducted by Council on Energy, Environment and Water (CEEW).

Transport (12 per cent), dust (seven per cent), and domestic biomass burning (six per cent) are the prime sources of locally-generated pollution in Delhi during winter (15 October-15 January), PTI cited the study.

“64 per cent of Delhi’s winter pollution load comes from outside its boundaries. Biomass burning of agricultural waste during the stubble burning phase and burning for heating and cooking needs during peak winter are estimated to be the major sources of air pollution from outside the city, according to UrbanEmissions.Info,” says the CEEW research.

An expert said that respiratory issues also witness a rise in the national capital during winter.

“Emergency hospital admissions linked with respiratory and cardiac stress and symptoms increase during winter months every year. Due to long-term exposure to air pollution, the health of the vulnerable is already compromised,” Anumita Roy Chowdhury, director at the Center for Science and Environment (CSE), told Deutsche Welle (DW).