Punjab Chief Minister Bhagwant Mann made a big announcement on Monday — his government is looking into the possibility of reverting to the old pension scheme (OPS).

On Monday, the Aam Aadmi Party’s (AAP) Mann said on Twitter, “My government is considering reverting to the old pension system (OPS). I have asked my chief secretary to study the feasibility and modalities of its implementation. We stand committed to the welfare of our employees.”

My government is considering reverting to the Old Pension System (OPS). I have asked my Chief Secretary to study the feasibility and modalities of it’s implementation. We stand committed to the welfare of our employees.

What is the OPS? How is it different from the New Pension Scheme? What are the politics behind reverting to OPS and what does it mean for the pensioners? Here’s a one-stop guide to knowing everything about the scheme and the pros and cons of each of them.

What is OPS and NPS?

In the old regime, pension was 50 per cent of the last drawn salary of the employee and the entire amount was paid by the government.

The New Pension Scheme (NPS), launched as a way to reduce pension liabilities, allows subscribers (government employees) to decide where they want to invest their money by contributing regularly in a pension account throughout their career. At the age of retirement (60 years), you can withdraw 60 per cent of the proceeds as lump sum. This sum was taxable earlier but is now tax-free. Pensioners can use the rest to buy an annuity for a regular income. 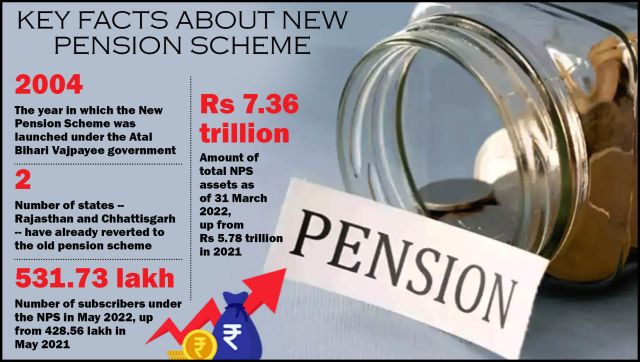 Under the NPS, effective for employees who joined on or after 1 April 2004, the employees contribute 10 per cent of their salary towards pension and the state government contributes 14 per cent. The amount is then deposited with Pension Fund Regulatory & Development Authority (PFRDA) where it is invested.

The key differences between OPS and NPS are that NPS invests employees’ contributions over the length of their careers in market securities such as equities. “Thus, the NPS generates market-linked returns without any assurance of returns, which the OPS provides by basing the monthly pension on the last salary drawn by the employee. NPS provides a pension fund on retirement which is 60 per cent tax-free on redemption while the rest needs to be invested in annuity which is fully taxable. Income from OPS is not taxed. Lastly, OPS may require governments to revisit their fiscal priorities while NPS was meant to ease that very requirement,” Adhil Shetty, CEO, Bankbazaar.com, explained to The Outlook.

Mann’s announcement of his government looking at reverting to the OPS is in response to the state government employees’ long-standing demand for the same.

In fact, the AAP had first promised to do away with the New Pension Scheme (NPS), and reintroduce the old pension scheme during the 2017 Assembly elections.

The issue was raised again last year in August by party leader Harpal Singh Cheema, who is currently the finance minister.

If implemented, the move is likely to benefit around 1,60,000 Punjab staffers who joined service after 2004, according to state employee unions leaders.

Arvind Kejriwal, the national president of the AAP, also hailed Mann, saying it was a “great decision”.

Which states have reverted to OPS?

Chhattisgarh was the first state to announce that it was reverting to the old regime. In February, Rajasthan’s Chief Minister Ashok Gehlot too announced the restoration of OPS for employees appointed on or after 1 January 2004.

The switch to the old pension scheme has in recent times become a hot political topic.

On 19 September, the Congress vowed to implement the old regime for state employees if it was voted into power in the state of Gujarat.

Senior Gujarat Congress leader Arjun Modhwadia said Mann was considering reverting to the OPS, whereas the governments in Rajasthan and Chhattisgarh have already implemented it.

“The Congress will do the same when voted to power in Gujarat. I have seen his (Mann’s) tweet. He has only said he will consider it. He has not made any announcement or issued a government resolution for the same, nor taken any decision. On the other hand, Congress governments in Rajasthan and Chhattisgarh have implemented it,” Modhwadia told reporters as per PTI.

“It is our promise to all the employees in Gujarat who joined on or after 2004 that we will do the same here when voted to power,” reiterated Gujarat Congress state in-charge Raghu Sharma.

In fact, the National Movement for Old Pension Scheme — a nationwide organisation set up seven years ago demanding the scrapping of the NPS — has said that it would support any political party in Gujarat and Himachal Pradesh elections which promises OPS.

On Tuesday, Arvind Kejriwal also vowed that if the AAP came to power in Gujarat, it would implement OPS. 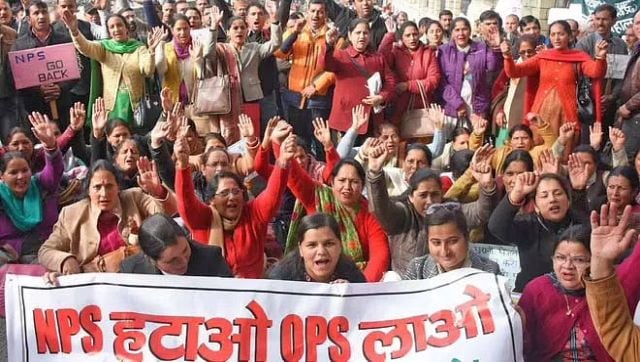 State government employees have long been demanding for the switch to the Old Pension Scheme. PTI

Vijay Kumar Bandhu, who is president of the National Movement for Old Pension Scheme, has hailed the old regime, arguing that under the NPS the pension does not increase with subsequent pay commissions; there are few benefits in case of death while in service; and employees have to deal with private insurance companies, and not the government, in case of a dispute.

However, financial experts state that under the OPS, the burden on state finances would only rise. 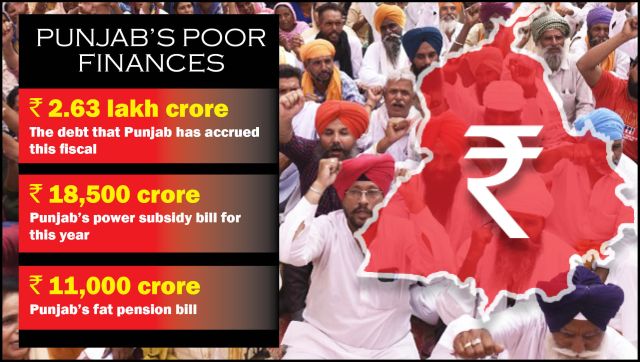 Renuka Sane, associate professor at National Institute of Public Finance and Policy, Delhi, echoed similar sentiments, saying, “OPS is fiscally unsustainable because of demographic transition. There are more old people now. You are paying through the tax revenue system, as there is no contribution. Earlier, people would live five to 10 years post retirement. Now, people live 25 years post retirement. Then their family or spouse will live another five years. So the obligation on the government becomes huge.”

In March, SBI research said that the old scheme is not sustainable for state’s finances even though it is always an attractive option for political parties as current aged people can benefit from the old scheme even though they may not have contributed to the pension kitty.
“We should not commit fiscal hara-kiri in the quest for populism. Otherwise it will be disastrous for the country’s growth potential and at the same time place a higher burden on our younger generation,” the report, which was authored by SBI Group Chief Economic Adviser Soumya Kanti Ghosh, read.

Funded, Not Fired: The company that is coming to the rescue of employees laid off from Meta, Twitter, Amazon

The company called ‘Day One Ventures’ was launched in 2018 by Masha Bucher after she was laid off from her company. Under the programme called ‘Funded, Not Fired’ the firm will write cheques worth $100,000 to 20 start-ups by the end of the year