Explained: Why are some seers resisting the gold makeover of the Kedarnath temple?

A section of priests has opposed the move to cover the walls inside the sanctum sanctorum of the Kedarnath temple in gold. The row began after a Mumbai-based Shiva devotee offered to donate gold for the Char Dham shrine’s renovation, which was approved by the Uttarakhand government

Some seers have opposed the move to replace silver coating of the walls inside the sanctum sanctorum of the Kedarnath temple with gold. PTI File Photo

The gold makeover of the walls inside the sanctum sanctorum of the Kedarnath temple– one of the Char Dham shrines– has spurred a row in Uttarakhand.

A section of priests has raised protests against the decision cleared by Badri Kedar Temple Committee (BKTC) and the Uttarakhand government.

The teerth purohits (pilgrimage priests) have said that the gold plating of the walls of the Himalayan temple was tantamount to “tampering with its centuries-old traditions”, PTI reported.

However, the Badrinath-Kedarnath temple committee president Ajendra Ajay has dismissed the protests as “opposition propaganda”.

How did the controversy start? Why are some seers protesting the facelift of the Kedarnath temple?

Let’s examine the issue in detail:

As per media reports, a Mumbai-based Shiva devotee offered to donate gold for the revamping of the walls inside the sanctum sanctorum.

The Kedarnath’s sanctum sanctorum walls were coated in silver in 2017.

As much as 230 kg of silver was used to cover the walls which will now be replaced with gold, reports Indian Express.

As per The Hindu, the gold renovation work began last week and will be finished before Diwali, the chairman of Badarinath-Kedarnath temple committee said.

He apprised that the walls, pillars and the chatra (shed) above the deity will get a gold plating.

Ajay also claimed that the gold donation was a ‘gupta daan’ (secret donation) by the businessman, who other officials said was a diamond merchant. 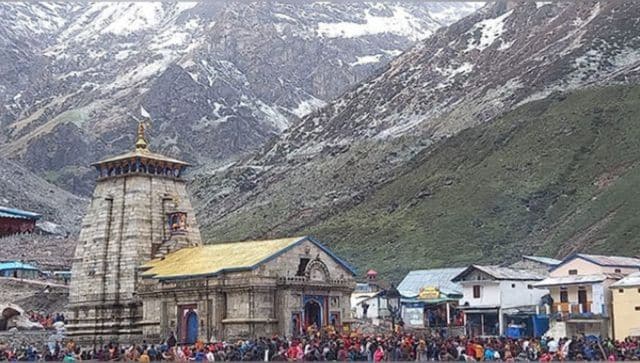 A Mumbai-based Shiva devotee offered to donate gold for the revamping of the walls inside the sanctum sanctorum of the Kedarnath temple. ANI File Photo

“We have already started removing silver from the sanctum of the temple. Then the copper plates will be placed on the walls and four pillars inside the sanctum. This will be done to take measurements. Once the measurements will be done, they will replace the same with gold plating,” he was quoted as saying by The Hindu.

Notably, the businessman had sought the government’s nod for the gold donation, which he received last month, saying it was his “long-time wish” to see the Kedarnath’s sanctum sanctorum walls in gold, reports Indian Express.

Some seers are unhappy with the move as they say gold reflects “wealth and worldly pleasures”, which stands against the values of the holy shrine, which denotes “detachment” from the physical world, notes Indian Express.

“For centuries, our lord is in the form of stones and ‘praan pratishtha’ is done there. Adding gold plates might be an important renovation for the world but for Lord Shiva it is just like a plastic surgery. Kedarnath is the moksha dhaam (place of salvation) and symbolises vairagya (detachment),” Trivedi was quoted as saying by Indian Express.

Further, he argued there is no requirement of anything materialistic as Lord Shiva had left the world behind when he came to the Himalayas.

Congress has also backed the section of priests opposing the makeover, saying it is against traditional beliefs. 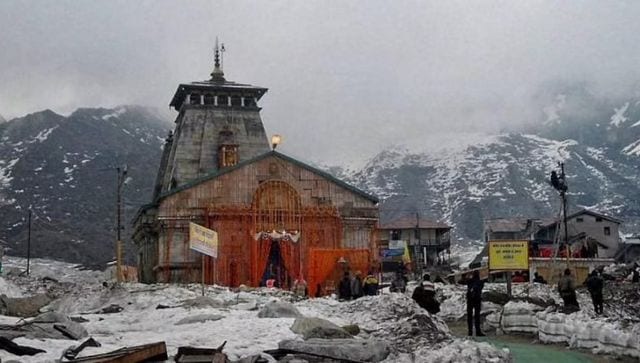 Congress has also backed the section of priests opposing the makeover, saying it is against traditional beliefs. PTI File Photo

“Shiva is not a god who enjoys luxury. Shiva, in accordance with classical belief, favours ‘bhasma’ over ‘gold’. The temple committee intends to violate Sanatan Dharma,” Manoj Rawat, a former Kedarnath MLA, was quoted as saying by The New Indian Express (TNIE).

He further suggested the state government and BKTC decide on the issue only after consultation with experts.

Moreover, some priests have claimed the drilling machines being used for the facelift are damaging the Kedarnath temple’s walls which have withstood several disasters in the past.

Brushing off the claim of the protesting priests, senior priest at the temple Shrinivas Posti and former president of Kedar Sabha Mahesh Bagwadi said the Kedarnath shrine is a “major centre of Sanatan faith”, and the gold plating on its walls does not oppose Hindu beliefs, reported PTI.

The Badrinath-Kedarnath temple committee president also maintained that the makeover is not tinkering with the original temple structure.

“Renovation and beautification of the temple from time to time is a normal practice. A handful of priests may oppose it but their representative bodies never opposed it. Decades ago the temple ceiling used to be made of grass and twigs. As the times changed it began to be made of stones and later of copper sheets,” he was quoted as saying by PTI.

He also said the gold renovation was in line with the Hindu faith and traditions.

Ajay warned that action will be taken “against those who will oppose the development”, The Hindu reported.

WATCH: How Indian kite takes the bite out of Pakistan drones