Explained: Is it safe to consume milk from cattle infected by lumpy skin disease?

The lumpy skin disease (LSD) has hit cattle in at least eight states so far, with the highest casualties in Rajasthan.

As per the official data by the Department of Animal Husbandry, more than 75,000 cattle have died and 16.42 lakh cattle have been affected in 197 districts due to the outbreak this year since the first infection was reported in Gujarat’s Kutch in April.

The death of thousands of cows and bulls is a major cause of concern for farmers whose livelihood depends on these animals.

Even with the kick-off of a major vaccination drive, LSD continues to take a toll on the cattle population.

What is lumpy skin disease? Is the milk produced by infected cattle safe? Which states have been affected?

Let’s have a detailed analysis:

The virus affects cattle and spreads by blood-feeding insects including mosquitoes, flies, and lice. It can also transmit from contaminated fodder and water.

According to European Food Safety Authority (EFSA), LSD leads to fever and nodules on the skin. The chances of casualties are higher in the case of animals who have not been exposed to the virus previously.

Is milk of infected cattle safe to consume?

A senior official of the Indian Veterinary Research Institute (IVRI) has assured that the milk of infected cattle is safe to consume as LSD is not a zoonotic disease.

LSD does not spread from animals to humans.

“It is safe to consume milk from the infected cattle. There is no problem in the quality of milk even if you have it after boiling or without boiling,” IVRI Joint Director AK Mohanty told PTI. 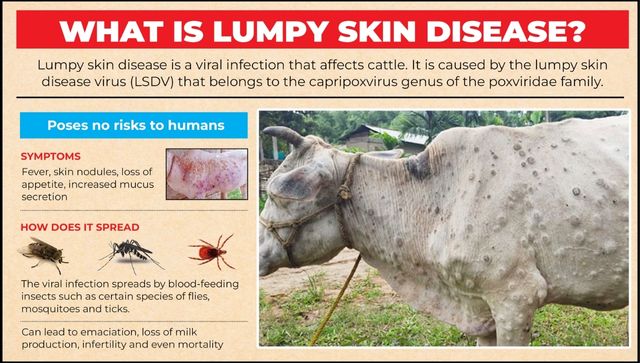 As per the Department of Animal Husbandry, at least 75,000 cattle have died and 16.42 lakh affected due to LSD in the country. Graphic: Pranay Bhardwaj

Mohanty also said the effect of LSD on milk production of the infected cattle depends on the severity of the disease and the immunity level of the animal.

As many as 51,000 cattle deaths have been reported in Rajasthan officially, while 11 lakh have been affected by the viral infection.

The lumpy skin disease has alarmed the farmers in this desert state whose primary source of income is the milk produced by these animals.

Jaipur Dairy Federation, the biggest milk cooperative in Rajasthan, told NDTV that milk collection has reduced by 15-18 per cent and is now 12 lakh litres, down from the normal 14 lakh litres.

“Before Lumpy struck, we used to get 14 lakh litres of milk daily at the cooperative, but now it’s down to 12 lakh litres. Though there has been no disruption in milk supply, we are worried over animal deaths as the figures in reality are definitely more than what is being stated officially. If this continues, there could be a crisis – worse than what we faced during Covid-19,” Om Poonia, the chairman of Jaipur Dairy Federation, said.

A senior official at Rajasthan Cooperative Dairy Federation (RCDF) has told Business Standard that presently, milk production has not dropped for cooperatives, however, it has affected private dairies. India is currently administering the ‘goat pox vaccine’ to all cattle hit by the disease. PTI

The official further underlined that LSD may have a long-term impact on milking cattle affecting their fertility and even that of their offspring, reported Business Standard.

Meanwhile, Chief Minister Ashok Gehlot has written to the Centre twice in a fortnight urging the government to declare LSD a national calamity as the viral has proliferated to multiple states.

India is currently administering the ‘goat pox vaccine’ to all cattle hit by the disease.

Rajasthan has 16.22 lakh goat pox vaccine doses, out of which 12.32 lakh cattle have been administered the shot as of now, as per NDTV.

Gujarat is the second worst-afflicted state by LSD in terms of cattle death which is over 5,000 since the outbreak.

Till 13 September, Maharashtra has logged 2,664 cases of the lumpy skin disease in the cattle with the death toll at 43 across 21 districts, reports Hindustan Times.

LSD has also spread in states and Union Territories such as Punjab, Haryana, Himachal Pradesh, Uttarakhand, Uttar Pradesh, Delhi and Jammu & Kashmir among others.

Sanjeev Balyan, Minister of state for animal husbandry, fisheries and dairying, stated that the LSD outbreak will have a “minimal” impact on the country’s milk production, Business Standard reported.

“The disease is more in cows and we in India have around 100 million breeding cows of which around 1 million have been infected. So, you can understand how much will be the impact on milk production. I don’t think there will be any big impact of LSD on the country’s milk production. It will be less than 1 per cent,” he told Business Standard.

Tejia Ganawa was a resident of Pratapgarh in Uttar Pradesh. His daughter was married in Danapur in the Banswara district of Rajasthan. He had come to his daughter's house about three months ago