New Delhi: With a 110-metre long national flag, Gorkhaland supporters on Sunday marched in the national capital to reinforce their demand for a separate state and the immediate imposition of President's Rule in West Bengal. 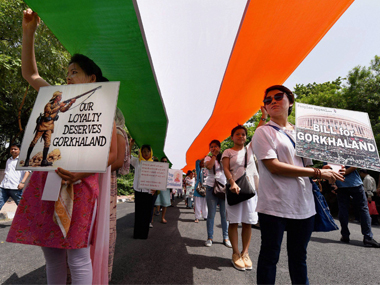 Members of People's Movement for Gorkhaland carry a 110 metre-long tricolour during a peace march from Rajghat to Jantar Mantar, in New Delhi on Sunday. PTI

"The West Bengal government is treating common people like terrorists and killing them. The central government should remove paramilitary forces and terminate the services of the Director General of Police," GSSS president Kiran BK told PTI.

The protesters marched from Rajghat to Jantar Mantar carrying the flag, depicting 110 years of their struggle for separate state.

The march culminated at Jantar Mantar where they joined their co-supporters who had been protesting for three weeks now.

"Just like Bengalis have their identity, we are fighting for ours. We are getting killed for seeking the rights we deserve. The Centre should look into the issue," said Stuti Thami of Darjeeling, adding that she was "ready to die" but not to stay under the West Bengal government.

Some of the placards that protesters carried criticised the BJP for its "attitude before and after the elections".

The Gorkha Janmukti Marcha (GJM) on Sunday planned to take out rallies against the alleged killing of its supporters in police firing in Darjeeling as the indefinite shutdown in support of their demand for a separate Gorkhaland entered the 25th day amid a strict vigil by the army and the police.

The army was re-deployed on Saturday after fresh violence erupted in the Darjeeling hills where Gorkhaland supporters torched a police outpost, the toy train railway station and clashed with the police at two places.