Kolkata: The situation in Darjeeling remained tense on Thursday on the 39th day of the GJM-sponsored indefinite shutdown, though there was no fresh violence or arson anywhere in the hills. 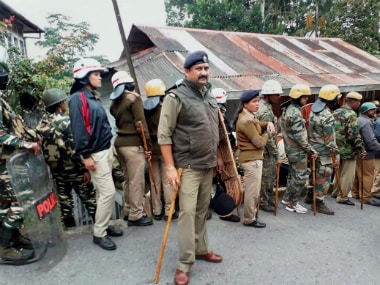 The police and security forces patrolled the streets in the hills as shops, except pharmacy stores, restaurants, hotels, schools and colleges remained closed.

The GJM held rallies in various parts of the hills in support of its demand for Gorkhaland.

In the morning, some political activists, dressed in traditional Nepali attire, took out rallies. They were heard shouting slogans in support of Gorkhaland.

Amid a severely hit food supply in the hills due to its ongoing shutdown, the GJM activists and NGOs of the hills were seen distributing food to the local people at many places.

The Gorkha Janamukti Morcha (GJM) is preparing for a prolonged underground armed movement for a separate state and has hired Maoists from neighbouring countries as mercenaries to train its cadres, according to senior West Bengal government officials.

"We have inputs from intelligence agencies that Maoists from neighbouring countries have been hired by the GJM. And it may target government properties and senior police and administrative officials so as to further aggravate the situation," ADG (Law and order) Anuj Sharma had told PTI.