The outbreak of COVID-19 has brought into sharp focus the major international migration corridors India shares with the world including the Gulf, Europe, and North America. Many of the Stage 1 imported cases in India came through these corridors as emigrants returned to their families. Conversations with emigrant Indian workers and major recruiters in the Gulf countries reveals a frantic desire to return to their home regions (often in rural areas).

A sound understanding of emigrant corridors is crucial if we are to successfully pre-empt the spread of the virus in the coming months. India has the highest number of international migrants in the world, according to the World Migration Report, 2020. Out of the total population of 272 million international migrants, almost 6 percent (~ 17 million) of them are Indians. This includes students, workers and their family (spouses, parents etc.).

Since the start of the crisis, India has evacuated its citizens multiple times, first from China and then from Italy, totalling about 842 rescued, according to a press release of 9 March. In the last few months, there has also been considerable return migration from countries in Europe, America, and the Gulf. In Telangana, for instance, conversations with migrant welfare workers reveal that anywhere from 20,000 to 40,000 Gulf emigrants returned earlier this month and have been quarantined. On 22 March, India restricted all international travel to ensure that no one comes or returns to the country.

The United States has witnessed an exponential rise in COVID-19 infections with a total of 189,633 cases as of 1 April 2020, the highest worldwide. The states of California, Illinois, Michigan, Massachusetts, New Jersey, Florida, and New York have recorded the highest number of infections. Four out of the seven states (California, Illinois, New Jersey, and New York) have the highest concentration of Indian immigrants, especially California where 20 percent of all Indian immigrants resided, between 2011 and 2015.

157,695 Indians lived in Italy as of 2016, mostly comprising students and dairy industry workers. Students form a sizeable population in certain Italian cities such as Milan in the north (one of the worst affected by the virus) while the dairy industry workers, mostly Sikh workers from Punjab, are also concentrated in the northern region of the country. While the composition of emigrants in Italy who have been rescued is still unknown, Punjab may be at a higher risk because 70 percent of the Indian emigrants in Italy hail from there. Northern Italy, where most Punjabi emigrants are located, is the epicentre of Italy’s outbreak. As of 1 April, Punjab has reported 46 COVID-19 cases.

In Catalonia, Spain which has the second highest numbers of confirmed COVID-19 cases, after Madrid, there has been an almost 40 percent rise in Indian citizens between 1998 and 2012. The migration is mostly from Punjab, again. An overwhelming majority of the Indians are employed in the services sector (75 percent). The recent immigration is mostly categorised by employment in sectors which require lower specialisation, like agriculture.

For India, the current 55,669 returnees from US, UK, Spain, and Italy amid the pandemic hints at the possibility of Punjab becoming an epicentre in the country, considering that only 30,000 have, so far, been traced. The Doaba districts of Punjab (Kapurthala, Hoshiarpur, Jalandhar, and Nawanshahr) are the major source of emigrants to Spain, a considerable number of whom also come from lower-caste, landless households – the Ravidassia Sikh community.

As cases in Germany soar past 70,000, Indian nationals stay stranded in the western European nation. Germany currently hosts 142585 Indian emigrants. The Federal Statistical Institute of Germany’s figures reveal that as of 2018, 17,000 (22 percent) of all Indian emigrants in Germany are students, forming the second-largest group of international students. Another considerable proportion of Indian population is present in the United Kingdom which is currently grappling with the crisis as well. There have not been any evacuation flights from the UK, leaving almost 3,50,000 Indian emigrants stranded.

EMIGRATION AND COVID-19 PROFILES IN THE GCC

The Gulf Co-operation Council (GCC) countries, hosting almost 8.8 million Indians, have registered a total of 3538 cases as of 31 March, with Saudi Arabia registering the highest (1453). The GCC (United Arab Emirates, Saudi Arabia, Oman, Kuwait, Qatar, and Bahrain) has a longstanding relationship with India, especially Kerala. This dates from the mid-1970s, when the oil boom spurred demand for both skilled and unskilled labour. Since then, there has been a considerable outflow of people from Kerala to countries in the Middle East, especially Saudi Arabia and United Arab Emirates (UAE). The Gulf migration story has now expanded to other states of the country, like Telangana, Uttar Pradesh (UP), and Bihar.

Disease hotspots may emerge due to return migration According to data collected in the Kerala Migration Survey, 2018 (conducted by the Centre for Development Studies, Trivandrum) 89 percent of Kerala’s emigrant population had migrated to the Gulf countries. Latest cluster data on the spread of COVID-19 cases in Kerala shows that the most affected districts are Kasaragod (121), Kannur (47), Ernakulum (23), Pathanamthitta (12), Malappuram (12) and Thiruvanthapuram (12).

Data collected in the Tamil Nadu Migration Survey of 2015 shows that 38 percent of Chennai’s emigrants are in the Gulf, as well as 49 percent of Erode’s, 27 percent of Coimbatore’s, and 62 percent of Madurai’s. According to COVID-19 cluster data on Tamil Nadu, Coimbatore is the worst affected with 33 cases, Tirunelveli and Chennai, both with 29, Erode with 21, Theni with 20, Namakkal with 18, Dinidigul with 17, and Madurai with 15.

Coimbatore, with the highest average remittances in Tamil Nadu, saw a sudden spike of cases from 5 to 33 on 1 April, possibly due to a recent religious meeting in Delhi attended by over 1500 from TN. 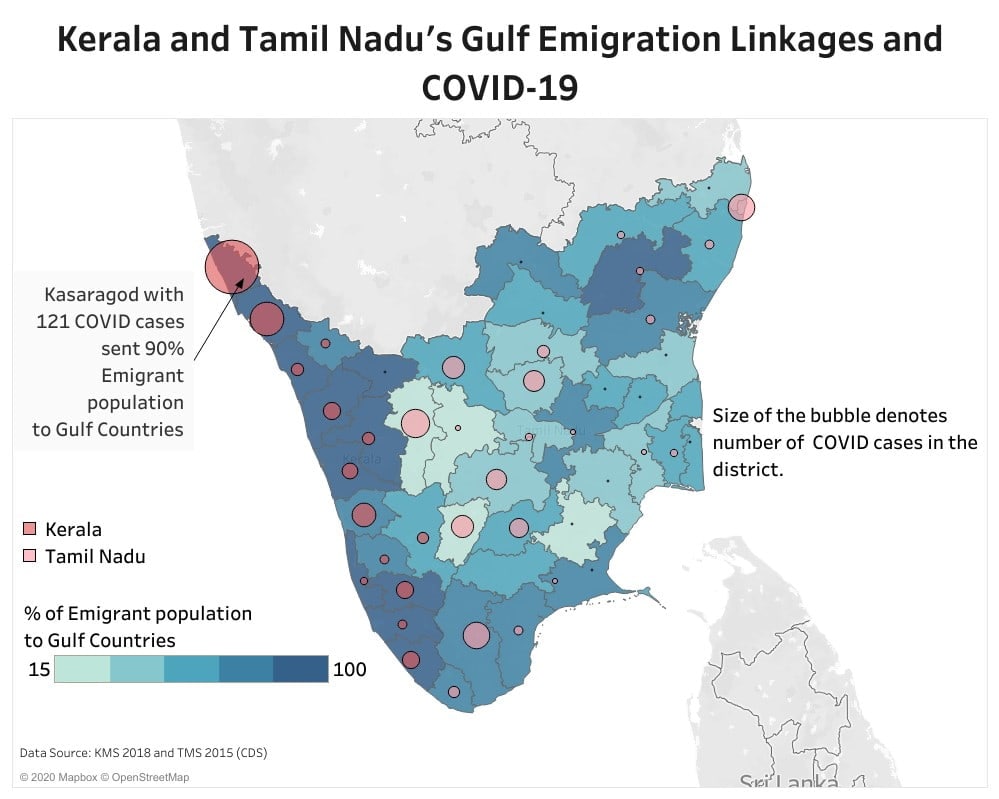 There is little clarity so far about how many Indian workers are affected in the GCC countries. But the 8.8 million strong population is at risk of swift community spread, especially due to the cramped conditions that foreign workers live in.

“There are over 1.3 million migrants from Telangana in the Gulf and around 40000 returned earlier this month (March) and are in quarantine. Many more want to return but it is highly likely that they will be infected. Workers there are forced to live with 10-20 people in a room and there is no way to follow social distancing norms.” said Swadesh Parkipandla, President of the Pravasi Mithra Labour Union, in the district of Jagtial, Telangana. Return migration during a disaster has also previously been observed at the time of the 2018 Kerala floods.

As the Gulf countries slowly shut down non-essential industries, migrants facing job loss and no income are desperate to return. Many already have, over the past one month, leading to a spike in cases in Kerala, in particular. The COVID-19 crisis has already highlighted Kerala's strong international migration linkages, with India’s first three known cases in January 2020 being imported ones from Wuhan, the epicentre in Hubei, China.

Subsequently, a new spate of cases erupted in Kerala in March, with the northern districts of Kasaragod and Kannur registering the highest number. 44 out of 63 fresh cases reported between 22-24 March were imported from Dubai.

KMS data shows that Malappuram and Kollam rank the highest in terms of emigration as well as return migration. As of 1 April, the former has registered 12 cases while the latter has registered 3, but without swift action, these may emerge as sites of infection as well. Kasaragod and Kannur both rank relatively lower in emigration and return migration but like the other districts, share the strongest migration linkages with UAE and Saudi Arabia, the latter being the worst affected in the GCC.

Kasaragod’s high case point may be because of its particular relationship with Dubai: the district, with 121 cases as of 1 April, sends emigrants to the textile sector of Deira Naif, Dubai, from where almost every return migrant has been testing positive, according to a 25 March report in The Lede.

Kasaragod locked down on 21 March after the case of the suspected super-spreader, Ameer A, came to light. According to interviews conducted in Dubai by The Lede, labour camps in the UAE are particularly vulnerable to swift proliferation due to unhygienic, cramped living conditions. However, Kerala and Tamil Nadu are not the only states that may be at risk due to return migration from the Gulf. The latest emigration data from the Ministry of External Affairs e-Migrate portal shows that in 2019, 14 of the top 20 emigrating districts were in Uttar Pradesh (11) and Bihar (3), with the popular destination countries being UAE, Saudi Arabia, Qatar, Oman, Kuwait, and Bahrain.

These districts include Jaunpur, Gorakhpur, Bareilly, Azamgarh, and Bijnor in UP and Darbhanga, Gopalganj, and East Champaran in Bihar. UP and Bihar, being possible future red zones, along with Kerala and Punjab, was also pointed out by migration expert and IIM Ahmedabad professor, Dr Chinmay Tumbe, on 29 March.

For instance, studies conducted by the Centre for Migration and Inclusive Development (CMID) show that migrants from 25 Indian states work in Kerala, with the largest groups coming from Assam, West Bengal, Odisha, Jharkhand, Bihar, Tamil Nadu, Karnataka, and Uttar Pradesh. These internal migrant linkages between states in India escalate the risk of rapid local transmission.

Since coming home from Saudi Arabia earlier this week, Narendra, an emigrant from Telangana, has had his passport seized and has been in quarantine, with regular checks from the district officials. Despite this, he and his family have experienced discrimination from locals. This seems to be a recurring story around the country with reports of poor migrants undertaking arduous journeys home only be greeted with bleaching sprays and social ostracism.

This includes families of return migrants who are not being allowed in public spaces to collect water, according to a report by Indiaspend. Phone calls to local police stations reporting return migrants from cities has also become a common occurrence. Similar stigma has been experienced by doctors, medical personnel, and others suspected to have been exposed to the virus. Although the emphasis on physical distancing is important for the sake of public health, ostracism of return migrants sets a dangerous precedent, disincentivising people from reporting their true whereabouts and movements.

India’s intricate migration relationships, both internationally and internally, have been laid bare in the wake of the country’s 21-day COVID-19 lockdown. Currently, there is little clarity about the condition of Indian emigrants in destinations such as the Gulf. The risk of contagion due to mass return migration post lockdown demonstrates that tackling this public health crisis will require an understanding of how India migrates.

The authors are part of the research team at India Migration Now, a Mumbai based migration data and research organisation. IMN is a venture of the South East Migration Foundation. Follow their work: Twitter/@nowmigration; Instagram/@indiamigrationnow