The health ministry on Thursday said that 88 new cases of the novel coronavirus were reported in the country in a day, which is the highest jump of infections in a single day. The total number of cases rises to 694, the statement said.

The Central Reserve Police Force (CRPF) on Thursday made a donation of Rs 33 crore to the Prime Minister's National Relief Fund for those affected by the coronavirus pandemic. "We are dutifully committed to stand firmly with our Nation in this challenging time of COVID-19 spread. It’s a unanimous decision and a sincere effort by our personnel. The effort was to make the immediate contribution with the noble intent to keep it unrevealed. The CRPF remains steadfast towards its motto of service and loyalty," the statement said.

After a video of police personnel in Uttar Pradesh's Badaun making migrant workers crawl on the roads went viral on Thursday, the Uttar Pradesh Police issued an apology for the incident and said that disciplinary action had been initiated.

"Being the police chief of the district, I feel sorry and apologise for this. Investigation is being conducted against the responsible person," said Ashok Kumar Tripathi, Senior Superintendent of Police (SSP) Badaun.

Defence Research and Development Organisation (DRDO) chairman, Dr G Satheesh Reddy was quoted by ANI as saying, "We have also developed N-99 and three-layered masks, we have produced more than 20,000 masks and supplied to various agencies, including Delhi Police."

State governments like Jharkhand and Rajasthan have reached out to native migrants in other states as the 21-day complete lockdown over the coronavirus was imposed on Tuesday.

Rajasthan deputy chief minister Sachin Pilot replied to NC leader Omar Abdullah regarding some Kashmiri students stranded in Rajasthan's Kota district. Pilot said, "Kota district officials and local police are in touch with these students now. Will be provided transport and/or accommodation, meals. And also to all other such stranded students from all over the country."

Joint Secretary of the health ministry, Lav Aggarwal, said that while cases of coronavirus are increasing in India, the rate at which they are increasing "appears to be relatively stabilising". "However, this is only the initial trend," he said in the daily briefing on Thursday.

The Ministry of Health and Family Welfare has issued a gazette notification easing the rules to allow the retail sale of drugs to the doorstep of patients during the 21-day nationwide lockdown.

These medicines fall under the schedule H category which means such drugs cannot be purchased without the prescription of a qualified doctor. The new rules allows submission of prescription in electronic forms if it gets delayed in case of acute crisis.

Bihar Chief Minister Nitish Kumar has announced a grant of 100 crores for the coronavirus relief fund which will include shelter and food for labours, rickshaw pullers, roadside vendor and other poor people. He said that shelter camps will also be made along with the health facility.

Kumar had already announced that his state government will bear the treatment costs of coronavirus patients. In a bid to ease the hardships that the poor may face on account of the lockdown necessitated by the coronavirus outbreak, Kumar had also on Wednesday announced that all ration card holding families in the state will get an assistance of Rs one thousand each.

Under the Prime Minister Gareeb Kalyan Yojana (food scheme), 80 crore people will be benfitted, said Finance Minister Nirmala Sitharaman. "Every one under this scheme will get 5 kg of wheat/rice for free in addition to what they are already getting. We will also give one kg of one choice of pulse to each household under this scheme for the next three months. They can take it in two installments also," said Sitharaman.

Finance Minister Nirmala Sitharaman is expected to address the media in New Delhi at 1 pm. The finance minister is likely to announce a relief package amid 21-day nationwide shutdown over coronavirus pandemic.

"The special flight will be operated as per Government of India's request and the airline will deploy its Boeing 737 aircraft for the assignment," the low-cost carrier said in its press release

According to the Union Health Ministry, the number of cases of coronavirus infection has reached 649 across the nation. The number of patients who have recovered and discharged from hospitals are 42. So far, India has reported 13 deaths.

Kashmir recorded its first death due to the novel coronavirus after a 65-year-old man from Soporev who tested positive to COVID-19 passed away at Chest Disease hospital Srinagar on Thursday morning.

According to Kashmir News Observer, the person died due to cardiac arrest and he had a long medical history of hypertension, diabetes, and obesity.

A three-year-old is among two COVID-19 positive cases reported in Telangana on Wednesday, health officials said. The boy recently returned with his parents from Saudi Arabia. He has been admitted to a hospital where his condition is stated to be stable.

A 43-year-old woman from Hyderabad with no history of international travel has also tested positive. She is the primary contact of a positive case reported earlier.

Amid the worldwide increase in COVID-19 cases, World Health Organisation (WHO) Director-General Tedros Adhanom Ghebreyesus on Wednesday said that a nationwide shurdown, which is being implemented by India and many other countries to curb the fast-spreading virus, will not be enough to eradicate the pandemic.

"To slow the spread of Covid-19, many countries introduced "lockdown" measures. But on their own, these measures will not extinguish epidemics. We call on all countries to use this time to attack the novel coronavirus. You have created a second window of opportunity," Tedros Adhanom Ghebreyesus said in a press conference.

A day after Prime Minister Narendra Modi announced a nationwide lockdown to contain the coronavirus pandemic, nearly 90 more coronavirus positive cases were reported in India, taking the total number of cases to 606 on Wednesday.

On Tuesday, the number of cases was 519.

The death toll due to the virus increased to 10 with another fatality being reported from Maharashtra, according to official data.

Madhya Pradesh reported its first coronavirus death, a woman who succumbed to viral infection, an official was quoted by PTI as saying.

However, in what may be seen as some reassuring news, joint secretary in the health ministry Lav Agarwal told CNN-News18 that no community transmission of the novel coronavirus has been reported in India yet. 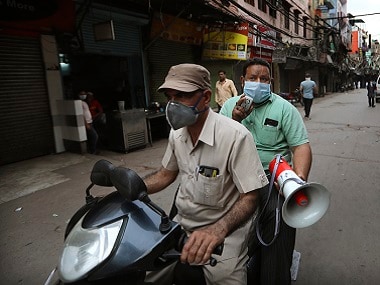 Civil defense volunteers on a scooter ask people to go inside their houses during a lockdown to control coronavirus spread in New Delhi. AP

In its updated figures at 6.45 pm on Wednesday, the ministry stated that Maharashtra has reported three deaths and one death each was reported from Bihar, Karnataka, Gujarat, Punjab, Delhi, West Bengal, and Himachal Pradesh.

Karnataka has reported 41 cases of coronavirus patients, while cases in Gujarat rose to 38, including one foreigner.

Cases in Uttar Pradesh rose to 37, including a foreigner. The number of cases in Rajasthan increased to 36, including two foreigners, while the positive cases in Telangana stood at 35, including 10 foreigners.

Cases in Delhi rose to 31, including one foreigner.

Punjab reported 29 cases while In Haryana, there are 28 cases, including 14 foreigners.

West Bengal and Andhra Pradesh have nine cases each.

Chandigarh, as well as Jammu and Kashmir, have reported seven cases each so far.

There are three cases in Himachal Pradesh while there are two cases in Odisha. Puducherry, Mizoram, Manipur, and Chhattisgarh have reported a case each.

Narendra Modi, noting reports of doctors facing discrimination for treating coronavirus patients in several parts of the country, said that he is very pained with the discriminatory behaviour against the staff of essential services. Warning against discrimination, he said that "people in white coats and doctors are like God right now, they are protecting us".

"I appeal to all the citizens, if you notice any incident where professionals, such as doctors and nurses, are ill-treated then you should take an initiative to make such people (those who are ill-treating healthcare professionals) understand that they are wrong. I have told Home Ministry and DGPs to take strict action against those who are not supporting or not co-operating with doctors, nurses and other professionals who are serving us in this critical time," Modi said in his address to the citizens of Varanasi on Wednesday.

In a similar vein, Delhi chief minister Arvind Kejriwal said, "Some landlords are threatening to evict doctors/nurses from their houses. They're saying they'll (medical personnel) spread the coronavirus. It won't be tolerated. God forbid, if someone gets infected from your house then they, and no one else, will come to your rescue...."

He also announced that beneficiaries of the social security pension scheme, widow pension, old-age pension and destitute pension schemes will get two months' pension in advance.

Labourers in the unorganised sector will be given financial assistance of Rs 1,000 each through the Sannirman Karmkar Mandal, said Chouhan who took over as chief minister two days ago.

Further, an advance of Rs 2,000 per family would be provided to members of the Shariya, Baiga, and Bhariya tribal communities, he said.

As schools are closed, some 65.91 lakh students do not get mid-day meals at school. Therefore, Rs 155 would be transferred into the bank account of each primary school student and Rs 232 in the account of each middle-school student, adding up to an aid of total of Rs 156.15 crore, he said.

The Kerala government is planning to come up with 'community kitchen' to cater food to the needy, said Chief Minister Pinarayi Vijayan.

The state is also going to come up with 1,000 restaurants that will provide home delivery of food at a subsidised rate.

Speaking to media persons here on Wednesday, the Kerala chief minister said that the local self government institutions would ensure the supply of food items to those affected by the lockdown so that there is no starvation in the state.

"We expect people to cooperate and stay where they are as suggested by Prime Minister Narendra Modi. They should not violate the conditions enforced during the quarantine," he said.

The state cabinet had decided to come out with the Kerala Epidemic Disease Ordinance 2020.

Earlier in the day, the chief minister tweeted, "Kerala has taken extensive measures to ensure that no one will starve during the lockdown. Will be implemented through Local Self Governments, ward-level committees, and volunteer."

Meanwhile, in neighbouring Pakistan, the government suspended all domestic flight operations until 2 April to curb the spread of the novel coronavirus after the country reported nearly 1,000 cases from the COVID-19 infection, authorities said on Wednesday.

The nationwide tally of the COVID-19 patients has soared to 990 with 410 cases in Sindh; 110 in Balochistan; 296 in Punjab; 78 in K-P; 80 in Gilgit-Baltistan; 15 in Islamabad; and one in Pakistan-occupied Kashmir, The Express Tribune reported.

The National Disaster Management Authority has said that so far seven people have died due to the novel coronavirus and 18 recovered.

Spain recorded the world’s second-highest tally of coronavirus deaths after 738 more reportedly died on Wednesday, the country's deadliest toll in one day, according to AP.

With 3,434 coronavirus patients dead, Spain surpassed China’s death toll of 3,285. Italy still has the most deaths of any nation in the world with 6,820. Infections in Spain also rose 20 percent from a day earlier to 47,610.

Meanwhile, in Britain, Prince Charles, the heir to the British throne, has tested positive for the new coronavirus. The palace says he has mild symptoms.