'CJI is first among equals; nothing more, nothing less': Four SC judges say in address to media

New Delhi: In an unprecedented move, four senior most judges of the Supreme Court on Friday called a press conference and said the situation in the top court was "not in order" and many "less than desirable" things have taken place.

Unless this institution is preserved, "democracy will not survive in this country," the four judges said.

Justice J Chelameswar, the second senior judge after the Chief Justice of India, said "sometimes administration of the Supreme Court is not in order and many things which are less than desirable have happened in the last few months".

Chelameswar, who was accompanied by Justices Ranjan Gogoi, MB Lokur and Kurian Joseph at the press conference, said they had met CJI Dipak Misra this morning and "raised issues affecting the institution". Soon after the press conference by the four senior-most judges, the CJI called Attorney General KK Venugopal for a meeting, court sources said. 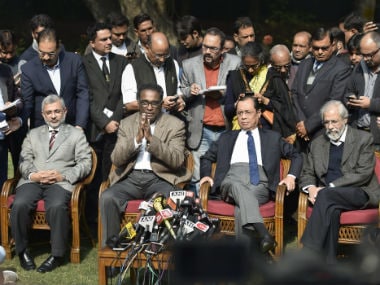 The press conference held by the Supreme Court judges. PTI

At the presser held at his house, Justice J Chelameswar said "unless this institution is preserved, democracy will not survive in this country" and added it was "extremely painful" to hold press conference in such a manner. He said the four judges had written a letter to CJI Dipak Misra some time back, raising important issues.

But all of them "failed to persuade CJI that certain things are not in order and therefore you should take remedial measures. Unfortunately our efforts failed. "And all four of us are convinced that democracy is at stake and many things have happened in recent past," he said.

Asked what these issues were, he said they included the "allocation of cases by CJI". The remarks assume significance as the Supreme Court today took up for consideration the issue of alleged mysterious death of special CBI judge B H Loya, who was hearing the sensitive Sohrabuddin Sheikh encounter case.

Justice Chelameswar said "we owe a responsibility to the institution and the nation. Our efforts have failed in convincing CJI to take steps to protect the institution."

"This is an extraordinary event in the history of any nation, more particularly this nation and an extraordinary event in the institution of judiciary ... It is with no pleasure that we are compelled to call this press conference. "But sometimes administration of the Supreme Court is not in order and many things which are less than desirable have happened in the last few months."

All the judges rubbished questions on whether they have broken ranks, with Justice Gogoi saying "nobody is breaking the rank and it is a discharge of debt to the nation, which we have done." Justice Gogoi would be succeeding the incumbent CJI in October this year.

Asked whether they wanted the Chief Justice to be impeached, Justice Chelameswar said "don't try to put words in our mouth".

The four judges, in their seven-page letter to the CJI, said "It is too well settled in the jurisprudence of this country that the chief justice is only first amongst the equals -- nothing more or nothing less."

The letter reads, "It is with great anguish and concern that we have thought it proper to address this letter to you so as to highlight certain judicial orders passed by this court which has adversely affected the overall functioning of the justice delivering system and the independence of the high courts besides impacting the administrative functioning of the office of the Chief Justice of India."

"There have been instances where cases having far reaching consequences for the nation and the institution have been assigned by the chief justices of this court selectively to the benches 'of their preference' without any rationale basis for such assignment. This must be guarded against at all costs," it said.