Chennai: Even as their leaders prepare to meet the Tamil Nadu Chief Minister J Jayalalithaa later today, the protestors against the Kudankulam Nuclear Power Plant (KKNPP) have come under tremendous pressure from various quarters.

Leading the pack for the multi-pronged attack are the central and state governments. Providing ground cover is Congress, BJP and other leading political parties; industries and traders; farmers; and even the general public who are reeling under severe power outages.

The central government, through the PMO, the home ministry and its atomic energy establishment, is engaged in a strategy that seeks to malign and weaken the movement while inducing an initially stubborn Jayalalithaa government. The central government has deployed a unique carrot and stick strategy: carrot for the state government and stick for PMANE (People’s Movement Against Nuclear Energy).

The carrot for the state government was brandished by the minister and Kudankulam pointman in the PMO V Narayanasamy when he said yesterday that the centre was willing to give all the 1000 MW of power from the first unit of the KKNPP to the state.

Politically, this is an irresistible carrot for Jayalalithaa. Thousand megawatts is equivalent to one fourth of the power that she needs to address the acute shortage that the state is facing now. The original allocation from the plant to the state was only 50 percent or 500 MW. Now the centre is asking the state to take it all.

Whether it is out of desperation or a wily ploy to get ahead, the offer definitely reeks of a plan.

And the stick? It is for the bad boy – the PMANE. 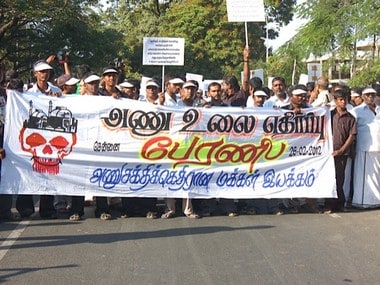 So far, the stick was soft - the centre tried to malign and discredit the movement. The PMO and the home ministry attributed motives and insinuated trans-national interests. When the PMANE was not ready to mend its ways, it changed the stick. Licenses of suspected NGOs cancelled, investigations ordered into their activities and a German national traced and deported. The investigation also comes in the wake of increasing demand for transparency of overseas remittances to Christian NGOs in Tamil Nadu, particularly in the southern coastal belt.

The story of trans-national conspiracy, or involvement of the West, has found a suitable symbol in a scruffy German national who was arrested by the state police on instructions from the central intelligence agencies. The state police has said they suspected that he was working for “someone” and that he had no need to camp in Nagercoil, close to the Kudankulam plant.

Information has also been leaked out that he had been in touch with SP Udayakumar, the coordinator of PMANE, and one of his associates.

Apparently, he participated in the anti-KKNPP agitations, provided advice to the protestors, and took photographs of the plant. He was reportedly on central surveillance since 2010.

Besides the carrot and stick policy, the centre had also opened other fronts of attack, mainly to mobilise favourable public opinion and counter PMANE’s campaign. The principal scientific advisor to the union government and a former atomic energy commission chairman, R Chidambaram was one of the main voices in this. He said besides providing power to four million people in the state, it will transform the economy of the coastal village of Kudankulam.

“Tarapore was a sleepy fishing village before the atomic power plant came up, but now it is a booming town. The same will happen to Kudankulam,” he said. The PR initiatives of the nuclear establishment had begun in the state a while ago with radio and TV spots. Leading scientists and educational institutions participated in campaigns and debates around atomic energy, safety, KKNPP and its economic benefits.

The report of the state expert panel submitted to Jayalalithaa yesterday is also likely to strengthen the PR campaign. The panel will most likely give a clean chit to the plant. The statement of MR Srinivasan, the head of the panel, that the plant was world class and can even withstand an earthquake or Tsunami (clearly targetted at naysayers post-Fukushima) was a certain give away. Although he didn’t divulge the details of the report, he said he stood by what he said initially: that the plant is safe and world-class.

On the ground, political parties, most importantly the Congress and the BJP, provided considerable artillery support to the KKNPP lobby. The state unit of the Congress was vociferous and organised public meetings and rallies across the state asking for an early commissioning of the plant. The BJP and its associates targetted PMANE and attributed motives to its interests. The left parties and DMK also supported the plant. Power-starved and angry industries and farmers came to the streets as well.

All the attention will be on Udayakumar today when he comes out of the state secretariat after his meeting with Jayalalithaa. His body language and choice of words, if he chooses to speak to the waiting media, will indicate which way the agitation will move.

If it is a collision course, it is certainly going to be bitter - probably ending up in a law and order situation.