Media reports say that the process of issuing a presidential warrant for his appointment has already been initiated.

The standoff between the executive and judiciary became evident following the government’s decision to return Justice Joseph’s name after holding it back for three months. Justice Joseph’s name was first recommended on 10 January along with the name of senior counsel Indu Malhotra. The government consented to the latter’s name in April, and she was appointed as an apex court judge on 27 April.

The Narendra Modi-led government's decision of agreeing to Justice KM Joseph's appointment shows that it is well aware of the fact that every time the executive has tried to excessively assert its powers with respect to the judiciary, the latter has struck back with greater force. Subsequent to such instances, the judiciary has evolved mechanisms like the Collegium and the 'basic structure doctrine' to ensure its independence and constitutional integrity.

While the current deadlock seems to have been resolved, it was not the first of its kind. 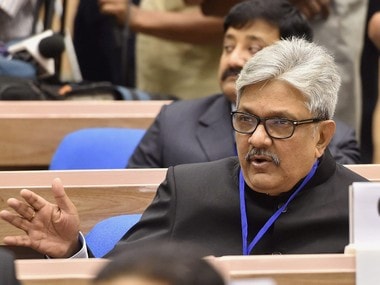 Soon after the formation of the new government in 2014, the Union law ministry turned down the Supreme Court Collegium’s recommendation to elevate the former Solicitor General of India Gopal Subramanium as a judge of the Supreme Court. The rejection of Subramanium's name attracted sharp reactions from the legal fraternity. Among these, the most notable was that of former Supreme Court judge VR Krishna Iyer, who expressed 'regret' over the government’s rejection, and appealed for a review of its decision.

Iyer had said that Subramanium's installation as a judge would be an honour for the Supreme Court Bench.

"To disallow him that post will be an indefensible disaster and disappointment, which the country need not suffer from at all. As a retired judge of the Supreme Court myself, I regret this measure of the prime minister. I hope he will reconsider his decision. The country cannot afford to lose a sound and splendid lawyer who will adorn the Supreme Court Bench,” Iyer had said.

The returning of Subramanium’s name would have created a similar situation to the one that prevailed in the past few months in the matter of Justice Joseph, had Subramanium not chosen to withdraw his candidature himself.

The government’s decision to return the name of Justice Joseph was termed as an 'unprecedented attack on the judiciary' by Opposition parties in general and the Congress in particular. However, it would be pertinent to remember that several such instances took place during the Congress rule in the seventies and eighties. This led to a cyclical assertion by the Supreme Court of its power and independence.

In the 1970s, two highly-criticised supersessions took place, wherein against the settled norm of appointing the seniormost judge as the Chief Justice of India (CJI), relatively junior judges were appointed to the post of CJI.

In the first case, three seniormost judges – Justice JM Shelat, Justice KS Hegde and Justice AN Grover — were superseded to make Justice AN Ray as CJI. This was due to their verdicts in the landmark Kesavananda Bharti case, which the then Congress government deemed to be unfavourable.

The second case was regarding Justice HR Khanna who, in the ADM Jabalpur case, held that even during the Emergency, high courts have the power to issue writs in the nature of habeas corpus— considered as crucial to secure individual freedom. For his judgement, he too, was superseded for the post of CJI by Justice MH Beg.

History bears witness that the Congress did not leave a single stone unturned to demolish judicial independence, due to which the Supreme Court delivered three landmark cases that led to the formation of the Collegium.

Justice Markandey Katju, in his recently published book ‘Whither Indian Judiciary,’ cites an important case in this regard — that of Justice GP Singh, who was the Chief Justice of the Madhya Pradesh High Court in the eighties. Katju wrote that Justice Singh, who was a judge of the 'highest integrity and principles,' and 'deserved to be made a Supreme Court judge by any standard' was not elevated simply because he scuttled the attempt made by then prime minister Indira Gandhi to "pack the high courts and Supreme Court with ‘committed judges’."

He wrote that following the Allahabad High Court verdict which held Indira Gandhi guilty of electoral malpractice and disqualified her, an attempt was made to appoint judges who would toe the government line. In this regard, sometime in the early 1980s, as Justice Katju writes, the central government sent a list of ten lawyers to the Chief Justice of Madhya Pradesh High Court GP Singh and asked him to recommend their names for elevation.

This was in clear contradiction to the settled norm, where the Chief Justice would recommend names to the government, and not vice versa.

Justice Katju writes that on examining the names, Chief Justice Singh found the names 'undeserving' and declined to recommend them for elevation; a decision that ensured that he was never elevated to the apex court.

The post-independence history of India is replete with cases, especially during the Congress rule in the seventies and eighties, that forced the Supreme Court to become 'overprotective.' This resulted in the creation of the Collegium system, which is now being criticised for its lack of transparency in functioning and rigidity in decision-making.

However, the current government has shown great wisdom by accepting Justice KM Joseph's elevation, as it will break the vicious cycle wherein every attempt by the executive to challenge the judiciary resulted in the latter asserting itself with greater force, and making itself all-powerful, and unaccountable to anyone.