Centre asks for Aadhaar to be made mandatory, SC says no

New Delhi: The Centre today failed to get any relief on Aadhaar card being made compulsory for availing social benefits, particularly gas cylinder subsidies, from the
Supreme Court, which turned down its plea to modify its interim order that no person be deprived of any schemes for want of Aadhaar.

A batch of top government lawyers including Attorney General GE Vahanvati and Solicitor General Mohan Parasaran tried their best to convince the court to modify its order, saying that it would severely affect grant of gas subsidies and the entire distribution system in 97 districts would come to a standstill.

However a bench of justices BS Chauhan and SA Bobde said it would pass the order after getting the response of the petitioners on the application moved by the Centre.

The bench in its interim order had said that the Aadhaar card be not made mandatory for people for availing any government services and nobody should be deprived of any such facilities for the want of the card. 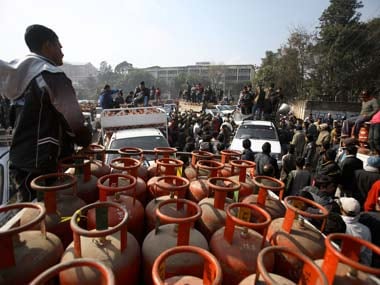 The Supreme Court had said that getting a Aadhaar card was not mandatory for services like LPG subsidies. Reuters

The bench however agreed to give an urgent hearing on a bunch of petitions challenging the legal status of Aadhaar card being issued by Unique Identification Authority of India (UIDAI).

Observing that the prevailing situation is a "double edged problem", the bench said that no order can be passed without hearing the parties who challenged the Aadhaar and posted the case for final hearing after Dussehra vacation.

Pushing hard to convince the bench, the AG submitted that the apex court interim order would have serious implications and thousands of people who are given gas cylinder subsidies would be affected.

"Aadhaar is the only fool proof mechanism to check misuse of subsidies. People won't get gas cylinder subsidies. 76 percent consumers are registered under the Aadhaar and they will be affected," the AG submitted.

Additional Solicitor General L Nageshwar Rao, appearing for oil PSU, also pleaded for modification of order, saying that distribution system would come to a grinding halt and we cannot get back to the old system.