If you are an animal lover, then finally there is a cess which you would be happy to pay—cow cess. To ensure the safety of cows, the Haryana Gau Sewa Ayog has sent a proposal to the Haryana government to impose a 5 percent 'cow cess' on movie tickets and an extra fee while booking banquet halls for functions. The commission also proposed the idea of levying Re 1 on each bag of wheat, paddy and other crops bought from the state market. A report in The Times of India quoted a senior officer as saying that such a tax from state markets could fetch the government Rs 100 crore annually.

Mayor Amarinder Singh Bajaj said that the resolution will be going for a final nod to the state government.

The cow cess has been proposed on other products as well. According to the proposal, Rs 10 has been proposed per bottle of Indian made foreign liquor and Rs 5 on domestic liquor. The committee suggested that 2 paise per unit of electricity should be charged in AC marriage halls and a cess of Rs 250 per should be charged for functions in non-AC halls.

According to a report by PTI, the Manohar Lal Khattar governement is also thinking of constituting a 'Gau Rakshak Task Force' on the pattern of Home Guards to ensure strict enforcement of the stringent cow protection law in the state.

"It is being considered to constitute a Gau Rakshak Task Force (Cow Protection Task Force) on the pattern of Home Guards so that the Haryana Gauvansh Sanrakshan and Gausamvardhan Act, 2015 could be strictly enforced," chairman, Haryana Gau Seva Ayog Bhani Ram Mangla said on Wednesday.

For the "protection and upkeep" of cows, Haryana Assembly had in March 2015 passed the legislation, which puts a complete ban on cow slaughter in the state and provides for a rigorous imprisonment ranging from three years to ten years for killing the animal. 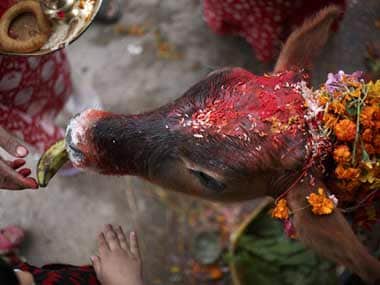 Special teams have been constituted to put a check on cow smuggling and cow slaughter in which 62 gazetted officers and 240 other rank police personnel have been included, he said.

According to Mangla at present there were more than 1.17 lakh stray cows in the State.

"As announced by Chief Minister Manohar Lal Khattar, it has been decided to set up ‘gau abhayaranyas' (cow sanctuaries) at five places in the State. A proposal has been received to set up such sanctuaries over an area of 200 acres in Panipat and 50 to 100 acres in Hisar, Sirsa and Bhiwani.

Cow sanctuaries would be set up in each district in the state in a phased manner," he added.

He said a workshop would soon be organised in all districts of the state to apprise police and district administration officials with minute details of Haryana Gauvansh Sanrakshan and Gausamvardhan Act, 2015.

The Haryana government had entrusted senior IPS officer Bharti Arora, the task to supervise and monitor the functioning of teams constituted in all districts to effectively check slaughter and smuggling of cows.

Under a special campaign launched by the Haryana government, more than 200 stray cows in district Faridabad have so far been sent to the Gaushalas (cow sanctuaries), Mangla said.

In case their owners stake claim on these cows, they will be charged Rs 5100 as fine and Rs 150 per day for fodder.

He also informed that a scheme is being prepared to make the gau-shalas self-reliant.

He said biogas-based electricity would also be produced in the gaushalas in public-private partnership mode. Apart from this, organic manure and phenyl would be prepared from cow urine.