Chennai: Giving a slip to the police who had placed restrictions at the Marina beach, students on Wednesday staged a flash protest at the mausoleum of J Jayalalithaa against NEET.

Protests were held across Tamil Nadu for the fifth consecutive day by students of private and government colleges and some pro-Tamil outfits against the National Eligibility-cum-Entrance Test.

They raised slogans against the central and state governments and demanded the scrapping of the national entrance test for admission to medical colleges. 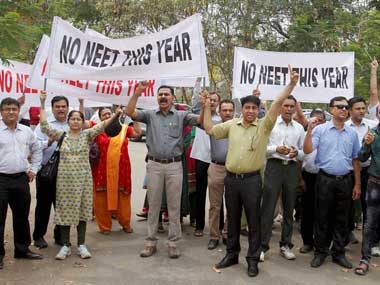 Protests were held in Chennai, Kancheepuram, Cuddalore, Tiruvannamalai, Nagapattinam, Thanjavur, Dindigul and Karur. While a large number of law students participated in the protests at several places, lawyers also took part in demonstrations at some places, including Tiruvotriyur.

Students, who gathered at the mausoleum of Jayalalithaa, squatted there, raised slogans against NEET and demanded justice for Anitha, a Dalit medical aspirant and anti-NEET court petitioner who committed suicide on Friday.

After a tough time handling protesters, the police removed them from the premises and tightened security. Anticipating such protests, the police had placed tough restrictions at the Marina beach to maintain law and order. The beach had earlier this year become the epicentre of protests against the ban on Jallikattu.

Protests had erupted in Tamil Nadu soon after Anitha, daughter of a daily wage earner, allegedly hanged herself at her house in Ariyalur district on 1 September.

She was reportedly upset after reports emerged that Tamil Nadu would not be exempted from the ambit of NEET.

The Supreme Court had last month asked the Tamil Nadu government to start counselling for admissions to MBBS and BDS courses in the state, based on the NEET merit list.