Ludhiana: An unemployed youth threw his shoe allegedly towards Punjab Chief Minister Parkash Singh Badal while he was on the dais during a political conference on Friday at Issru, around 50 kms from Ludhiana, police said. 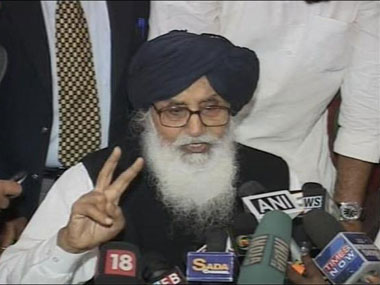 However, the shoe fell a few metres away from the dais.

It was thrown as the Chief Minister stood up to address the gathering.

The youth, identified as Vikram (23), is a resident of Dhanoula in Barnala, Khanna SSP Harsh Bansal said, adding that he also raised slogans against the Chief Minister before hurling the footwear.

He has been taken into custody and is being interrogated, the SSP said.

Commenting on the episode, Badal said he had "forgiven" the youth.

Vikram, however, claimed that he did not hurl the show towards the Chief Minister, but towards his chair on the dias.

"I am angry with all the politicians... they promise employment, but on ground do nothing," the youth said, adding that he was against politicians as "they make false promises".

Political conferences are held at Issru every year on the occasion of martyrdom day of Karnail Singh.

Congress Deputy Leader in Lok Sabha Amarinder Singh strongly condemned the incident, saying no one should be allowed to hurt the dignity of the Chief Minister for any reason.

In a statement issued, Singh said, "I strongly condemn this incident".

The former Chief Minister said this trend of trying to throw shoes at dignitaries must be dealt with firmly according to the law.

"This is no form of protest, but an attempt at cheap publicity by those who try to do it", he said, adding that the trend must be firmly curbed.