A word of advice for Barkha Dutt, Arnab Goswami: Your childish fights makes us want to gag ourselves

Is there something that you have seen or heard in your life that you could not give a toss about? And yet, because it is bouncing around in your face you find you have to say something just in the hope you can get rid of it.

Once we journalists styled ourselves as the watchdogs of the nation. Then, as we sold our souls to the company store, it became a bit of a dog-eat-dog equation. But this unseemly open fight between Arnab Goswami and Barkha Dutt is the absolute pits and a total disgrace to the profession of journalism.

You are both making a mockery of the fourth estate and it is the most shamefully self-indulgent exercise possible. Like Caesar said to Casca the two of you are fat and sleek and rich beyond belief and by some magical waving of fate’s wand your words and the power you wield has you winning fans and supporters.

All of whom you are now letting down.

Instead of setting an example in graceful conduct, you are washing your yucky linen in public and it is a testament to your arrogance that you actually, in corner of your minds, think we, in the world at large, care. 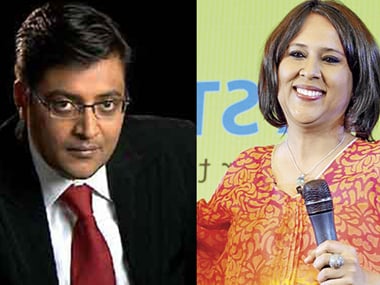 No ,we don’t. We truly do not. But because you are very high profile (and I am beginning to wonder exactly why) and you are engaging in a betrayal of the trust reposed in you, thing is you need to be told to shut up.

You want to continue your fight — get up in the morning and have a duel at dawn. Maybe if the rest of us are struck by good fortune both of you will be struck by each other’s bullets and there will be peace in the valley.

Not in our history have two household names in journalism taken thing to such a low. Oh yes, we had other famous editors who hated each other’s guts but like the Queensbury rules in boxing there was a certain unspoken code of conduct. RK Karanjia of Blitz and DF Karaka of Current had a feud that went on for years but it stayed civil. You didn’t brawl like you were in a bar.

Look at the name-calling you are engaging in and the dismal content of your attacks. Forget about being classy, this is shrewish and infantile and makes most of us in the journalistic field want to gag. You might well ask if it is so unimportant why even bother noticing it. Believe me, if the two of you were shorn of your seats and the access to TV time that you have we’d rather hear a genuine brawl in a fish market.

But unfortunately, you have this profound privilege which you are misusing with hubris and conceit that could well be the first rip on the stairs of success for both of you.

When you slip from the summit and become caricatures and enjoy that standing that fame brings because you think you are larger than life and have this absurd and bloated sense of entitlement the domino principle kicks in. If you don’t stop this nonsense you’ll both be losers.

Falling down the stairs isn't tough.

You will be surprised how quickly anonymity kicks in, she is waiting at the door, eager to switch off the limelight and leave folks like you in the dark.

Who knows maybe it is time...think about it and grow up.