What if Jesus was a woman?

'The Way' written by Kristen Wolf reimagines the story of Jesus with a woman in the central role.

Tokyo: As a child, Kristen Wolf set up a makeshift altar in the driveway of her home, decorating a desk with a white cloth and a crucifix before proceeding to conduct a Mass and causing a stir that resulted in a reprimand.

The move came, she now says, from a sense that she was left outside the centre of Catholic tradition and spirituality by her gender, a feeling that led her decades later to write The Way, a re-imagining of the story of Jesus with a woman in the central role. "As I looked on it, the church leaders could only be male and our God was male, the main player was the Father's only son. The women were mostly in ancillary roles," says the author. Getty Images

"I had a very definite sense, even as a young child, of being somehow excluded from my spiritual experience," Wolf said. "As I looked on it, the church leaders could only be male and our God was male, the main player was the Father's only son. The women were mostly in ancillary roles ... I never felt there was a heroic female."

Decades later, after attending Georgetown University in Washington, DC and studying the Bible and mythology, as well as reading retellings of once-male stories from a female point of view, Wolf thought there was a need for a new take on the Biblical tale of the Messiah.

The result was the story of Anna, a tomboy in ancient Palestine whose androgynous appearance leads to her being disguised as a boy and sold to shepherds. Captured and taught by a group of women who live according to an ancient philosophy, she tries to spread their teachings to ordinary people.

Wolf said that she didn't want to be critical of any religion, but instead sought to tap into one of the major stories still told in modern society — just from a slightly different angle. "The stories need to be dusted off and re-invigorated. My intention was to create a new story that we tell differently, that brings out the timelessness of this story, this person Jesus," she said. "It captures that timelessness but reshapes it so it becomes relevant in our lives again." 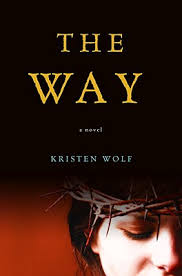 Cover of 'The Way'

The book took some time to be sold to a publisher, but Wolf said she felt that was due at least as much to difficult times in the industry and her own status as a debut novelist. She noted that much of the response since it was launched has been positive.

While there were pleasures and perils involved in retelling such a famous story, she found the overall experience was "thrilling." "You already have, intrinsically, a powerful, moving, evocative story and character that has already stood the test of time. It's as if you're working with a great masterpiece of human emotion," she said. "Which probably also ties into why you're at peril, because you're taking something that is powerful and you are willing to alter it. Your intention is to refresh it but I suppose there's always the risk that you don't."