Reader Debate: How can the govt handle internal security

One of our most commented articles yesterday was Govt vs rest: Civil society, uncivil engagement. We found one of the conversations around this piece interesting and have republished it as "Reader Debates" something that we will do more of. As always we have removed personal attacks that took away from the argument.

wiseman 11 hours ago
Look don't try to lump the soldiers with the Govt, although they may be the face of it, they are just pawns in the game. No one's 'not condemning' the killing of people, be it the villagers or maoists or soldiers. Violence is abhorrent.

The civil society is condemning the way this problem is being dealt with, even sensible people like Nitish Kumar agree that the Govt's policy of going hammer and tongs against it's own people is wrong and amounts to a civil war. 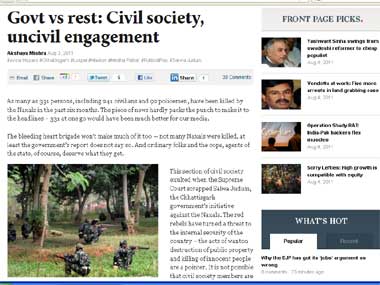 That's the trick any Govt uses when it tries to take away the human rights of a population, it reminds me of one TV show in which Swami Agnivesh was not even allowed to speak and was constantly accused of supporting the Dantewada attack. In the end when he was given 30 seconds he said that he condemns any kind of violence.

Proud_to_be_an_Indian 8 hours ago
And your unjustified liberal views is the reason why problems arise in the first place! So whats your recommendation for solving the issue? Follow the double speak of civil society?

"Khalistan movement died away because the people of Punjab were brought to our side, " Do you forget how the issue was "solved"?

wiseman 8 hours ago
@Proud_to_be_an_Indian
Your misplaced masochism is the reason problems refuse to go away, countries are not kept together by force alone, there is a time and place for everything.

First understand that this is not a secession issue, it's an issue of bad governance. Maoists thrive because tribals support them, and why do tribals support them, because in the name of development the govt is trying to take away their livelihood.
A better approach would be to use targeted hits against Maoists based on Intelligence rather than send the whole battalion against a bunch of tribals and at the same time provide more political power to the tribals by allowing autonomous councils and securing their land rights.

But hey what do I know, Govt knows best right, they have been screwing up for 60 years, let them screw some more.
Khalistan movement died away because the people of Punjab were brought to our side, the problem in Ireland was resolved because people chose peace over violence, if those problems too were resolved using your testosterone loaded methods we would have never seen the end of it.

Proud_to_be_an_Indian 10 hours ago
Ok so how does a government tackle sedition and wanton killings and destruction of property? By being a mute spectator? Would any nation in the world tolerate the actions of such anti national elements?

So if we listen to "sensible" people like Nitish Kumar, the security forces should be removed? What agenda does the civil society have? A Magsaysay award? Or perhaps a few crumbs thrown across by the government?

And how does the state tackle extreme violence - for example blowing up an express train? Yes it certainly should improve the socio-economic conditions. But what about the short term? Allow the terrorists (because that's really what they are) to carry on with their madness and mayhem?