New Delhi: The Delhi Police has been ordered to track mobile phones of people under home quarantine to check their movement and ensure no violations, Chief Minister Arvind Kejriwal said on Wednesday.

He said the decision was made in a meeting with the Lieutenant-Governor Anil Baijal. 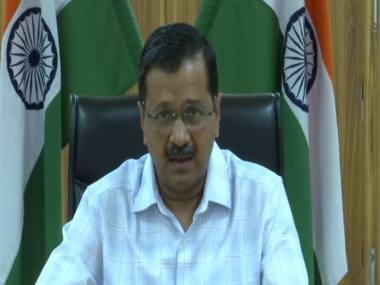 Arvind Kejriwal speaking to the media on Wednesday. ANI

The chief minister said the tracking was being done to ensure people do not violate the quarantine and also identify how many people they contact. He said police will take strict action against those who do not follow the government's orders.

He said the move was inspired by some countries like Singapore, which uses such technology to check the movement of those under quarantine.

On the matter of salaries to people employed in companies, he said, "Passes will be given to two employees/owner of every private company so that they can go to their respective offices to calculate and transfer the employees' salaries."

"Since it is time to give salaries, the accountants in each company will be given two passes for two days," he said while adding that one pass will be for the vehicle and the other for the accountant.

Speaking on providing rations for the poor during the lockdown, he said, "About 10 lakh poor people do not have ration card in Delhi. I request them to apply for the ration card on Delhi government's e-district website. They will not get the card but we will give them ration till the COVID-19 issue persists."

The chief minister also said a total of 120 positive cases for coronavirus have been reported in the national capital till Wednesday morning. He also said that of the total 766 people admitted to the hospitals of Delhi due to Corona, 112 have tested positive and the rest are possibly infected and are being tested.

"Out of the 112 positive cases, only one is on ventilator, two are on oxygen supply and 109 people are stable," he said.

About the Nizamuddin Markaz (Tablighi Jamaat) case he said: "536 people, out of 2346 who were brought out of Markaz, have been admitted to hospitals and 1810 people have been put in isolation/quarantine."

According to the Ministry of Health and Family Welfare, the total number of COVID-19 positive cases has jumped up to 1637 in India, including 1466 active cases, 133 cured/discharged/migrated people and 38 deaths.