Mumbai: With a wave of fast-maturing young players ready to challenge the established greats of the game for Grand Slam honours, Marin Cilic says men’s tennis will be stronger than it has been for a decade when the coronavirus shutdown ends.

While Roger Federer, Novak Djokovic and Rafa Nadal have won the last 13 majors between them Cilic says the likes of Dominic Thiem, Daniil Medvedev, Stefanos Tsitsipas and Alexander Zverev are getting closer to breaking the hegemony. 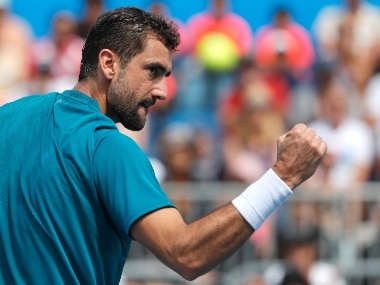 “The health of tennis has grown a lot in the last 12-18 months. This mix of the younger generation, they’re maturing much more,” the former US Open champion told Reuters in an interview from Croatia.

“You now have at least 10 guys that are promising and really strong and they’re showing their strength and their potential on the court and the big tournaments. And there’s also this older generation still.

“I believe health of the tennis tour is extremely strong at the moment. I believe competition has come back to the situation we were in, around 2008-2010, where we had so many great, great names in our sport.”

As well as his 2014 Flushing Meadows triumph, Cilic made the final at Wimbledon in 2017 and the Australian Open the following year — no mean feat in a period boasting the likes of Federer, Nadal, Djokovic, Andy Murray and Stan Wawrinka.

Things were leaner in 2019 when he failed to win a title for the first time since 2007 and the 31-year-old currently languishes at number 37 in the world.

Room at the top

Cilic showed he still has what it takes when, unseeded, he made the Australian Open fourth round this year and says he can climb the ladder again.

“I always believed that there is a place for me at the top of the tennis world and you have to earn it,” added the Croatian, who peaked at number three in the world in 2018.

“I also believe there is still space for me at the top in these next several years — at top 10, top 15 and I believe I can be there.”

His bid to clamber back up the rankings is on hold until the circuit resumes after the coronavirus shutdown, which has seen lower-level professionals, who depend on tournament winnings for their income, struggling to pay the bills.

Cilic, who has banked almost $28 million in career winnings, said the situation was unfair.

“Tennis is one of the biggest, best sports globally but ... basically 100-250 players, are making a living and earning something from it,” said Cilic.

“The governing bodies, especially Grand Slams, need to allocate enough funds to support lower-ranked players, low-level tournaments, futures, challengers and I believe there is enough funds for those too.”

While the shutdown has exposed the financial plight of players in the lower ranks it is also being seen by some as a chance to remedy structural issues within the game, such as the duplication of men’s international team competitions.

The new-look Davis Cup finals and inaugural ATP Cup took place within six weeks of each other around the new year and Cilic, who played a part in both competitions, says fans should be the main consideration when resolving the issues.

“It became such a huge number of tournaments, don’t want to say a mess, but it’s a lot, and difficult to follow for a regular tennis fan, or maybe a fan that watches tennis here and there,” he said.

“There needs to be focus in which way we want the tour to go and how to make the best out of it.”