Rome: Italy’s government on Monday said it would extend its nationwide lockdown measures against a coronavirus outbreak, due to end on Friday, at least until the Easter season in April, as the number of new infections declines.

“The evaluation was to extend all containment measures at least until Easter. The government will move in this direction,” Health Minister Roberto Speranza said in a statement after a meeting of a scientific committee advising the government. 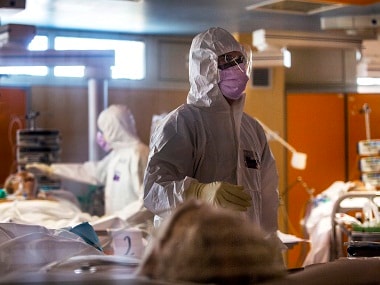 Medical staff at the intensive care unit of the Casalpalocco COVID-19 clinic on the outskirts of Rome. AP

The Health Ministry did not give a date for the new end of the lockdown, but said it would be in a law the government would propose. Easter Sunday is 12 April this year. Italy is predominantly Roman Catholic and contains the Vatican, the heart of the church.

Italians have been under lockdown for three weeks, with most shops, bars and restaurants shut and people forbidden from leaving their homes for all but non-essential needs.

Italy, which is the world’s hardest hit country in terms of number of deaths and accounts for more than a third of all global fatalities, saw its total death tally rise to 11,591 since the outbreak emerged in northern regions on Feb. 21.

The death toll has risen by 812 in the last 24 hours, the Civil Protection Agency said, reversing two days of declines, although the number of new cases rose by just 4,050, the lowest increase since 17 March, reaching a total of 101,739.

However, the decline in the rise of new infections may be partly explained by a reduction in the number of tests, which were the fewest for six days.

The governor of the southern region of Puglia said on Saturday the restrictions should remain in place until May.

Underscoring the dangers of the disease, the national doctors’ association announced the deaths of 11 more doctors on Monday, bringing the total to 61.

Not all of them had been tested for coronavirus before they died, it said, but it linked their deaths to the pandemic.

Lombardy, which contains Italy’s financial capital Milan, accounts for almost 60 percent of the total deaths in Italy and some 40 percent of cases.

Lombardy President Attilio Fontana said the unprecedented curbs on movement, gatherings and business activity were preventing an exponential rise in the number of cases, and needed to be kept in place. “We’re on the right track, we’re maintaining a (chart) line that’s not uphill, but it’s not downhill either,” he said.

The head of the national health institute, Silvio Brusaferro, who is advising the government on how to handle the crisis, also said that for restrictions to be eased “the number of new cases has to fall significantly.”

“For sure the re-opening will happen gradually ... we are even considering the British idea of ‘stop and go’, which envisages opening things for a certain amount of time and then closing them again,” he told the daily La Repubblica.