A religious event held earlier this month in Delhi's Nizamuddin area by the Tablighi Jamaat, a Sunni organisation, sparked off a nationwide search for its attendees with reports emerging from various states of new clusters of coronavirus-affected people linked to the event.

Authorities also launched a search for workers of the religious order and registered a case against the head of the Jamaat with the markaz (centre) emerging as a hotspot of coronavirus. 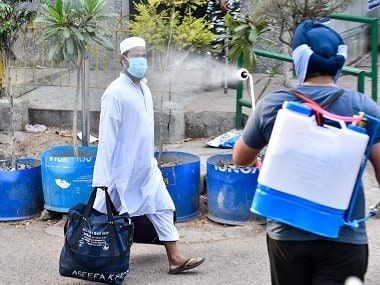 A volunteer sprays disinfectant on a masked man as he leaves the Nizamuddin area. PTI

According to a BBC report, members and workers gathered for the congregation in February but some of the key events were held in early March. However, according to the organisers, many members were stranded at the Alami Markaz Banglewali Masjid or Nizamuddin Masjid Markaz (headquarters of the Jamaat) due to the nationwide lockdown announced on 24 March.

As many residents at the markaz (centre) started showing COVID-19 symptoms on Sunday, police and paramilitary officials locked down the area, amid fears that the disease had spread to other states.

According to a report in The Print, the Tablighi Jamaat is a non-political global Sunni Islamic organisation with its roots in India, started in 1927 by Muhammad Ilyas al-Kandhlawi.

According to the report, the Jamaat mainly works on urging Muslims to return to Sunni Islam, particularly in matters of rituals, attires, and personal behaviour.

Seven deaths linked to event, cases reported in many states

According to reports, thousands took took part in the event and later returned to their homes in virtually every state including Telangana, West Bengal, Karnataka and Gujarat. Many of these states have reported COVID-19 cases linked to the Tablighi Jamaat.

Within the National Capital, more than 1,000 people who attended the congregation have been quarantined while more than 300 have been admitted to hospitals. The government is screening all those who participated in the event, officials said. At least 24 people who took part in the religious congregation have tested positive for the novel coronavirus, Delhi chief minister Arvind Kejriwal said.

Several state governments, including in West Bengal, Assam and Manipur, said they are taking steps to locate participants of the Nizamuddin event.

Karnataka government said 54 people from the state had attended the event, out of which 13 have been identified but they have tested negative for COVID-19.

Gujarat police also launched a probe to identify all the attendees from the state and said primary investigations have revealed that some persons from Bhavnagar had attended the congregation.

The Uttar Pradesh government said 157 people from the state attended the congregation at Nizamuddin, claiming that most of them have been traced.

Additional Chief Secretary (Home) Awanish Awasthi said that "95 percent" of this number have been traced and are being tested for coronavirus. The tests so far have come out negative, he said

A Srinagar-based businessman is being seen as the "super-spreader" in this entire case as he travelled by air, train and road to Delhi, Uttar Pradesh and back to Jammu and Kashmir before he died of COVID-19 on 26 March, raising fears he may have infected many others along the way, officials said on Tuesday.

Six people in Telangana who attended the meeting in the city's Nizamuddin West area also died on Monday, while fifteen more tested positive on Tuesday.

In Madhya Pradesh, chief minister Shivraj Singh Chouhan said 107 people who attended the event have entered the state of which 36 were identified in Bhopal. Bhopal Collector Tarun Pithode said that the 36 people were quarantined and their samples have been sent for testing.

In Andhra Pradesh, officials said more than half of the 40 people who have tested positive for coronavirus in the state were linked to the Nizamuddin event.

In Tamil Nadu, 50 people who attended the gathering at the markaz in Delhi, have tested positive for coronavirus, ANI quoted Tamil Nadu health secretary Beela Rajesh as saying.

The state government also said that out of 1,131 people who returned to the state from Delhi, 515 have been traced while the remaining 616 are asked to self-report.

According to the BBC report, the cluster has even appeared in the distant Andaman and Nicobar Islands, where six of the nine who have tested positive, had returned from the Delhi event.

The Meghalaya Police said that seven members of Shillong markaz of the Tablighi Jamaat who attended the meet have not returned to Meghalaya; five are currently in Delhi and two are in Lucknow. The police of both the states have been notified of their presence, ANI quotes the state police as saying.

The Union Home Ministry said that people from countries like  Indonesia, Malaysia, Thailand, Nepal, Myanmar, Bangladesh, Sri Lanka and Kyrgyzstan attended 'Tablighi' activities this year. So far, 2,137 such people have been identified and are being medically examined and quarantined, while more would be located, the ministry said.

It also said that all state police have been asked to locate Indian Tabligh Jamaat workers from local coordinators, followed by their medical screening and quarantine.

Later in the evening, the ministry said that 1,339 workers of the Tablighi Jamaat organisation have been shifted to Narela, Sultanpuri and Bakkarwala quarantine facilities in Delhi, while some have also been admitted to the LNJP, RGSS, GTB, DDU hospitals and AllMS in Haryana's Jhajjar. Rest of them are being currently medically screened for COVID-19 infections, it said in a statement.

"Usually, all foreigners visiting India as a part of Tablighi team come on tourist visas. MHA had already issued guidelines that they should not indulge in missionary work on a tourist visa. Police will examine and take further action in case of violation of visa conditions," the statement added.

“Talibani Crime” by Tablighi Jamaat”.. This is not a negligence, it’s a “serious criminal act”. When the entire country is fighting united against Corona, such a “sin” is unpardonable. #IndiaFightsCorona

Delhi chief minister Kejriwal also lashed out at the organisers for being "highly irresponsible" on their part to hold such an event at a time when thousands have died in other countries due to the pandemic. The Delhi Government also asked the police to file a case against the organisers.

Strong action should be taken against the administrators of the Nizamuddin Markaz who organised a 3-day religious gathering, with 1000s of people from 13th-15th March, when Delhi Govt orders had expressely forbidden gatherings or more than 200 persons on 13th March itself pic.twitter.com/n0f1rLE5Xx

However, according to reports, the officials have denied any wrongdoings and instead said that they were forced to accommodate visitors who were stranded due to the nationwide lockdown in the premises of the mosque at Nizamuddin.

The organisers also claimed that they informed the local police about the people who continued to be stranded and also cooperated with medical officers who came to inspect the premises.

The mosque, the statement says, "never violated any provision of law, and always tried to act with compassion and reason towards the visitors who came to Delhi from different states. It did not let them violate the medical guidelines by thronging ISBTs (bus stops) or roaming on streets".

Late in the evening, the Delhi Police registered a case against Maulana Saad and others of Tableeghi Jamaat under Epidemic Disease Act 1897 and other sections of IPC for violating government directions given to the management Nizamuddin Markaz regarding restrictions on gatherings, reported India Today, even as the health ministry said it that there was no time for fault finding but the process for containing the spread of the disease had to be taken up.