Coronavirus Outbreak: Cuba’s response to the pandemic is a testament to human solidarity in a global crisis

Last week, the MS Braemar, a transatlantic cruise ship carrying 682 passengers from the United Kingdom, found itself momentarily stranded. Five of the cruise’s passengers had tested positive for the coronavirus. Several dozen more passengers and crew members were in isolation after exhibiting flu-like symptoms.

The ship had been rebuffed from several ports of entry throughout the Caribbean. According to sources in the British government who spoke to CNN, the UK then reached out to both the United States and Cuba “to find a suitable port for the Braemar.”

Which country took them in? If you’ve paid attention to the Trump administration’s xenophobic rhetoric about “the Chinese virus” and its obsession with keeping foreign nationals out of the country, and you know anything about Cuba’s tradition of sending doctors to help with humanitarian crises all around the world, you should be able to guess the answer.

The Braemar docked in the Cuban port of Mariel last Wednesday. Passengers who were healthy enough to travel to their home countries were transported to the airport in Havana. Those who were too sick to fly were offered treatment at Cuban hospitals — even though there had only been ten confirmed cases in the whole country, and allowing patients from the cruise ship to stay threatened to increase the number. 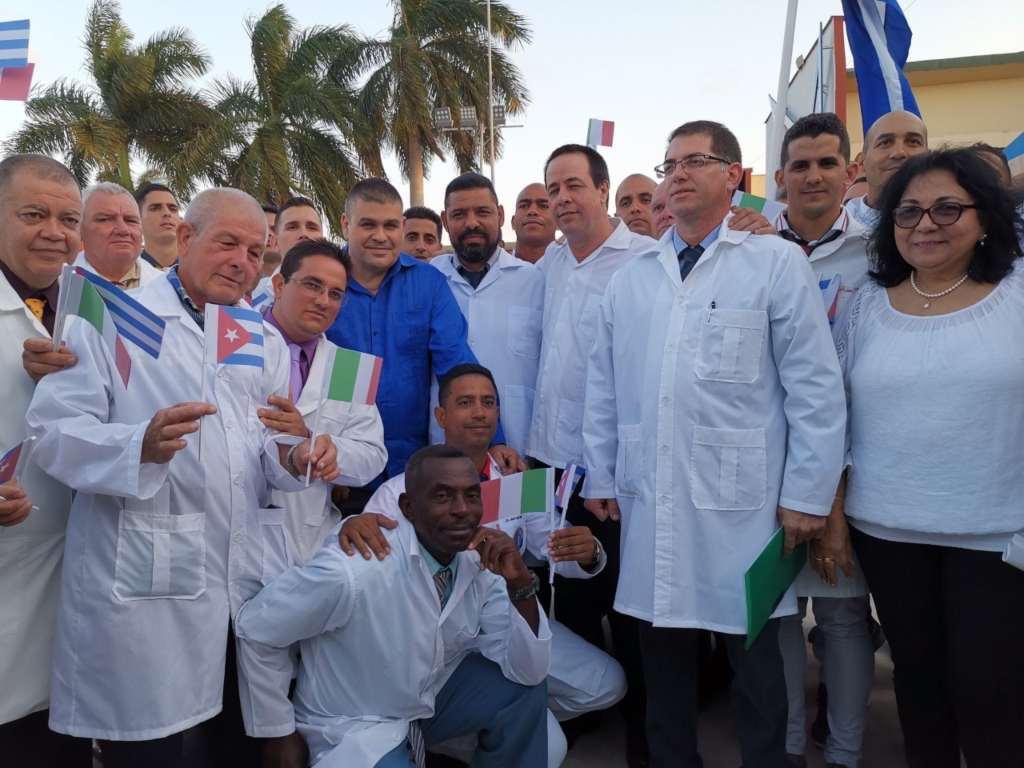 Cuba mobilizes against the virus

Despite being a poor country that often experiences shortages — a product of both the economy’s structural flaws and the effects of sixty years of economic embargo by its largest natural trading partner — Cuba was better positioned than most to deal with the coronavirus pandemic.

The country combines a completely socialized medical system that guarantees health care to all with impressive biotech innovations. A Cuban antiviral drug (Interferon Alfa-2B) has been used to combat the coronavirus both inside the country and in China. Cuba also boasts 8.2 doctors per 1,000 people — well over three times the rate in the United States (2.6) or South Korea (2.4), almost five times as many as China (1.8), and nearly twice as many as Italy (4.1).

On top of its impressive medical system, Cuba has a far better track record of protecting its citizens from emergencies than other poor nations — and even some rich ones. Their “comprehensive, all-hands-on-deck” hurricane-preparedness system, for example, is a marvel, and the numbers speak for themselves. In 2016, Hurricane Matthew killed dozens of Americans and hundreds of Haitians. Not a single Cuban died. Fleeing residents were even able to bring their household pets with them — veterinarians were stationed at the evacuation centers.

The coronavirus will be a harder challenge than a hurricane, but Cuba has been applying the same “all-hands-on-deck” spirit to prepare. Tourism has been shut down (a particularly painful sacrifice, given the industry’s importance to Cuba’s beleaguered economy). And the nationalized health care industry has not only made sure that thousands of civilian hospitals are at the ready for coronavirus patients, but that several military hospitals are open for civilian use as well.

Masks: A tale of two countries

In the United States, the surgeon general and other authorities tried to conserve face masks for medical professionals by telling the public that the masks "wouldn’t help." The problem, as Dr Zeynep Tufekci argued in a recent New York Times op-ed, is that the idea that doctors and nurses needed the masks undermined the claim that they would be ineffective. Authorities correctly pointed out that masks would be useless (or even do more harm than good) if not used correctly, but as Tufekci notes, this messaging never really made sense. Why not launch an aggressive educational campaign to promote the dos and don’ts of proper mask usage rather than telling people they’d never be able to figure it out?

Many people also wash their hands wrong, but we don’t respond to that by telling them not to bother. Instead, we provide instructions; we post signs in bathrooms; we help people sing songs that time their hand-washing. Telling people they can’t possibly figure out how to wear a mask properly isn’t a winning message. Besides, when you tell people that something works only if done right, they think they will be the person who does it right, even if everyone else doesn’t.

The predictable result of all of this is that, after weeks of “don’t buy masks, they won’t work for you” messaging, so many have been purchased that you can’t find a mask for sale anywhere in the United States outside of a few on Amazon for absurdly gouged prices.

In Cuba, on the other hand, nationalized factories that normally churn out school uniforms and other non-medical items have been repurposed to dramatically increase the supply of masks.

The same humanitarian and internationalist spirit that led Cuba to allow the Braemar to dock has also led the tiny country to send doctors to assist Haiti after that nation’s devastating 2010 earthquake, fight Ebola in West Africa in 2014, and, most recently, help Italy’s overwhelmed health system amid the coronavirus pandemic. (Cuba offered to send similar assistance to the United States after Hurricane Katrina ravaged the Gulf Coast, but was predictably rebuffed by the Bush administration.)

Even outside of temporary emergencies, Cuba has long dispatched doctors to work in poor countries with shortages of medical care. In Brazil, Cuban doctors were warmly welcomed for years by the ruling Workers’ Party. That began to change with the ascendance of far-right demagogue Jair Bolsonaro. When he assumed office, Bolsonaro expelled most of the Cuban doctors from the country, insisting that they were in Brazil not to heal the sick but “to create guerrilla cells and indoctrinate people.”

As recently as two weeks ago, Bolsonaro was calling the idea that the coronavirus posed a serious threat to public health a “fantasy.” Now that reality has set in, he’s begging the Cuban doctors to come back.

Last month, Bernie Sanders was red-baited and slandered by both Republicans and establishment Democrats for acknowledging the real accomplishments of the Cuban Revolution. It didn’t seem to matter to these critics that Sanders started and ended his comments by calling the Cuban government “authoritarian” and condemning it for keeping political prisoners. Instead, they seemed to judge his comments by what I called the “Narnia Standard.” Rather than frankly discussing both the positive and negative aspects of Cuban society, the island state is treated as if it lacks any redeeming features — like Narnia before Aslan, where it was “always winter and never Christmas.”

Democratic socialists value free speech, press freedom, multiparty elections, and workplace democracy. We can and should criticize Cuba’s model of social organization for its deficits. But Cuba’s admirably humane and solidaristic approach to the coronavirus should humble those who insist on talking about the island nation as if it were some unending nightmare.

Ben Burgis is a philosophy professor and the author of Give Them An Argument: Logic for the Left. He does a segment called "The Debunk" every week on The Michael Brooks Show. He tweets at @BenBurgis

This story is republished with permission from the author from Jacobin. Read the original story here.