Coronavirus Outbreak: Bundesliga future still in the air despite teams returning to training

Berlin: With football teams in Germany resuming training in small groups this week, there is optimism among some that the Bundesliga will be able to resume in May.

Such hopes appear slim, however, with the coronavirus outbreak still not under control. 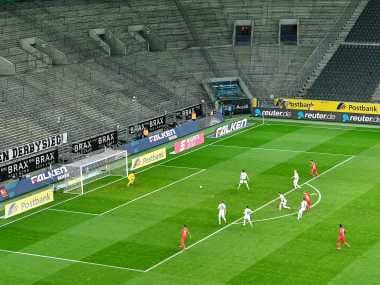 Players in an empty stadium during Borussia Moenchengladbach vs Cologne. AP

"It is clear that wherever people come into close contact with each other, at major events such as football games, or in clubs, it will take a long time before normality returns," Health Minister Jens Spahn said in an interview with the daily Handelsblatt on Thursday.

The country's top two divisions have been suspended through April. The last match was played on 11 March.

The 36 clubs from the two divisions agreed on 31 March that they want to complete the season by the end of June, almost certainly without fans present and with a minimal workforce in a bid to prevent any further outbreaks of the virus. But any decisions to return are not for the clubs to make, forcing them to adopt a wait-and-see approach.

"So far there have been a lot of considerations and thoughts, but no concrete plans for the resumption of Bundesliga games," Union Berlin spokesman Christian Arbeit told The Associated Press on Thursday.

Germany was the last of the five major leagues in Europe to suspend play. The decision was forced on football officials as some players contracted the virus before the 26th round could begin.

That round had been due to go ahead without fans in stadiums. However, in the only German game played without supporters on 11 March, hundreds assembled outside the stadium for the derby match between Borussia Mönchengladbach and Cologne, defeating the purpose of stopping large gatherings of people.

State politicians and health officials will determine when, how and even if the Bundesliga can resume to complete the rest of the season.

Germany has registered more than 113,000 confirmed cases of COVID-19 and attributed almost 2,350 deaths to the disease.

The country has shut schools, bars, most shops and banned gatherings of more than two people in public with the restrictions through at least 19 April.

German Chancellor Angela Merkel warned on Thursday that the situation is "fragile" and that "we could very, very quickly destroy what we have achieved."

Merkel is due to discuss the way forward with governors of the country's 16 states next Wednesday, but officials so far have been reluctant to discuss details of a possible exit strategy. They have made clear that any return to normality will be gradual and phased.

"Developments in the weeks ahead will be shaped by external factors such as the spread of the virus and the political response," the German football league said in a statement.

There are 163 games to be played in the top two divisions to complete the season. The clubs are to meet again to discuss the situation on 17 April.

"All of those who make predictions about a possible start of games are charlatans. All charlatans," former Bayern Munich president Uli Hoeneß told Kicker magazine on 26 March. "Nobody knows exactly how long it will take."