The coronavirus has claimed many lives around the world and people have had to live in locked down societies. The worst impact of this virus outbreak has been on the marginalised; those who are not only at risk of getting exposed to the virus but also have to bear the burden of lapses in state policy.

In India, among all the states, it is important to talk about Bihar because labourers from this region are among the most widespread migrant populations in the country. The state's economy is not in good condition and at the same time, it also tops in the list of states measured on multidimensional poverty index. Due to this weak economy, the underprivileged of Bihar have suffered from an inept healthcare system, education and employment policy for decades. While their list of worries is long, the most serious issue for people in Bihar at the moment is related to health and nutrition.

Official figures show that within a span of few months in 2019, more than 160 children died in Bihar due to Acute Encephalitis Syndrome (AES). The first death of the year 2020 due to the disease has been recorded in the month of March itself. One should keep this in mind that these are official figures and according to them, Bihar is better than the rest of the states on 'Corona Indicator'. However, one should be careful in arriving at this conclusion.

When it comes to health, Bihar's performance is deteriorating every year. Bihar tops the list of states in the number of deaths of children under five years due to malnutrition.

While Jharkhand (48 percent), followed by Bihar (44 percent), has the lowest average weight of children, Bihar has the highest percentage of stunted children (48 percent). The country-wise average is 38 percent.

Year after year, Bihar has been at the bottom of health indicators for not only children but of people of all ages. And despite being in such a situation, in 2019-20, the Bihar government used only 50 percent of the approximately Rs 3,300 crore received under the National Health Mission from the Center.

When it comes to health, the question also arises of nutrition. Ration cuts and exclusions from PDS are also an important issue, although these leakages have reduced significantly compared to the last decade. But in the present condition, it would be a big mistake to just leave the poor dependent on ration cards. The people of the Mahadalit community of Bihar are still not able to take the benefit of such policies due to their exclusion.

In light of these issues, the importance of government intervention related to ration-health-employment-education of the state government increases further. The first AES case in the state came up in 1994, and since then, children have been dying every year due to government negligence. According to government data, eight children died of AES in 2018, while seven lost their lives in 2017, four in 2016 and nine in 2105. In the year 2014, the sate recorded 99 deaths, 39 deaths were reported in 2013 and 120 died of AES in 2012.

Every year children have been paying the price for this neglect with their lives. Despite decades of Bihar receiving funding from the Central Government, the state continues to have the worst performance in improving improve the health prospects of newborns, women and other parameters.

The question arises as to why the government continues to fail in this matter and why there is no accountability despite having a regional party in power.

In 2012-13, under an ambitious Randomised Controlled Trial (RCT), an experiment was conducted to address the delay in payment of NREGA workers in Bihar. NREGA workers are entitled to payment within 15 days according to the law. However, the result was the opposite ⁠— there was much delay in the payment of wages. What is striking is that the researchers who conducted the trial did not mention the delay in payments anywhere in the paper they presented to showcase results. The  state government and the research team conducted the experiment together.

The above data-point does not reflect the discrimination and backwardness associated with Bahujans (Dalits, Backward Castes and religious minorities) in Bihar. In Madhepura, a region hit by the Kosi floods of 2008, a doctor wrote on his experience with Mushar children in a report — "...clearly, the children were acutely and severely malnourished. Despite vaccination, there was not enough protein for antibodies to the measles infection in their bodies. Measles infection and a sudden drop in the already low immunity of children made them vulnerable to common childhood diseases like diarrhea and pneumonia".

According to a report published in Science Direct Journal, more than 120 children killed because of AES in 2019 were from Bahujan families.

The most frightening situation in the health question is that of the Dalits and people belonging to backward classes in Bihar because along with a poor system, they also have to face caste-based discrimination. 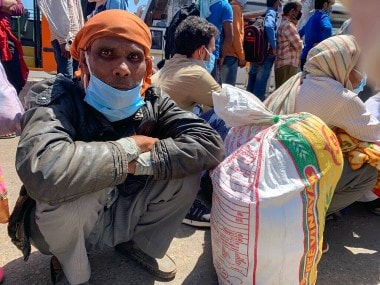 Sanjay Sahini, who runs an NREGA workers' organisation in Muzaffarpur district of Bihar, says that the workers who have ration cards in the state will be able to sustain themselves for a few days, but after that, they will be left with nothing. And the condition of the labourers from Bihar who are trapped in other cities is such that if the organisation does not help them, then they will be left hungry.

More than 88 percent of the Bihari population live in rural areas. It is not that caste discrimination does not exist in the cities, but in the rural areas, the years-old frustrated system is still alive and in such a situation terrible incidents can happen to Bahujans, especially the Dalits.

The most urgent need of the hour is to provide ration and cooked food to the people of rural areas with the help of government intervention and also to ensure that people belonging to the weaker sections do not become victims of discrimination and violence, and no one should lose their life because of lack of information.

The author is a research associate at IFMR LEAD at Krea University; the article was translated from Hindi to English by Tejaswini Tabhane