Coronavirus Outbreak: 100 years later, we are staring at another pandemic, with masks on and no vaccine in sight

In the years between two lethal pandemics, one the misnamed Spanish flu, the other COVID-19, the world learned about viruses, cured various diseases, made effective vaccines, developed instant communications and created elaborate public-health networks.

Yet here we are again, face-masked to the max. And still unable to crush an insidious yet avoidable infectious disease before hundreds of thousands die from it.

As in 1918, people are again hearing hollow assurances at odds with the reality of hospitals and morgues filling up and bank accounts draining. The ancient common sense of quarantining is back. So is quackery: Rub raw onions on your chest, they said in 1918. How about disinfectant in your veins now? mused President Donald Trump, drawing gasps instead of laughs over what he weakly tried to pass off as a joke. In this March 24, 2020, photo, Serbian soldiers set up beds for treatment of possible COVID-19 infected patients inside of the Belgrade Fair, Serbia. In the ex-communist Europe and elsewhere, rulers are assuming more power while they introduce harsh measures they say are necessary to halt coronavirus spread. (AP Photo/Darko Vojinovic)

In 1918, no one had a vaccine, treatment or cure for the great flu pandemic as it ravaged the world and killed more than 50 million people. No one has any of that for the coronavirus, either.

Modern science quickly identified today’s new coronavirus, mapped its genetic code and developed a diagnostic test, tapping knowledge no one had in 1918. That has given people more of a fighting chance to stay out of harm’s way, at least in countries that deployed tests quickly, which the US didn’t.

But the ways to avoid getting sick and what to do when sick are little changed. The failure of US presidents to take the threat seriously from the start also joins past to present.

Trump all but declared victory before infection took root in his country and he’s delivered a stream of misinformation ever since. President Woodrow Wilson’s principal failure was his silence.

Not once, historians say, did Wilson publicly speak about a disease that was killing Americans grotesquely and in huge numbers, even though he contracted it himself and was never the same after. Wilson fixated on America’s parallel fight in World War I like “a dog with a bone,” says John M. Barry, author of “The Great Influenza.”

The suspected ground zero of the Spanish flu ranges from Kansas to China. But it was clear to US officials even in 1918 that it didn’t start in Spain.

The pandemic took on Spain’s name only because its free press ambitiously reported the devastation in the disease’s early 1918 wave while government officials and a complicit press in countries at war — the US among them — played it down in a time of jingoism, censorship and denial.

Like COVID-19, the 1918 pandemic came from a respiratory virus that jumped from animals to people, was transmitted the same way, and had similar pathology, Barry said by email. Social distancing, hand-washing and masks were leading control measures then and now.

Medical advice from then also resonates today: “If you get it, stay at home, rest in bed, keep warm, drink hot drinks and stay quiet until the symptoms are passed,” said Dr John Dill Robertson, Chicago health commissioner in 1918. “Then continue to be careful, for the greatest danger is from pneumonia or some kindred disease after the influenza is gone.”

In the manner of the day, there just had to be a catchy rhyme in circulation, too: “Cover-up each cough and sneeze. If you don’t you’ll spread disease.”

But there were also marked differences between the viruses of 1918 and 2020. The Spanish flu was particularly dangerous to healthy people aged 20 to 40 — the prime generation of military service — paradoxically because of their vibrant immune systems.

When such people got infected, their antibodies went after the virus-like soldiers spilling from the trenches of Europe’s killing fields. 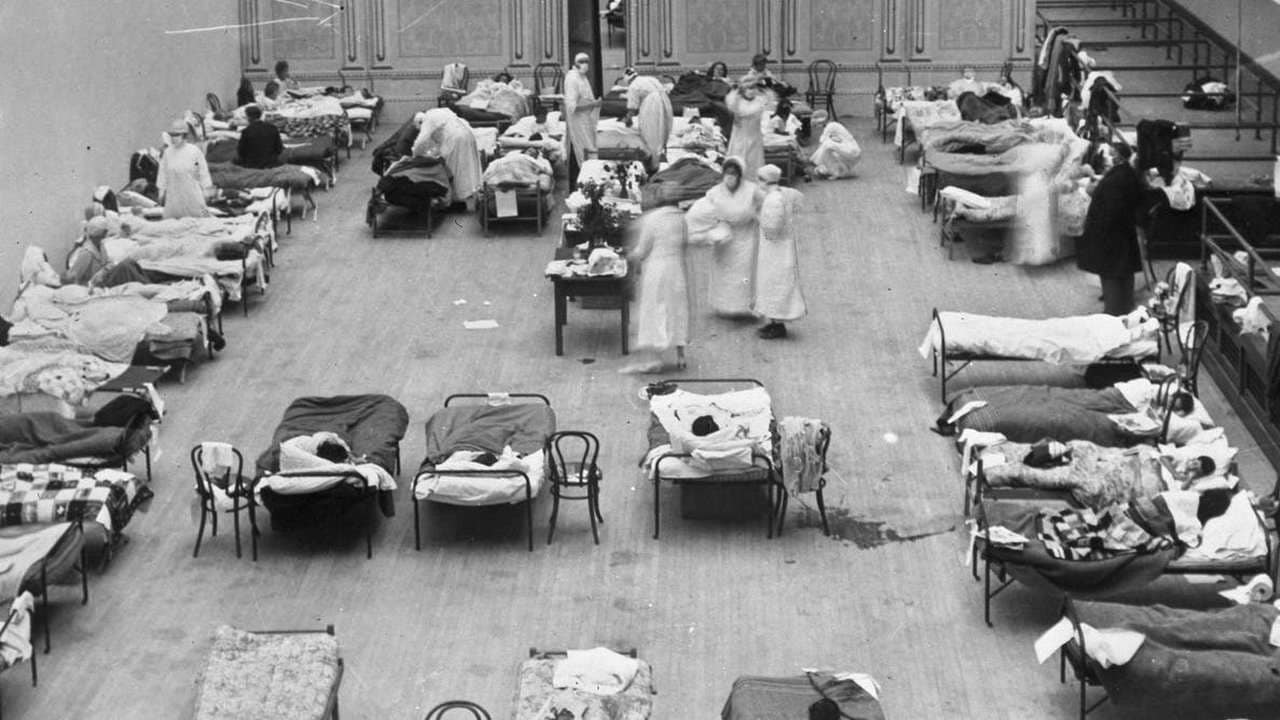 It’s a matter of scale. Image credit: Edward A. "Doc" Rogers/Library of Congress via AP

“The immune system was throwing every weapon it had at the virus,” Barry said. “The battlefield was the lung. The lung was being destroyed in that battle.”

Young soldiers and sailors massed at military camps in the US sailed for Europe on ships stuffed to the gunwales with humanity, fought side by side in the trenches and came home in victory to adoring crowds. The toll was enormous, on them and the people they infected. The Spanish flu could just as easily have been called the US Army or US Navy flu instead. Or the German or British flu, for that matter.

Among those who died in the pandemic was Friedrich Trump, Donald Trump’s paternal grandfather. Among those who contracted it and recovered were the wartime leaders of Britain and Germany as well as of the United States, British and Spanish kings and the future US president, Franklin Roosevelt, when he was assistant Navy secretary.

But the toll was heavier on average people and the poor, crowded in tenements, street cars and sweaty factories.

They could not all live by the words of the 1918 US surgeon general, Rupert Blue: “Keep out of crowds and stuffy places as much as possible. ... The value of fresh air through open windows cannot be overemphasized. ... Make every possible effort to breath as much pure air as possible.”

An estimated 675,000 Americans died in the pandemic, which is thought to have infected one-third of the global population. Tracking by Johns Hopkins University shows the continuing COVID-19 pandemic has killed more than 250,000 people globally, more than 68,000 in the United States.

In 1918, the surgeon general noted in a handbill that “a person who has only a mild attack of the disease himself may give a very severe attack to others.” The warning is just as applicable to the coronavirus, especially as scientists learned large numbers of people with COVID-19 may spread it despite no obvious symptoms. Exactly how often the new virus kills can’t be determined without better counts of the infected; some estimates put the 1918 flu’s death rate at 2.5 percent.

Blue’s public notice also warned people to avoid charlatans and only get medicine from doctors.

Physicians, though, didn’t always know what they were doing. Medical journals at the time describe a rash of unusual treatments, some in the league of Trump’s amateur theories about disinfectant, blasts of lights and an unapproved drug that has both potential benefits and risks. 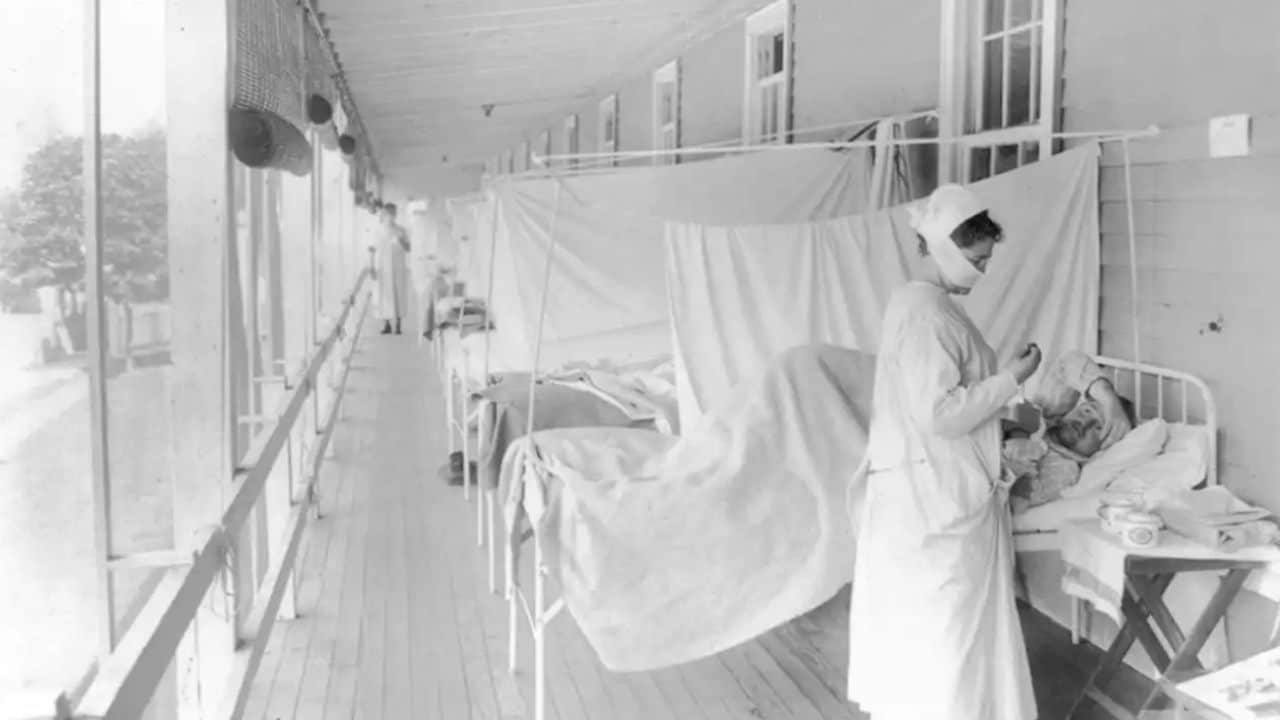 In this November 1918 photo made available by the Library of Congress, a nurse takes the pulse of a patient in the influenza ward of the Walter Reed hospital in Washington. Image credit: Harris & Ewing/Library of Congress via AP, File

One 1918-era doctor recommended that people sniff a boric acid and sodium bicarbonate (baking soda) powder to rinse out nasal passages. Others prescribed quinine, strychnine and a poisonous garden plant called Digitalis to help circulation, as well as drugs derived from iodine for “internal disinfection,” according to Laura Spinney, who wrote the 2017 book “Pale Rider: The Spanish Flu of 1918 and How it Changed the World.”

Popular theories spread that warming your feet would prevent infection, or gobbling brown sugar, or getting the onion rubdown. A “clean heart” was one supposed preventive, though it is not clear whether that meant the organ or the heart of love.

“There was no Tony Fauci back then,” Barry said in a remote Library of Congress interview in April.

We have Fauci now — a federal immunologist who has been regarded as the truth-teller in White House briefings, singularly immune to Trump’s positive spin and falsehoods. Plus, we know so much more than people did in 1918.

Conspiracy theorists have blamed COVID-19 on the development of 5G networks, just as they say radio waves caused the 1918 flu. Arsonists recently torched more than a dozen British cell towers after that falsehood circulated.

Over the months of this pandemic, The Associated Press has debunked a series of bogus remedies that spread on Facebook, Twitter and the like. No, blasting hot air up your nose from a hairdryer won’t protect you. Nor will drinking tonic water, eating high-alkaline foods, stuffing antibiotic ointment up your nose, downing vodka or any home elixir.

No, it’s not true that if you can’t hold your breath very long, you have COVID-19. Or that a vaccine from a lab only works on a disease created by a lab.

Social distancing has not come with social-media distancing. Over a century of science, we haven’t gone back to the future, but ahead to the past.

In September 1918, as the Spanish flu’s second and by far deadliest wave hit in the US, Philadelphia’s public health chief disregarded advisers and let a massive war-bond parade proceed through downtown. The H1N1 virus raced through the masses in what has been called the world’s deadliest parade. As officials insisted there was nothing to be alarmed about, people were seeing neighbours sicken and die with astonishing speed and mass graves being dug.

“It’s just the flu” had worn thin as the mantra of officialdom.

Late that November, sirens wailed in San Francisco to sound the all-clear after six weeks of lockdown and tell people they could remove their masks. San Francisco, like many cities in the West, had been largely spared the first wave and spent the interval preparing for Round 2, mandating masks and jailing people who didn’t comply.

They had a rhyme for that, too, of course: “Obey the laws and wear the gauze. Protect your jaws from septic paws.” The precautions paid off with a death rate lower than in afflicted cities elsewhere. But the city relaxed too soon.

In December, thousands of new cases erupted. A wave spilling into the new year was underway. San Francisco’s death toll mounted by more than 1,000. It was the last lashing by the Spanish flu, and a less-lethal one.

The brutal lessons of 1918 and 1919? To Barry, who has enlisted 15 years ago in a Bush administration drive to prepare all levels of government for pandemics, they are to respond early, relax cautiously, tell people the truth.

Instead, he has seen denial followed by a chaotic federal response and leadership vacuum as Washington and the states compete for the same medical essentials and now moves fitfully toward reopening.

“Now we have plans, even war-gamed the plans, spent billions preparing for just what is happening, federal agencies have been tasked to handle all these things, and we get ... next to nothing,” he said.

Not even a jingle.