Samoa leaps ahead in time, cuts a day off its calendar

CANBERRA: New Year's Day will come early in Samoa after the tiny South Pacific nation cut Friday, December 30, from its 2011 calendar so it can catch up with Asia, New Zealand and Australia, ending 120 years of its time alliance with the United States.

The country of about 180,000 people will jump to the west of the international dateline, which runs zig-zags through the Pacific Ocean and broadly follows the 180 degree line of longitude. Samoa's Prime Minister Tuilaepa Sailele Malielegaoi said the change would make it easier for Samoa to do business with key trade partners, ending the need for many to work on Sundays. 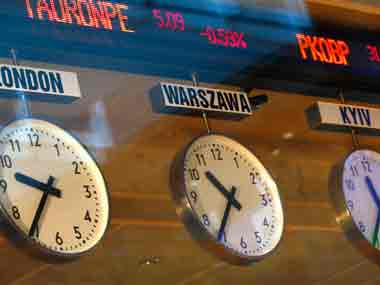 Samoa has cut off 30 December from its 2011 calendar: Reuters

"No longer shall we have people ringing us up on Monday from New Zealand and Australia thinking it is Monday when we are closing our eyes and praying at churches. And vice versa on our Fridays when we ring up and already our contacts are holidaying on their Saturdays," he told Radio New Zealand on Friday.

"It will remove the enormous amount of confusion in our travel times for the Samoans and especially for the tourists who come to Samoa, who keep thinking of the New Zealand and Australian time zones."

Church bells will ring and carol services will herald the changeover time at midnight on Thursday, when clocks will tick straight into Saturday morning. "I think the people are pretty calm about it, they are not expecting to have any major changes," said Samoa Observer newspaper editor Savea Sano Malifa.

To help win public support, the government declared employers must still pay workers for the missing Friday, although banks will not be allowed to charge interest for the lost day.

Countries are free to choose whether the dateline passes to the east or west, and Samoa's decision will mean all new maps will need to change.

But some tourism operators are worried Samoa will lose business by losing its position as the last place on earth to see the sunset each day, although it will now be one of the first places to see in each new day.

The nation's seventh Day Adventists are also divided over the change, and whether they should now observe the Sabbath on Saturday or Sunday. The small former New Zealand dependency Tokelau, which has its administration in Samoa's capital Apia, is also changing datelines, while nearby American Samoa will continue to be on the other side of the dateline and will be a day behind.

Samoa, a country of about 180,000 people, used to be same time zone as New Zealand and Australia but went back a day in 1892, celebrating July 4 twice and aligning itself with the United States.

The date change is not the first major change in Samoa in recent years. In 2009, the country switched to driving on the left hand side of the road from the right hand side, in line with New Zealand and Australia.