Browne to take over as Air Force chief on Sunday

A fighter pilot with a varied operational experience on all kinds of aircraft including Hunters, all variants of the MiG 21s, Jaguars and Sukhoi-30, Browne has logged about 3,100 hours of flying. 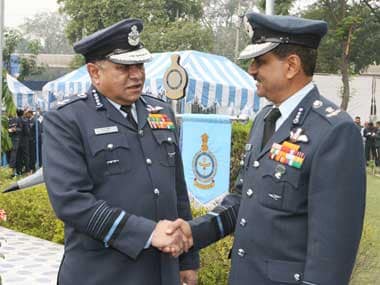 An alumnus of the National Defence Academy, he has served as an instructor at the Tactics and Air Combat Development Establishment and the tri-services Defence Services Staff College in Wellington.

A graduate of the Air Command and Staff College at Albama in the United States, the officer nick-named 'Charlie Browne' in Air Force circles, trained with the Royal Air Force in the United Kingdom on Jaguar aircraft and later commanded a Jaguar squadron.

During his 39 years with the IAF, he has held various operational and staff appointments that include Joint Director at the Air War Strategy Cell at the Air Headquarters, Chief Operations Officer and Air Officer Commanding of a SU-30 base, Air-I at the Western Air Command (WAC) and Assistant Chief of the Air Staff (Intelligence) at the Air Headquarters.

In April 1997, he established the Indian Defence Wing in Tel Aviv and served as the Defence Attache till July 2000. Between 2007 and 2009, as the Deputy Chief of the Air Staff at the Air Headquarters, he oversaw lAF's major modernisation programmes.

Before moving in as Vice-Chief of the Air Staff in the Air Headquarters, he headed the WAC.

He is married to Kiran Browne. They have a son, Omar, who is a fighter pilot in the IAF, and daughter Alisha, who works for a multinational company.