Follow the live scorecard and ball-by-ball commentary on the final day of the second Test between Zimbabwe and Sri Lanka at the Harare Sports Club on our live blog here.

Day 4 report: Zimbabwe stretched its lead over Sri Lanka to 354 runs on a rain-affected fourth day on Thursday as it seeks a series-levelling win in the second Test. 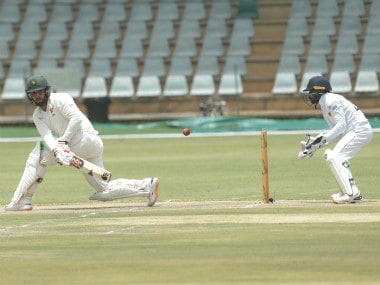 Zimbabwe, having lost two hours of play due to the weather, has just one more day to bowl the Sri Lankans out and pull off what would be a rare Test victory.

Zimbabwe reached stumps on 241-7 in its second innings at Harare Sports Club, with new captain Sean Williams 47 not out to go with his century in the first innings.

Resuming on 62-1, Zimbabwe’s second innings was anchored by former captain Brendan Taylor’s aggressive half-century. He made 67 off 75 balls. Taylor hammered eight fours and a six in an effort to grow Zimbabwe's lead quickly before he was trapped lbw by Sri Lanka fast bowler Lahiru Kumara.

Taylor has scored half-centuries in both innings in the Test. Zimbabwe could declare overnight and put Sri Lanka in first thing on the final day.

After Taylor went, Williams and allrounder Sikandar Raza (34) put on a 70-run sixth-wicket stand. Fernando (2-43) and spinner Lasith Embuldeniya (2-81) were the pick of the bowlers for Sri Lanka.

Zimbabwe made 406 batting first and moved into the strong position on the third day on Wednesday after bowling Sri Lanka out for just 293, with Raza taking a career-best 7-113.

That gave the home team the chance to draw the two-Test series. Sri Lanka won the first Test, also in Harare, by 10 wickets.

Victory would be a major achievement for Zimbabwe. The team has constantly been affected by off-field issues in recent years. Zimbabwe was banned from international cricket for a period last year because of government interference in the running of the national cricket body.

Zimbabwe won a Test against Bangladesh to draw its last series just over a year ago but hadn't won a Test in five years before that.