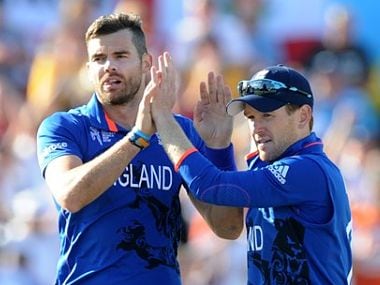 World Cup, Eng vs Bang as it happened: Bangladesh knock England out

That's it from us. Thanks for following along. Ciao.

That is it from us. Fantastic win for Bangladesh. One they will remember for years to come. They held their nerve at crucial moments while England did not.

Who knows where England go from here. They are a terrible one-day side and despite the results, don't think they need to change anything. If Ireland makes the quarter-finals, there will be more egg on the ICC's face, not to mention the ECB's.

Mashrafe Mortaza: Feel proud. Special thanks to the team management and coaching staff and obviously the boys. I think we had to bowl well. Our start wasn’t that good but in the middle we bowled well and put the pressure on England

Mahmudullah showed his guts and Mushfiqur was brilliant. I have to say Rubel’s name. He got four wickets, very crucial wickets.

I think Tamim feels really bad (for the drop) but it happens in cricket. Any of the day, winning side so we are very happy. It is amazing. This win is for all Bangladesh. The peop[le who work hard every day but still support us day in and day out, this is for you guys.

Eoin Morgan: Pretty poor to be knocked out of a World Cup this early. At half-tome, the guys bowled well and the Bangladeshi guys batted well but with the short boundaries, well within our reach. We bowled reasonably well. I am gutted at the moment. We struggled to find a way since we arrived here. The changes we made at the start of the tournament were necessary. The two we made today were again necessary.

I don't think [England is too obsessed with stats and lack flair]. We did not perform as a unit. Since we landed in Australia, we tried to address that but we have not been able to.

I have no idea what happens from here. Ultimately, we have not performed.

Mahmudullah is the Player of the Match for his century.

Mahmudullah: Really impressed by the attitude of our boys. All the boys chipped in and everything went well. Mushy and I had a good partnership. Thinking we were 15 to 20 runs short. If we get early wickets, then we are in. Back home it is really special. Thanks to all the fans for supporting us here. Tamim one of the best fielders in our team. Catch can be dropped in match. The way we came back especially the last two balls, very special.

I CANNOT BELIVE THIS! I JUST CANNOT! But, well done Bangladesh! You deserved it! #ENGvBAN

WICKET!!! Hales is gone. Mortaza gets the wicket with a nice outswinger. Hales ducked down in his stance but big wicket for Bangladesh.

England face a potential banana skin when Eoin Morgan's beleaguered side play Bangladesh in a make-or-break World Cup clash in Adelaide on Monday.

England lost to Bangladesh by two wickets in the last World Cup in 2011 -- a match in which Morgan made 63 -- but still survived the shock defeat to qualify for the quarter-finals.

There will, however, be no second chance this time as England, with one win in four matches, must beat both Bangladesh at the Adelaide Oval and Afghanistan in Sydney on March 13 to stay in contention for the last eight.

Even that may not be enough if Bangladesh, who have five points to England's two, upset co-hosts New Zealand in Hamilton on March 13 to squeak through to the quarter-finals from Pool A. Morgan will be expected to lead from the front but the gifted left-hander had scored just two half-centuries in 16 World Cup matches so far, nine of them playing for Ireland in 2007.

England have been defeated by Bangladesh just twice in 15 one-day internationals, but a woeful World Cup record over the last 20 years will have even their most optimistic supporters worried.

England's lone win this time has been against minnows Scotland, but their most embarrassing moment came last Sunday when Sri Lanka chased down what seemed a reasonably challenging target of 310 with nine wickets and 16 deliveries to spare.

In 2011, England had all but wrapped up the match in Chittagong when Bangladesh's ninth-wicket pair of Mohammad Mahmudullah and Shafiul Islam put on 58 off 56 balls to seal victory with six balls remaining.

There has been a hundred each in the current tournament from Moeen Ali against Scotland and Joe Root in a losing cause against Sri Lanka, but just two other England batsmen have scored half-centuries.

Morgan himself has managed just 90 runs at an average of 22.50, but his biggest worry will be the ineffectiveness of his two pace spearheads James Anderson and Stuart Broad.

Anderson's two wickets so far have come at an unusually high average of 91, while Broad averages 92 for his two wickets.

"We certainly are not taking a win for granted," said Morgan of Monday's game. "Bangladesh have come a long way in the last 10 years.

"If we play well, I have every confidence we can win this game. The illusion of making it a bigger game than it is, is probably the wrong thing to do."

Bangladesh, meanwhile, have ensured that sharing points with co-hosts Australia in the rained-off match in Brisbane has not been wasted.

Having beaten Afghanistan before losing to Sri Lanka, Bangladesh came up with what skipper Mashrafe Mortaza described as their "best" run chase when they overhauled Scotland's 318 for eight with 11 balls to spare for the lost of just four wickets.

It was the second-best winning chase in World Cup history following Ireland's 329 to defeat England in a Bangalore thriller four years ago.

Bangladesh will be without batsman Anamul Haque, who was ruled out for the rest of the tournament due to a dislocated shoulder and has been replaced by the experienced Imrul Kayes.

Mortaza said the Tigers, who have made it past the first round just once in the World Cup, are keyed up for Monday's day/night game.

"That win over Scotland has given us a lot of confidence," he said. "The whole team is very excited about this England game."