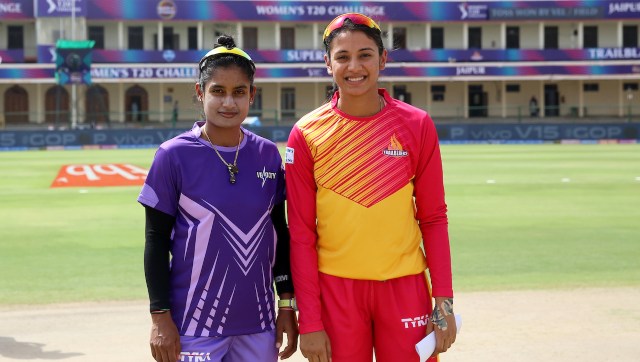 Velocity have been outplayed in all departments of the game. Trailblazers were dominant right from the word go. They dismissed Velocity for a below-par total of 47 and got past the finish line in just 7.5 overs. Sophie Ecclestone showed her class once again and proved why is she is one of the top bowlers in the women's game. Deandra Dottin, regardless of the situation, looked imposing as usual.

That's it from us folks, but do join us on Saturday, 7th November as we will bring you the live coverage and over-by-over commentary from Trailblazers' clash against Supernovas. Adios.

Sophie Ecclestone: Trailblazers are a great team, real good bunch of girls. Think it’s about varying the pace. Some of the youngsters this year are great to be around. Teaching me quite a bit of Hindi.

Trailblazers captain Smriti Mandhana: We were really excited. We were really raring to play cricket after a gap of seven months. It was a good game. I was happy with Mithali’s decision, we wanted to have a look at how the wicket behaves. The bowling plans were according to the batters. I just told all the bowlers to keep it back of a length and stick to the stump line. We have a good spin attack. I was following IPL, so I thought we had a good bowling attack (with all the spinners). This is really going to help women's cricket.

Sophie Ecclestone (4/9) is the Player of the Match!

Deandra Dottin (29 not out): (Approach) Was to get the runs quickly because cricket is a funny game. (How she spent her lockdown) For me, talking to friends back home and watching some Netflix. (How will she spend her off day?) Yeah probably take a dip. Some recovery and probably rest up for the next game.

Mithali Raj, Velocity captain: (On decision to bat) I feel it is fine because when you have a fresh wicket, and your batters produced a good knock last evening, you’d want to bat. Would’ve loved to have the partnership going between Danni and Shafali, but unfortunately couldn’t get that in both innings. Then there was a collapse in the middle overs. It was a match to forget. I’m going to recover from this defeat, but it’s important to regroup. No team gets bad in one game overnight. Just cheer them up, because they would’ve felt a little sad.

DONE AND DUSTED! Trailblazers have thumped Velocity by 9 wickets. Smriti Mandhana’s women have been dominant right from the word go.They have finished off the chase in just 7.5 overs.

Richa Ghosh finishes it in style, with a massive six over deep mid-wicket.

FOUR! Dottin whacks it away towards deep mid-wicket for a boundary.

FOUR! Richa Ghosh swipes it away to the deep square leg fence. The young batswoman is showing what she is capable of.

Sophie Ecclestone (4/9) is the Player of the Match!

DONE AND DUSTED! Trailblazers have thumped Velocity by 9 wickets. Smriti Mandhana’s women have been dominant right from the word go.They have finished off the chase in just 7.5 overs.

Richa Ghosh finishes it in style, with a massive six over deep mid-wicket.

OUT! Trailblazers skipper Mandhana departs. She holes out to Jahanara at mid-on. Kasperek gets the breakthrough. Mandhana c Jahanara Alam b Kasperek 6(9)

OUT! Sophie Ecclestone returns to the attack, and dismisses Jahanara Alam lbw right away to grab her fourth wicket of the match! Looked plumb alright, the only doubt there would've been an inside edge. But Velocity have no review left to challenge this! Velocity are bowled out for 47!

OUT! Velocity are one wicket away from getting bowled out for a lowly total as Bisht prods the ball back in the bowler's direction, with Deepti holding on to a fine catch to grab her second wicket. VEL 45/9

OUT! Just when things were starting to look somewhat positive for Velocity, Pandey gets run out after a brief moment of confusion over a single. Excellent work by Mandhana at mid off and her throw to the non-striker's end is on point. VEL 41/8

OUT! Will Velocity get bowled out for less than 50 today? Certainly looks like it so far the way this innings has unfolded. Ball grips and turns after pitching along leg, and raps her on the knee roll on the front pad. Dibyadarshini goes upstairs after the umpire raises his finger right away, and the team lose their review after getting three reds on Hawk-Eye. VEL 27/7

OUT! Did I mention something about Luus mounting a rescue effort for Velocity today? Well forget about it. Luus chips the ball back to Gayakwad, offering the simplest of return catches, as her innings comes to a rather tame end. Timeout signalled after the wicket. VEL 27/6

OUT! Sophie Ecclestone's on fire! A dismissal not very different to that of Krishnamurthy, except this time Sushma misses the line of the delivery while looking to guide the ball behind square on the off side, getting her middle and off stump toppled. VEL 21/5

OUT! Wickets are tumbling thick and fast for Velocity as Wyatt drives straight to mid off to give Goswami her second wicket of the afternoon! Trailblazers are well and truly on top at the moment! VEL 19/4

OUT! Sophie Ecclestone's on a hat-trick as the ever-reliable Veda Krishnamurthy gets her middle stump knocked back while attempting a cut. VEL 19/3

OUT! Ecclestone gets rid of the Velocity skipper! Mithali gets struck on the back pad while looking to work the ball towards the leg side, missing the ball and getting trapped plumb lbw as a result. Easy decision for the umpire. Shaky start so far for the batting side. VEL 19/2

BOWLED! Jhulan draws first blood for the Trailblazers! Shafali was looking to guide the ball towards third man with the open face of bat, but got nowhere close to the line of the ball, which hits timber in the end. VEL 17/1

Mithali Raj wins the toss, and Velocity will bat first!

Women’s T20 challenge 2020, LIVE SCORE, Velocity vs Trailblazers latest updates: Sushree Dibyadarshini, right-arm off break, comes into the attack. Dottin is the mood to finish this in a jiffy. But it is young Richa Ghosh, who smacks a boundary off the last ball. Nine runs off the over. Trailblazers need 11 runs in 78 balls.

Preview: Following their opener against the two-time champions Supernovas, Mithali Raj's Velocity will be straight back in action on Thursday, taking on Smriti Mandhana's Trailblazers in match 2 of the Women's T20 Challenge 2020.

Mithali will be keen to lead from the front and avenge their 2019 defeat in which they lost by four wickets in a last-over thriller.

Velocity will rely heavily on 16-year-old Indian sensation Shafali Verma who grabbed eyeballs by hitting most sixes (nine) in the World T20 and finished as the fifth-highest run-scorer.

All the International players will making a return to the field after the COVID-19 break that followed the Women's WT20 in February-March. It will be interesting to see their fitness levels, coming back after enduring a lockdown.

The tournament will also feature Thailand's opening batswoman Natthakan Chantham, who scored her country’s first Women’s WT20 half-century. She became the first Associate cricketer to be a part of the tournament which is seen as a precursor to a full-fledged Women's IPL.

Supernovas were bundled out for 163 — the highest-ever total in the competition — before Pooja Vastrakar's 4/12 helped restrict the defending champions to 114/9.