Women's cricket in 2019: From embarrassingly low scores in T20Is to Ellyse Perry's and Australia's utter dominance, review of the year

Dubiously low scores were a feature at the ICC Women’s World T20 Qualifier in Scotland this year, where Bangladesh and Thailand emerged on top of the pile to book their tickets to Australia

2019, in women’s cricket, could well be looked at as a ‘bridge’ year — rarely do you witness a year that begins less than two months after one world event and ends less than two months prior to another, but that was the case for this year that has just gone by, sandwiched, as it was, by two T20 World Cups of great significance to the women’s game.

The 2018 edition, held in the Caribbean in November, was the first standalone Women's World T20 after four editions in the shade of the more-marketed men’s event. 2020, meanwhile, does see both the women and the men contesting T20 World Cups, both of which will be in Australia — with the women taking the first strike, towards the end of the ongoing summer Down Under, from 21 February to 8 March.

Unsurprisingly, T20Is did garner the greatest focus in 2019, both quantitatively and qualitatively — as many as 58 countries played women’s T20Is in 2019, with the top-9 teams contesting 45 games among each other.

No better place to begin a recap of women’s international cricket in 2019, then, than the shortest format of the game.

287 matches, featuring 58 teams: if cricket is to shed its ‘elitist’ tag someday, you could look back at 2019 as a starting point (women’s T20s for all ICC members were accorded international status in July 2018, making this the first complete year with increased participation).

But are the scales balanced? Is the field a level-playing one? These are vital questions for cricket to answer if it takes its global ambit with any amount of seriousness; on the evidence of the past year, the answers aren’t quite in the affirmative.

During their horror run at the Kwibuka Women’s T20 Tournament in Rwanda, Mali also conceded 314/2 and 285/1 — the two highest team totals in the format; the top four entries among highest women’s T20I scores, as indeed nine of the top-10 from that list, were registered this year.

When Pakistan had defeated Malaysia by 147 runs in a game in June 2018, it was, at the time, the biggest win (in terms of runs) recorded in women’s T20Is; that result now finds itself at 12th spot on the list.

Dubiously low scores were also a feature at the ICC Women’s World T20 Qualifier in Scotland this year, where Bangladesh and Thailand emerged on top of the pile to book their tickets to join Australia, England, India, New Zealand, Pakistan, South Africa, Sri Lanka and West Indies at the 2020 ICC T20 World Cup.

Among that section of automatically qualified teams — the top-eight, as per the year-end ICC rankings — Australia, England and New Zealand remain the teams to beat, with the three tasting a combined total of only three defeats from 25 T20Is in 2019. South Africa, India and Pakistan formed the middle of the pack, with the Proteas and the Indians ending the year with more wins than losses; West Indies and Sri Lanka, quite like their male counterparts, had years to forget in T20I cricket.

(Note: Analysis below considers major nations only, keeping parity of competition as a key marker)

Pakistan T20I captain Bismah Maroof led the run-scoring charts in matches among the top-nine ranked teams in women’s T20Is, amassing 459 runs from 14 matches at a healthy average of 41.72. Maroof, who did most of her batting at numbers three and four, was the only non-opener among the eight highest run-scorers in matches between the top-nine teams this year. Healy thumped 148* off just 61 balls against Sri Lanka at Sydney in Australia’s last T20I of the calendar — the highest individual score in 2019 — but the second entry on that list, from her captain, was arguably the knock of the year.

Meg Lanning smashed England’s reputed attack for an unbeaten 133 from only 63 deliveries at Chelmsford to set the tone for the T20I leg of the Women’s Ashes; 133/9 was what England managed in response to Australia’s 226/3.

In a year where India didn’t necessarily set the format on fire, their spinners were able to rule the roost. Radha Yadav, Deepti Sharma and Poonam Yadav finished as the leading wicket-takers in T20Is between the top-nine teams this year.

The spin trio, each different from the other, all conceded less than six per over while piling up a burgeoning tally of 56 wickets between them - slow left-armer Radha led the charts with 21 strikes in 13 games, while off-spinner Deepti and leg-break bowler Poonam returned 19 and 16 wickets, respectively, from 14 matches.

English seamer Katherine Brunt and South African pace-bowling all-rounder Nadine de Klerk rounded off the top-five, but the bowler of the year in women’s T20Is, arguably, was de Klerk’s teammate Shabnim Ismail - who scalped 14 wickets from 12 outings at an economy rate of 4.36, the best out of any of the 37 bowlers to finish with five or more wickets in 2019.

While we keep the limited filter of games between the major sides, one statistical impossibility from the rest of the pack merits its place in the sun. When the Maldives were embarrassing themselves on international debut at the South Asian Games, one Nepal bowler ensured her place in cricketing history books as well as among quiz aficionados: Anjali Chand, also on debut, took six Maldivian wickets from 13 balls, without conceding a run. That’s right: 2.1-2-0-6! (FYI: In the next Nepal-Maldives game, Chand produced figures of 4-3-1-4.)

Game of the Year The narrowest of those three losses — at Guwahati, in March — came in a game eerily similar to the 2017 World Cup final between the same sides.

The spinners had done a commendable job to restrict England to 119/6, and when Smriti Mandhana fell after spanking a 39-ball 58, India needed just 33 runs from seven overs, with seven wickets still in hand.

Enter panic of the same sort that had consumed India’s bid for a maiden world title at Lord’s two years earlier, and Kate Cross was the star for England as the visitors edged it out by a run.

Team of the Year

In 2017, Australia’s bid for a seventh World Cup title — out of just 11 editions in total — was halted by Harmanpreet Kaur’s once-in-a-lifetime special. The Aussies have played 18 ODIs under the inaugural ICC Women’s Championship cycle since, losing only once.

In 2019, they took the field in 12 one-dayers and won all of them. There were three-match series at home against New Zealand and Sri Lanka, and away in England and in the West Indies, all of which finished 3-0 to the six-time world champions.

Their next crack at the 50-over title might still be more than a year away, and the focus, for the time being, might well be on T20Is, but the Southern Stars are only travelling rapidly northwards each time they don their coloured kits. 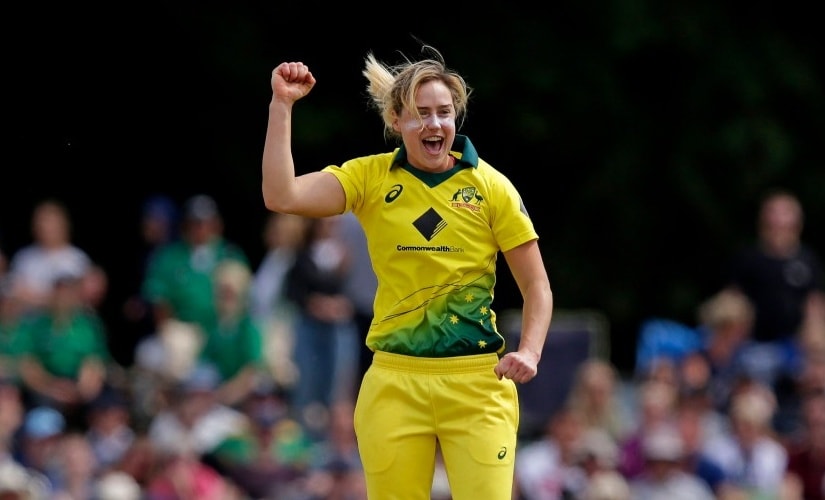 Leading Australia’s rampant charge was the leading women’s cricketer of the year — not for the first time, and surely not for the last — Ellyse Perry, who belonged in a different league to her peers. The numbers speak adequately enough: 441 runs and 21 wickets from 12 ODIs; batting average 73.50, bowling average 13.52.

India, runners-up at the previous 50-over World Cup, continued a consistent run of results, starting the year with impressive series wins in New Zealand and at home against world champions England, before closing things out with a home series victory over South Africa and an away one in the West Indies.

As in T20Is, West Indies and Sri Lanka were the most desolate of the major countries in ODIs too - the Lankans ended the year with nine losses out of nine in both formats.

On expected lines, the Aussies dominated the individual charts for the year, with four Australians among the eight highest run-getters in ODIs in 2019 — Alyssa Healy, Meg Lanning, Rachael Haynes and Perry.

Healy and England’s Tammy Beaumont were the only women to amass 600 runs — no other batter touched 500 runs in the calendar.

Smriti Mandhana only made seven appearances, but that didn’t stop her from making the top-10 for the year, as the Indian opener piled on 423 runs at an average of 70.50 and a strike rate of 94.63.

Mandhana, Healy and Lanning were the only players to average above 50 and strike at over 85 in ODIs this year, with a minimum qualification of 200 runs.

Perry’s 21 wickets put her third on the wicket-taking charts for the year and only two adrift of the top, which belonged to another Australian in Jess Jonassen.

One-third of Perry’s scalps for the year came in one irrepressible spell against England at Canterbury, where the all-rounder returned 7/22 — the fourth-best figures in the history of women’s ODIs. Left-arm spinner Jonassen, meanwhile, took four or more wickets on three occasions through the year.

Anya Shrubsole — England’s World Cup final star from 2017 — split the two Aussies atop the table, claiming 22 wickets from 15 outings, while Poonam Yadav and Jhulan Goswami gave India a dual presence in the top-five with 19 and 18 wickets, respectively, from 11 ODIs.

Perry’s all-round genius (441 runs + 21 wickets) gets highlighted further when you look at the relatively bare locker room of all-rounders in women’s ODIs over the course of 2019.

Keeping the same filter, there are only three instances of a player registering a greater difference between her batting and bowling averages in a year in women’s ODIs than Perry’s difference of 59.93 in 2019 (the first of those three entries, surprise surprise, is Perry herself from 2014).

Game(s) of the Year

Two neck-and-neck contenders for the honours for 2019 - although the word ‘honour’ might be a misfit seeing that one game was essentially a disastrous choke, and the other all but the same.

On 1 November, at North Sound, West Indies denied India by one run; a closer look at the scorecard will tell you India denied themselves a win, although Anisa Mohammed will beg to differ. Enterprising knocks from Priya Punia and Jemimah Rodrigues had India well on course in their chase of 226. The visitors were coasting at 170/2 in the 40th over. 50-odd runs needed at barely five per over with eight wickets in hand — what could go wrong? Everything did, from that point, and veteran off-spinner Anisa, having earlier accounted for Punia and Mithali Raj, knocked off the last two Indian wickets in a thrilling final over where she had only seven runs to defend.

Three days later, at Lahore, Bangladesh almost completed as bizarre a collapse; after bowling Pakistan out for 210, the visitors had pretty much closed out the game at 187/4 in 42 overs. 24 runs needed from eight overs with six wickets in hand. The next 28 balls, however, produced nine runs - and four wickets. Fortunately for Bangladesh, their tail bailed them out, and the winning run was achieved with one ball to spare and one wicket in hand.

Team of the Year

Tests: Whose patience are we testing?

The viewers who did make their presence felt in the only game of the year? Or the players, who, unless they are from England or Australia, effectively live in the knowledge that they will never have a longest-format career?

To the uninitiated, there was just one women’s Test match throughout 2019, and guess what? That’s one better than the tally for 2018. In fact, there were more years in the decade gone by than women’s Tests.

Only eight times through the 2010s did two international women’s teams contest a game of cricket lasting more than a day - and six of those were England-Australia clashes as part of the women’s Ashes (which now works in a cross-format style).

That solitary Test this year, in case you’re interested, was a drawn affair at Taunton’s County Ground.

Almost as many men’s Tests were played (partly, or in full) in the month of December 2019 alone as women have played through 2010. One way or the other, would it not help to take a clear stand on what direction women’s cricket needs to take with respect to the oldest format of this game?