Dinesh Karthik starred with a superb knock of 97 (62 balls, 8 fours, 4 sixes) as Tamil Nadu beat Bengal by 74 runs to notch up its fourth straight win in the Group 'C' of the Vijay Hazare Trophy cricket tournament.

Jaipur: Skipper Dinesh Karthik starred with a superb knock of 97 (62 balls, 8 fours, 4 sixes) as Tamil Nadu beat Bengal by 74 runs to notch up its fourth straight win in the Group 'C' of the Vijay Hazare Trophy cricket tournament on Tuesday.

Sent in to bat, Tamil Nadu was in a spot of bother at 123 for 5 in the 37th over before recovering to finish with 286 for 7 in 50 overs, thanks to a splendid century sixth-wicket partnership between Karthik and Shahrukh Khan (69 not out, 45 balls, 4 fours, 5 sixes). 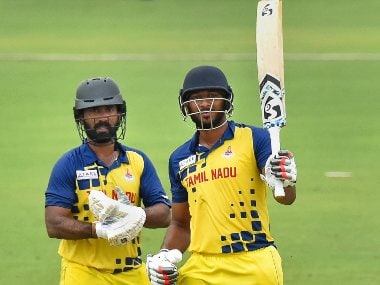 In reply, Bengal was bowled out for 212 in 45.3 overs, thanks to a disciplined effort by the TN bowlers.

He smashed the ball around but his effort was in vain as Vignesh, Natarajan and Aparajith stuck to their task.

Earlier, the Tamil Nadu skipper led the revival from 123 for 5 in the company of Shahrukh Khan, who smashed four boundaries and five sixes in his quick-fire 69 off 45 balls.

The two added 153 runs 12 overs, smashing the Bengal bowlers all over the park.

The Bengal bowlers had struck at regular intervals, starting with the dismissal of N Jagadeesan (8) in the 5th over.

Only B Aparajith (34) made a significant contribution among the top-order batsmen even as Dinda and the other bowlers kept chipping away.

However, the game was a reality check for young paceman Ishan Porel, who took six wickets in the game against Jammu & Kashmir on Monday, as he went wicketless in 10 overs giving away 55 runs.

In other matches, Gujarat posted an easy seven-wicket win over Rajasthan and Services put it across Railways rather comfortably.

Tamil Nadu is top of the points table with 16 from 4 games, followed by Gujarat (14).

Gurinder returned with figures of 4-0-19-3 as Sikkim were restricted to a paltry 111 for four after electing to bat in the rain-hit match that was reduced to 21-overs-a-side affair at the Rajiv Gandhi International Stadium.
Yashpal Singh (39 not out from 32 balls; 4x4s, 1x6) was the top-scorer for Sikkim, while Iqbal Abdulla (20 from 16 balls) and Palzor Tamang (13 not out from 14 balls) also made some contributions.

But it was not enough to propel their run-rate with the left-arm spin duo of Gurinder and Bipul Sharma (4-1-13-0) making a significant impact in the middle overs.

In reply, Chandigarh were cruising at 65 for no loss in 61 balls before losing quick wickets to be reduced to 106 for six in the penultimate over.

Needing six runs from the last over, Gurinder hit a boundary to seal four points and a first win for Chandigarh.

The other two plate group matches between Nagaland versus Meghalaya and Uttarkhand versus Manipur were abandoned with each team securing two points each.