Catch the Live score and updates from the third ODI between Sri Lanka and West Indies taking place at the Pallekele International Cricket Stadium.

Preview: After losing the first two matches, West Indies will look to salvage pride by winning the third and final ODI against Sri Lanka at the Pallekele International Cricket Stadium. 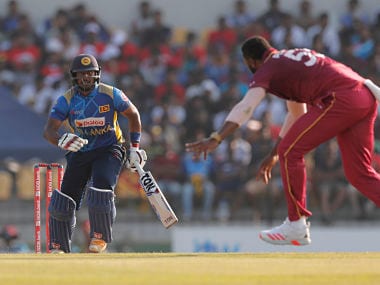 After losing the first two matches, West Indies will look to salvage pride by winning the third and final ODI against Sri Lanka. AP

West Indies, led By Kieron Pollard, lost the first ODI by just one run and then suffered a 161-run defeat in the second match. Batting has been a big let down for the Windies with only Shai Hope performing to the standards. He scored a hundred and a fifty in the two matches they played.

Windies spinners also failed to make an impact in the series while their fielding has also been below par.

Everything is going as per the plan for Sri Lanka so they would look to maintain the winning momentum by clinch victory in the final ODI. Angelo Mathews didn't have the best of series so he'll be under scanner to perform in the match.

Teams batting first have won last three of the four matches at Pallekele so toss will play a crucial role.