Royal Challengers Bangalore and India captain Virat Kohli on Friday said he was happy with the kind of players picked by his franchise during the IPL auction and looking to enjoy "the best form of cricket by playing bold".

New Delhi: Royal Challengers Bangalore and India captain Virat Kohli on Friday said he was happy with the kind of players picked by his franchise during the IPL auction and looking to enjoy "the best form of cricket by playing bold".

During the IPL auction held in Kolkata on Thursday, RCB bought eight players, including the likes of Chris Morris, Aaron Finch, Kane Richardson and Dale Steyn. 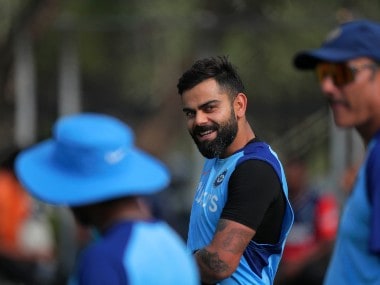 "I am very happy with the players that we have selected and really looking forward to the new season. We've had a lot of discussions on the structure and balance of the team and this looks like a good start for us," Kohli said.

"I believe it all comes down to every individual to give out their best performance during the league and to enjoy the best form of cricket by playing bold," he added.

RCB's Director of Cricket Operations Mike Hesson said the plan of the franchise in the auction was to look at players that will combine well with the retained squad.

"We want a squad that can have balance and adapt to any conditions both at home and away. To pick players who help us maximise our budget judiciously took a thoughtful approach. I am very pleased with the way auction went," he said.

"We wanted the majority of our overseas players to bring plenty of international experience in order to add and share knowledge with the exciting developing talents we already have at RCB. When we look at any overseas player to bring to RCB, it's not only about talent, but where else can they contribute," he added.

Hesson termed Finch a hugely experienced player who not only adds plenty of skill but also a calm head to the team.

"Chris Morris and Isuru Udana both provide all round packages being able to bowl at any time in the innings, especially death overs. Kane Richardson and Dayle Steyn have the ability to take wickets in the Power Play and bring some hostility and experience to our attack.

"We have picked a local talent in Pavan Deshpande who provides us batting cover, his power and flexibility where he bats is a very useful addition to the squad."

RCB Chairman Sanjeev Churiwala said his franchise had wanted a balanced squad that embodies the philosophy of RCB, a bold and fearless attitude to project the best cricket in the tournament.

"I am glad that we have managed to assemble a team of some of the strongest T20 players and with the guidance of Mike, Simon and other coaching staffs, we have a very good set of combinations that drives the RCB proposition for a great season."

RCB have not won the IPL title in the 12 editions so far. They were runners-up in both 2009 and 2011 to then Deccan Chargers and Chennai Super Kings respectively.